President Obama announced in a video recorded Tuesday afternoon that he would protect Alaska’ Bristol Bay and nearby waters – a region of the Bering Sea that’s been at the center of longstanding Environmental Protection Agency campaigns – from oil and gas exploration.

Published on December 17, 2014 by Charles Digges 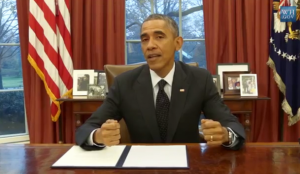 President Obama announced in a video recorded Tuesday afternoon that he would protect Alaska’ Bristol Bay and nearby waters – a region of the Bering Sea that’s been at the center of longstanding Environmental Protection Agency campaigns – from oil and gas exploration.

In 2010, Obama issued a temporary protection from oil and gas exploration that was set to expire in 2017.  Obama’s order on Tuesday closes a body of Arctic water roughly the size of Florida from oil and gas rigs and platforms indefinitely

The bay is the most productive salmon fishery in the world.

“I took action to make sure that one of America’s greatest natural resources and a massive economic engine for not only for Alaska but for America, Bristol Bay, is preserved for future generations,” Obama said. “It’s something that’s too precious for us to be putting out to the highest bidder.”

“Under the authority granted to me under Section 12(a) of the Outer Continental Shelf Lands Act … this withdrawal prevents consideration of this area for any oil or gas leasing for purposes of exploration, development or production,” Obama said. In recent weeks, it appears Obama is going for broke on his administration’s environmental legacy.

“While big petroleum’s slogan currently is ‘little time, a lot to take,’ Obama focuses on saving a pristine part of Alaska’s coast for future generations,” said Bellona President Frederic Hauge. “This shows American’s that it’s not useless to fight to keep vulnerable areas safe from the fossil industry.”

Ozone is a byproduct of burning fossil fuels, and restricting it would affect energy-intensive industries like oil refineries, manufacturers using fossil fuels or fuel sold to consumers. Ozone has been shown to cause respiratory and circulatory problems.

The powerful oil lobby the American Petroleum Institute – of which Norway’s Statoil is a part – opposes the proposed ozone restrictions, arguing industry still hasn’t caught up to 2008 ozone standards, which proposed 75 parts per billion of ozone.

Obama’s revived commitment to climate change was also on display in Lima, Peru’s climate summit last week when he dispatched Secretary of State John Kerry to the negotiations. Kerry had brokered a deal with China committing Beijing and Washington to joint emissions cuts by 2020.

Though the summit fell short of hopes, the US contribution to squeezing a concrete commitment from China was groundbreaking.

Obama’s order on Bristol Bay puts US – and hopefully international – oil giants on notice that drilling in sensitive Arctic conditions is simply too big a gamble for the environment.

The Alaska Department of Natural Resources has said the area is believed to hold significant amounts of oil and gas but that only a small number of exploratory wells had been drilled, the Politico news portal said.

All the same, The Hill reported, Bristol Bay had not been seen as a major target for the next five-year leasing plan that the Interior Department is working on. Oil industry groups have expressed more interest exploring for oil and gas in Alaska’s Chukchi and Beaufort Seas.