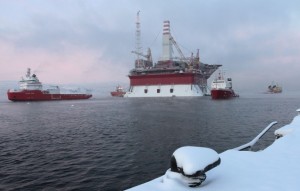 With the shipment, Gazprom, owner of the Prirazlomnaya platform, unveiled its new brand Arctic crude blend called ARCO. ARCO, is of lower quality than the main Russian export from the Urals and will cost less.

More importantly, and of much great concern to environmentalists, is that Gazprom has drawn the first vial of black blood from above the Arctic circle, an environment  that years of studies and analyses have concluded is far from fit for industrial oil operations.

The Russian state barely has any infrastructure for dealing with an oil spill in the Arctic region, and even with cleanup equipment on hand, any accidents would be potentially devastating. Even Royal Dutch Shells miscalculations over potential environmental damage has caused the company to kill off its Arctic programs in the US, and CononcoPhillips has also put its Alaskan coastal projects on indefinite hold.

According to Greenpeace Russia’s energy programs director, Vladimir Chuprov, Gazprom is posing a threat to the entire region for the sake of selling a miserly amount of low-grade crude.

But Russia is moving ahead, believing Arctic oil to be a critical ingredient in maintaining its position as major player – safety, apparently,  be damned.

“There is a more than likely chance of an oil spill resulting from the operation of the Prirazlomnaya platform,” Viktor Petrov, head of the Kola Center for the Defense of Wildlife said in an interview. “Even in the event of a medium size spill, oil would coat the entire aquatic area of the Pechora Sea, and in Arctic conditions, oil products will continue to be present for hundreds of years.”

Gazprom won’t even reveal its own plans for dealing with oil spills in the Arctic, wrote Greenpeace’s Ben Ayliffe in a blog post on the organization’s website. The organization posted a video of several safety issues on the Prirazlomnaya, from a loose escape ladder, to a doddering support vessel ramming into its side to allegations of drunkenness of the platforms crew to youtube last year.

The condition of the $4 billion Prirazlomnoye platform is itself circumspect. A ramshackle amalgam of second hand Norwegian parts fused together by the Sevmash shipyard with unworkable Russian rigs brought in from the Kara Sea, the platform sat rusting for years before it was brought to the field.

Mikhail Krutikh, a partner at the RosEnergy consulting firm called the building of the Prirazlomnaya platform  “20 years of shame.”

In an interview with TV Rain, Russias independent internet station, he said the platform was built in 1995, but then pulled apart again in 1996 because “the project was absolutely abominable.” Foreign investors, first from Austria, then from Germany exited in turn from the project because it was “an absolute economic failure.”

Last fall 30 Greenpeace activists tried to stop production preparations at the platform before being arrested and charged with piracy. The charges were later reduced to hooliganism, but the charges were dropped and the activists released under a larger amnesty granted by Putin to political prisoners in December in a last ditch effort to clean up Russia’s human rights record before the Sochi Olympic Games.

In light of it’s the Prirazlomnaya’s condition, many experts had predicted the commencement of production from it in 2014 would be impossible. Indeed, as Russian news portal Gazeta.ru reported last year, the Prirazlomnaya’s opening dates for commercial production were previously postponed twice, in 2012 and 2013, over safety concerns. But drilling the Arctic has long been a centerpiece of Putin’s economic development plan, and emphasized in statements that the Arctic oil rush was officially on.

“The start of loading the oil produced at Prirazlomnaya means that the entire project will exert a most encouraging influence on Russia’s presence on the energy markets and will stimulate the Russian economy in general and its energy sector in particular,” he said during his videolink, according to the transcript posted on the presidential website.  “This is, in fact, the beginning of our country’s enormous work on oil production in the Arctic.”

Gazprom said in a statement that the first shipment will head to a large European energy company, though did not disclose the company’s name. After increasing the production volume from the Prirazlomnoye field, part of the crude will be sold on the basis of long-term contracts.

Prirazlomnoye field is located south of the Novaya Zemlya Archipelago, 60 kilometers off the coast Russia’s Nenets Autonomous Region. It was discovered in 1989 and has since become a central obsession in Russia’s Arctic oil ambitions.

The field is estimated to hold 72 million tons of recoverable oil. This year, some 300,000 tons – merely 0.06 percent of Russia’s annual oil production – will be shipped out from the waters that are ice-covered for seven to eight months a year, said the Barents Observer news portal.

The entire Arctic is estimated to hold one-third of the world’s remaining undiscovered oil and gas resources, most of that offshore. The International Energy Agency’s recommendation that keeping global warming below two degrees Celsius means keeping more than 60 percent of proven oil reserves – to say nothing of unproven one in the Arctic – has made Russia’s Arctic oil fever a major headache for the climate community, Climateprogress reported.

The cost of the project doesn’t seem to balance out either.

“The cost of a barrel of oil on the platform itself is $40,” said Krutikh in his interview with TV Rain. “Transporting it in small tankers is very expensive and geometrically raised the price of the oil. If the price of oil per barrel falls to $80 or $90, the project will not be profitable at all.

Nick Cunningham, an analyst for oilprice.com, wrote that “Putin clearly believes that the Arctic is an essential ingredient in its ability to maintain its position as one of the world’s largest oil producers,” adding that the Prirazlomnaya field is poised to backfire economically.

“Russia’s Arctic prize won’t be as big as many think,” he wrote, adding that,  “The project is costly and would not have been economical if the Russian government had not granted it special tax breaks.”

“But, even with heavy backing by the government,” Cunningham continued, “Gazprom estimates that the field will only be producing 120,000 barrels of oil per day, beginning in 2020. That would only add about 1% to Russia’s oil production.”

Cunningham concluded that “the Arctic suffers from high costs, severe weather and a lack of infrastructure, all of which will make it exceedingly difficult to turn the region into a major source of oil production.”

Both Chuprov and Krutikh agreed that the rush to bring a tiny amount of substandard crude to market from the Prirazlomnaya platform was sooner a political than an economic move.