MURMANSK—Greenpeace’s icebreaker, Arctic Sunrise, still in Russian impound, may become an environmental threat for Kola Bay if it remains unattended, Greenpeace warned at a press conference on Monday, where it also called “inhumane and humiliating” the conditions in which the arrested crewmembers, activists, and journalists are being held in Murmansk jails.

Published on October 8, 2013 by Anna Kireeva, translated by Maria Kaminskaya 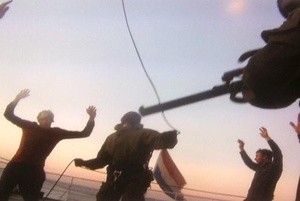 While meeting all international safety criteria, Greenpeace’s icebreaker Arctic Sunrise is fast becoming a significant environmental risk for Kola Bay, Dmitry Artamonov, a Greenpeace coordinator and head of the organization’s temporary office in Murmansk, said at a press conference on Monday.

“The ship has been left uninhabited, with no one watching over its systems,” Artamonov, who also heads Greenpeace Russia’s toxics campaign, told journalists.

The Arctic Sunrise has been in Russian custody since armed Russian security agents abseiled onto the ship from helicopters on September 19 and arrested both the ship and the 30 crew and passengers on board, after two activists from the ship attempted to scale the prized Prirazlomnaya oil rig – which is owned by state gas monopoly Gazprom’s oil wing – in a protest against oil drilling in Arctic waters. 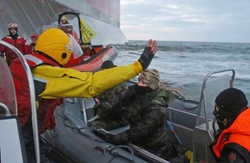 Russia is prosecuting all thirty from the Arctic Sunrise for piracy – a charge carrying up to 15 years in prison and a 500,000 rouble fine ($15,500) – while the vessel remains impounded, anchored in Kola Bay outside of the city of Murmansk.

“The icebreaker either needs to be serviced continuously or all of its systems must be mothballed, or there will be serious malfunctions, or even flooding. This could lead to 200 tons of diesel fuel ending up in the bay’s waters,” Artamonov said.

According to Artamonov, there is already an understanding of the situation among representatives of Russia’s Investigative Committee, who three days ago delivered the ship’s chief engineer, Mannes Ubels, who is a Dutch national, to the icebreaker to examine its condition.

In an October 4 letter addressed to the head of the Investigative Committee, Alexander Bastrykin, and distributed in Russian translation at the press conference in Murmansk, Ubels said that the ship’s generator, which provides power for the vessel’s systems, is at risk of shutting down, taking all but the ship’s standby system down with it.

“Our ship, the Arctic Sunrise has been seized and by this been put under your responsibility,” Ubels wrote at the beginning of his letter (quoted here verbatim). “As CHIEF ENGINEER OF THE Arctic Sunrise I need to make you aware of the risks involved in this situation. Soon, if not already the generator, generating the ships electricity, will stop running. With this, also all the ships main functions will stop working, apart from secondary system.”

“The ship will no longer have a alarm system and common leakages of sea water into the engine room will no longer raise alarms,” the letter continued.

Ubels further described the risk of the downed generator eventually allowing seawater to enter the vessel and asked Bastrykin “to consider to allow me to take care of the ship to avoid greater damage or worst case sinking of our ship.”

Listed below this request in Ubels’s letter are a number of specific problems that could be expected to develop if the ship remained unattended.

“We demand that engineers be brought immediately on board, or all responsibility for the environmental catastrophe will lie with the [Russian Federal Security Service’s] Border Guard Service. We are not so much concerned about the ship as we are for the waters of Kola Bay,” Artamonov said.

Artamonov also said it was the discretion of the Investigative Committee to revoke the court’s chosen pre-trial restrictions.

The Arctic Sunrise flies the Dutch flag, and two arrestees – Ubels and campaigner Faiza Oulahsenof – of the thirty that remain in Murmansk jails on piracy charges brought by prosecutors are Dutch nationals.

On October 4, the Netherlands launched arbitration proceedings against Russia under the UN Convention of the Law of the Sea to secure the release of the thirty arrestees, a statement by Greenpeace International said. A Reuters report cited Dutch Foreign Minister Frans Timmermans as saying the Dutch government was contesting the “unlawful manner” in which the ship was intercepted and would seek the release of all its passengers.

The Dutch government could “ask the Tribunal on the Law of the Sea for temporary measures for the release of the ship and its passengers,” if the arbitration does not result in their release, Timmermans said, according to the Reuters story.

An October 7 story by the Independent cited Greenpeace International lawyer Alexander Mukhortov as saying Greenpeace also intends to file police reports over the illegal seizure of the Arctic Sunrise and alleged theft of valuables from the ship.

Held in pre-trial detention in Murmansk are twenty-eight Greenpeace activists and two freelance journalists – Russia’s photographer Denis Sinyakov, who has worked for AP, Reuters, and Bellona, and the British videographer Kieron Bryan.

Sergei Golubok, a Greenpeace International lawyer, told journalists at Monday’s press conference that the defense had been able to meet with everyone in detention on piracy charges.

He also shared details of the conditions in which the detainees were being held.

According to Golubok, it was very cold in many of the cells, and the activists – especially the Brazilian deckhand Ana Paula Alminhana Maciel and the Argentinians, activist Camila Speziale and second mate Miguel Hernan Perez Orz– dreaded the coming of the northerly Polar Night and the acclimatization to the prolonged lack of daylight.

Murmansk, a major Russian city on the Kola Peninsula, in Russia’s far north, is inside the Arctic Circle, meaning that it is plunged into almost complete darkness from late November until mid-January. The outdoor temperature in Murmansk currently holds at between -1° and 7 °C during the day.

Many of the detainees, according to Golubok, have begun experiencing health problems, but vitamins are not allowed in care packages that detainees are permitted to receive from outside, as vitamins are classified as medication and require a physician’s authorization. However, the physician, according to Greenpeace’s information, says no authorization is needed and declines to sign any.

Many activists also have problems with access to drinking water. Drinking water is either not allowed in or is counted toward the monthly 30 kilograms permitted in a care package received by an inmate.

“In order to make water that they are given in [pre-trial detention] drinking water, it has to be boiled, and providing access to a portable water boiler also represents a problem,” Golubok said.

According to Golubok, a number of the detainees are being transported multiple times from pre-trial detention in Murmansk to a remand prison in the regional town of Apatity. The transportation, which takes several hours, is done in paddy wagons that are not suited for the purpose. “They are hauled like chickens from a poultry farm,” Golubok said.

CCTV cameras that many cells are equipped with cover an area of view that includes the toilet facilities, which causes the detainees great discomfort.

The main problem, according to Golubok, is the language barrier, which prevents the prisoners from exercising what meager basic rights they are being afforded in detention.

“The activists are simply cut off from the rest of the world because they cannot communicate with anyone – no one in the remand jails speaks English, even, they cannot read books, etc.,” Golubok said.

The detainees have the right to make calls to their families, at the detainees’ own expense, but they are required to speak only in the language that the jail personnel understands. The guards, however, understand no other language but Russian.

Inmates are entitled to buying items in the prison’s shop and to use the library, but written requests in Russian have to be filed for permission to do either.

“Naturally, the library only has books in Russian. The organization Bellona has brought a huge parcel of books in foreign languages for the prison’s library, but we have no certainty that [the books] have reached it,” Golubok said.

The defense is asking that the court rescind the pre-trial detention order and release the detainees on bail or place them under house arrest, with the latter measure allowing the detainees to await trial proceedings on board the Arctic Sunrise or in rented apartments or hotel accommodations provided by Greenpeace.

At the press conference, describing the treatment of the thirty held under arrest in Murmansk, Golubok called their conditions “inhumane.”

“The lack of necessary resources on the part of the remand jails and the Investigative Committee is not a reason to fail to abide by standards and infringe on prisoner rights,” Golubok said.

Greenpeace announced on Monday that it will file a case over the treatment of the thirty detainees with the European Court of Human Rights as early as this Wednesday, following the organization’s appeal later on Monday against a court’s refusal to place those detained under house arrest, the Independent said in its Monday story, citing Greenpeace Russia’s program director Ivan Blokov.

But even as Greenpeace’s representatives spoke of violations of the foreign citizens’ rights in Murmansk pre-trial detention centers, they also noted a surprising bright side that the detainees’ ordeal has brought to the fore: The activists’ cellmates are welcoming the opportunity to learn a foreign language, showing a keen interest in environmental problems and human rights – and are starting to wonder about their own rights.

“If the activists spend more time in pre-trial detention, we will soon have a very different jail population,” Golubok said at the press conference.

Meanwhile, Russia’s reaction to Greenpeace’s protest attempt at Prirazlomnaya has sparked an international outcry, with celebrities and common citizens worldwide bringing pressure on Russia to free the group jailed in Murmansk.

On October 5, solidarity protests swept across the globe, with events planned in more than 135 locations across 45 countries. Participants demanded that Russia withdraw piracy charges and release the group arrested on board of the Arctic Sunrise.

According to Greenpeace, one million people have also sent letters to Russian embassies demanding the immediate release of the arrested.

Maria Kaminskaya contributed to this report from St. Petersburg.