In an announcement surprising only in its tardiness, the Russian Investigative Committee said yesterday it discovered hard drugs aboard Greenpeace’s Arctic Sunrise vessel, which the Russian Coast Guard took by force on Sept 19 after two activists tried to scale a Russian oil rig to protest Arctic drilling.

Published on October 10, 2013 by Charles Digges 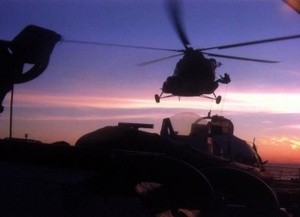 In yesterday’s statement, infused with an appropriately stiff facsimile of indignation, Investigative Committee chair Vladimir Markin, said that, “During a search of the [Arctic Sunrise], drugs (apparently poppy straw and morphine) were confiscated.”

“In view of the data obtained while investigating the criminal case, charges are expected to be adjusted,” the committee said. It added that “a number of detainees will be presented with charges of committing other grave crimes.”

Greenpeace rightfully mocked the new allegations. “The Investigative Committee ‘found’ narcotics. We are waiting for it to find an atomic bomb and a striped elephant,” it said on Twitter. “This is possible in Russia these days and can hardly surprise anybody.”

Despite the stereotypes the Investigative Committee is counting on to grow this opium field of accusations, international maritime law – as dictated by the World Health Organization (WHO), and enforced by the International Labor Organization (ILO) – makes it illegal for certain classes of vessels not to carry their fair share of smack-based happy pills.

And the list of medications available in a ship’s sickbay doesn’t stop at morphine, a heavy opium based painkiller. The list provided by the WHO suggests a number of other opioid derivatives that are the stuff of junkie shopping in any typical urban emergency room, highly addictive downers like Valium, and a slew of other mother’s-little-helpers that have a higher value on the street than the Arctic Sunrise would have at auction.

Further, the ILO doesn’t require that these drugs be dispensed by a doctor on many classes of ships, which makes the presence of a bona fide physician among the Arctic Sunrise’s detainees, as confirmed by both Greenpeace and the Investigative Committee, a nearly air-tight defense against the imbecilic new allegations.

Pursuant to that, Greenpeace yesterday issued a completely believable statement saying, “We can only assume the Russian authorities are referring to the medical supplies that our ships are obliged to carry under maritime law.”

Just as laughable to anyone who’s been to high school and experimented with drugs are the Investigative Committee’s assertion that “dual-purpose” equipment was found on the Arctic Sunrise, that “could be used not only for ecological purposes.”

I am assuming from that little vagary that Russian authorities are postulating that the chemistry set for measuring various ecological hazards reportedly aboard the ship was used for smoking or injecting narcotics, or mixing various concoctions in the spirit of Breaking Bad meets Lillyhammer.

But knowing the vessel could be boarded at any time by not only the Russian Coast Guard, but Norwegian customs officials – whose zero tolerance drug policies are legendary – I would, had I been a member of the crew, fallen back on less elaborate and obvious paraphernalia than a beaker bong.

Many were the evenings at one of America’s more prestigious universities that friends and I whiled away in the haze of smoke emanating from a potato bong or a Coke can pipe. Needless to say, the university had a fairly low tolerance for drugs, and any student’s dorm room could be entered by campus police at any second on the least suspicion of drug use – a situation quite more dire than seeing a Russia Coast Guard vessel approaching from dozens of kilometers away, giving the crew time to flush its contraband.

And we were recycling to boot.

Greenpeace has issued its refutations of the Investigative Committee’s allegations and I tend to believe them.

“Any claim that illegal drugs were found is a smear, it’s a fabrication, pure and simple,” Greenpeace said.

The Arctic Sunrise operated out of Kirkenes, Norway, which, as a country, has as dour a drug policy as you are likely to find this side of Malaysia. And Norwegian customs, which has searched the boat many times, found nothing untoward prior to its departure to the September 18 protest at Prirazlomnaya.

I would go even further than Greenpeace to call the drug allegations total rubbish. Russian cops stopping pedestrians and planting drugs on them is one of the oldest routines in their stale shake down repertoire. White bags of powder have routinely been planted by customs officials in the luggage of Western pop acts coming to tour Russia, as happened with REM.

The band’s front man, Michael Stipe, refused to pay a bribe to get the guitars and drums our of impound and ran a nationally televised apology to his Russian fans, who each received a full refund for their tickets from the band.

But what is at stake with these new allegations? Isn’t this getting a little embarrassing? For all intents and purposes, the activists’ Murmansk jailers couldn’t hope for a more compliant crowd.

Representing 18 nationalities, none but four of the detainees even speak Russian. In light of the nearly medieval conditions in which they are being kept, the activists have made few complaints. Some are legitimate issues that must be addressed on a human rights level. Others are hopelessly, almost endearingly, naïve.

On the serious end, detainees are allowed to call family and friends, but only in Russian – in order that the calls can be monitored – which only five of them speak.

The same applies for making requests for basic amenities while in detention. The jailers can furnish items from the jailhouse store and library, but only if the request are written in Russian.

The language barrier alone is argument enough to make Greenpeace International director Kumi Naidoo’s offer of himself to Russian authorities in exchange for bail conditions for the jailed activists seem reasonable.

It would, further, be easy enough to house the activists from Argentina, Australia, Brazil, Canada, Denmark, Finland, France, Italy, the Netherlands, New Zealand, Poland, Russia, Sweden, Switzerland, Turkey, the UK, Ukraine, and the United States aboard the Arctic Sunrise itself, or in rented apartments or hotel accommodations provided by Greenpeace.

Lastly, it would save Greenpeace the embarrassment of some of the more entitled complaints activists have lodged – for instance, having to share cells with Russians, or not being offered a vegan alternative to the mucoid gruel that is standard fare in any Russian prison.

On the whole, though, this is not some attempted legal uprising by a bunch of jonesing smack-heads. They are clear minded complaints based on western perceptions of personal freedom.

The implication that they are drug runners or pot-heads – coming in the third week of jail time that is getting harder to justify – is obviously a labored gasp from the Investigative Committee to muddy the piracy charges and substantiate further grounds for the Artic Sunrise crew’s prolonged detention.

But Markin is shooting from the hip when citing the modest discovery of morphine – especially when the WHO and the ILO make it internationally unlawful to carry anything less potent. It’s time to get to the business of letting the activists go with time served, and unforgettably memories of their Russian sojourn – which will likely seem more hallucinatory than any drug could make them.