UPDATE: As activist vessel arrives in Russian port under Coast Guard tow, all on board threatened with piracy charges

As the Greenpeace vessel Arctic Sunrise arrived in the northern Russian port of Severomorsk near Murmansk, authorities said that 30 activists from 18 different countries on board would be charged by Russia’s Investigative Committee of “piracy undertaken by an organized group,” Bellona has learned.

Published on September 24, 2013 by Charles Digges 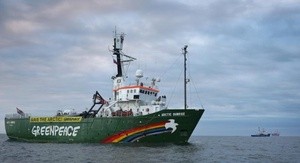 Whether the ship will be towed further to Murmansk remained unclear as of this writing, but a Greenpeace statement Tuesday also confirms the Arctic Sunrise has now arrived in Severomorsk, 25 kilometers north of Murmansk, accompanied by a tugboat and the Russian Coast Guard vessel Ladoga.

One of Greenpeace’s Russian Arctic program coordinators, Yevgenia Belyakova, said that the Arctic Sunrise entered the waters of the Kola Gulf off Murmansk around 7:00 am local time. The arrival, which had been anticipated yesterday, was delayed by heavy weather.

The ship “is opposite the city of Severomorsk, around 20 kilometres from Murmansk. The Arctic Sunrise is being pulled by a (Russian border guards) tugboat,” Belyakova said in an e-mailed statement.

“An investigation has already begun aboard the vessel,” a representative of the Murmansk division of the Federal Security Service, or FSB, told reporters.

The vessel last week mounted what activists are insisting was a peaceful protest in international waters against the Prirazlomnoye oil rig, owned by Russian natural gas monopoly Gazprom, in the Pechora Sea near the Novaya Zemlya archipelago.

“The Arctic Sunrise was not in neutral waters, but in the Exclusive Economic Zone of the Russian Federation,” FSB press spokeswoman Liliya Moroza told Rossiskaya Gazeta.  “The activists who moved toward the platform violated the 500-meter protected zone around the platform, which is a state installation.”

But independent legal experts and Greenpeace itself have said that this assessment is incorrect, and have asserted that the Russian Coast Guard’s raid of the vessel was illegal and the threat of the piracy charge is unfounded.

Article 227 of Russia’s penal code defines piracy as “an attack on a ship at sea or on a river, with the aim of seizing someone else’s property, using violence or the threat of violence.

On Wednesday September 18, two Greenpeace activists tried to scale the rig with protest banners while the Russian Coast Guard, controlled by the FSB – the successor organization to the KGB – fired 11 warning shots across the bow of the Arctic Sunrise.

Early on Thursday, some 15 armed FSB officials in balaclavas boarded the boat by rappelling from helicopters and arrested the crew and began towing it toward the Russian seaport of Murmansk, according to activist accounts from the vessel.

No further transmissions have been made by the activists since the ship was arrested and put under forcible tow toward Russian waters.

Spokesman Vladimir Markin of the Investigative Committee – whose activities are akin to those of the US FBI – said a criminal probe for piracy undertaken by an organized group had been opened over Greenpeace’s September 18 protest on Prirazlomnoye rig.

“It should be noted that all persons who attacked the (oil) platform, regardless of their citizenship, will be brought to criminal responsibility,” Markin said in a statement, according to Murmansk’s TV 21(in Russian) news site.

The Investigative Committee’s statement further indicated that investigators will question all who participated in the event and that those who were most active in the protest will be arrested and bail or remand conditions set.

“Investigative actions will be conducted in strict accordance with the norms of Russian legislation and international law,” he was further quoted as saying. Piracy carries a 15-year jail sentence in Russia, plus a 500,000 ruble ($15,500) fine.

Erland Tellnes, Greenpeace Nordic’s Arctic advisor told Bellona in a telephone interview that “no formal charges had been filed by the Russians” against the Greenpeace activists. Greenpeace international repeated the same in several statements issues since the boat was taken by the Russian coastguard, saying that their legal counsel has received no notification of formal charges.

“Despite certain media reports saying otherwise, our activists have not been formally charged with anything by Russian authorities,” Truls Gulowsen, Head of  Greenpeace Norway said in an emailed statement. “Any charge of piracy against peaceful activists has no merit in international law. We will not be intimidated or silenced by these absurd accusations and demand the immediate release of our activists.”

The Dutch-flagged Arctic Sunrise had been monitoring the exploration activities of Gazprom since August in the hope of exposing the dangers of drilling for oil in one of the world’s great nature reserves.

Greenpeace has said the Russian authorities “are holding 30 of our activists,” though that figure was has yet to be confirmed by Russian officials.

The Tuesday Greenpeace statement read further that: “Greenpeace International lawyers are demanding immediate access to the 30 activists who have been held for over four days without legal or consular assistance.” The environmental organization’s statemet said its protest against “dangerous Arctic oil drilling” was peaceful and in line with its “strong principles.”

“Our activists did nothing to warrant the reaction we’ve seen from the Russian authorities,” it read.

Bellona strongly agrees that the Prirazlomnoye rig is an environmental hazard that is completely incapable of drilling the Arctic safely. Bellona joined 50 Russian NGOs in signing a joint statement calling for the activists to be released.

“Given the extremely high social importance of environmental security in the Arctic, as well as the exclusively peaceful nature of the action to the protesters, public organisations of Russia and the CIS urge you to release the crew of the ship Arctic Sunrise and activists are on it,” the NGO statement read in part.

The Investigative Committee’s Markin described the protest at Prirazlomnoye in a statement as “an attempt to seize a drilling platform by storm” and said it raised “legitimate doubts about [the activists’] intentions.”

The ship “was loaded with electronics whose purpose was not clear,” his statement said.

Markin said the actions of Greenpeace could have led to an accident that would have damaged the fragile Arctic environment, and criticized the activists for carelessness.

“It’s hard to believe that the so-called activists did not know that the platform is an installation with a high hazard level, and any unauthorized actions on it can lead to an accident, which would not only endanger the people aboard it but also the ecology, which is being protected zealously,” his statement read.

Greenpeace spokeswoman Maria Favorskaya told the Associated Press later on Tuesday that the activists were ordered  to prepare to leave the ship. The Interfax news agency reported they were bused later in the day to the Investigative Committee’s headquarters in Murmansk.

Last year, six activists from the Arctic Sunrise boarded the Prirazlomnoye rig and occupied it for 15 hours, but at that time, Russian authorities only observed and made no arrests.