Murmansk’s Lenin District court Sunday sent the remaining eight Greenpeace activists and crewmembers who participated in a protest against Russia’s Prirazlomnoye oil platform in Barents Sea to two months in remand jails, where they will join the other 22 activists who were sent to detention on Thursday.

Published on September 30, 2013 by Charles Digges 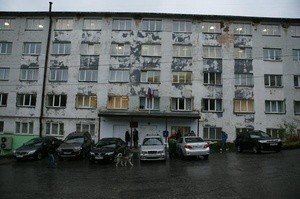 The cases of the eight activists and crewmembers were set-aside for 72 hours during marathon hearings to gather more information. The hearings on Thursday stretched late into night and ordered 22 of those aboard the Arctic Sunrise to area pretrial holding facilities.

Despite signs on the doors of the Murmansk court indicating that it is not in session on weekends, the hearings on the eight remaining activists and crew nonetheless pressed ahead Sunday, consequently jailing all who were aboard the ship.

Russia’s Investigative Committee – akin to the American FBI – is seeking to charge those involved in the protest with piracy, among other offenses, and the activists, crew and two journalists are being held pending the investigation.

Piracy, as defined by article 277 of Russia’s penal code entails “an attack on a ship at sea or on a river, with the aim of seizing someone else’s property, using violence or the threat of violence. A conviction carries a 15-year jail sentence and a 500,000 ruble ($15,500) fine.

None of the activists or others aboard the ship has been charged with a crime.

But Alexander Nikitin, chairman of the St. Petersburg-based Environmental Rights Center Bellona, was not at all surprised that Sunday brought the remand of all aboard the vessel.

“If environmentalists and human rights activists or other organizations plan activities in Russia against installations that are guarded, then they must be prepared to sit in jail,” Nikitin said Monday. “Russia is a country that is run by its security structures and Russian courts will always be on their side.”

Nikolai Rybakov, Director of ERC Bellona noted Monday in and interview with Radio Svoboda (in Russian) that Bellona was one of the first organizations to sign a petition to Russian President Vladimir Putin, appealing for the release of the activists.

Putin himself last week seemed to signal that the piracy charges were too severe, but lauded the Coast Guard for intercepting the Arctic Sunrise. Answering follow up questions, Putin’s spokesman Dmitry Peskov directed reporters to the investigative committee and emphasized that Putin could not charge anyone with a crime, a move that distances the president from the eventual outcome.

The state-prized Prirazlomnoye platform has long been a source of friction between the environmentalists and the Russian state, and Bellona has been vocal against its launch.

The platform, which belongs state gas monopoly Gazprom’s oil subsidiary, is the first offshore rig in the Arctic. It was deployed to the vast Prirazlomnoye oil field in the Pechora Sea in 2011, but its launch has been delayed by technological challenges.

Gazprom said this month it was to start pumping oil this year, but no precise date has been set.

Gazprom has also been steadfast in its resistance to holding a public dialogue on the environmental wisdom of drilling oil on the platform, which Bellona and other environmental organizations have argued is structurally unsound.  The platform itself is constructed of second hand Norwegian materials added to Russian rigs that were never completed, but were sent to the neighboring Kara Sea.

“I understand the Greenpeace activists’ frustration, seeing that the authorities have no intention of even beginning a discussion on the situation in the Arctic,” Rybakov told Radio Svoboda. “The authorities are only discussing the problem among themselves.”

He added that, “Without question, the Greenpeace action was an attempt to draw the attention of the public and the government to this problem.”

Armed invasion on the high seas

The Russian Coast Guard – which is commanded by the FSB, the successor organization of the KGB – foiled an attempt on September 18 by two of the activists aboard the Arctic Sunrise to scale Prirazlomnoye platform owned by Russia’s state-controlled gas monopoly Gazprom to call attention to the environmental risks of drilling in Arctic waters. The Russian Coastguard fired 11 warning shots over the bow of the activist ship, according to Greenpeace reports.

The next day, the Coast Guard seized the Arctic Sunrise by sending some 15 armed and masked FSB agents down rappelling ropes on to the deck of the ship. They then towed it to the port of Severmorsk, near Murmansk, with the crew and activists aboard.

Greenpeace insists the boarding of the vessel was illegal, saying that while the vessel was located within the European Economic Zone during the invasion, it had not intruded on Russian territorial waters. Russian authorities have countered that since the Arctic Sunrise had come within 500 meters of the state oil rig, the coast guard acted correctly by invading the vessel.

According to observers of the open court proceedings who spoke with Bellona, Greenpeace Thursday attempted to post 1 million rubles ($30,000) bail per activist, which the court turned down.

According to Russian law, Greenpeace has five days last Thursday to appeal the pretrial detention, something Greenpeace Executive Director Kumi Naidoo said in a statement the group intended to do.

Greenpeace Russia campaign director Ivan Blokov described   the seizure of the ship to Australia’s The Telegraph newspaper as “the most aggressive and hostile act” against the environmental organization since French government agents bombed the Rainbow Warrior ship in 1985, killing one man.

Peter Willcox, the American who captained the Rainbow Warrior, also is the captain of the Arctic Sunrise. He, too, was ordered held in custody for two months at Thursday’s hearings in Murmansk.

Violations of free press called out

Two among those who are being held have no connection to the protest action – freelance photographer Dmitry Sinyakov, and British video reporter Kieron Bryan.

Bryan, according to international journalists’ protection organization Reporters Without Borders, has worked in the past for two British newspapers, The Times and The Mirror, and for California-based Current TV, but has been working as a freelance reporter and filmmaker since January.

“Sinyakov was arrested while working as a journalist and his detention constitutes an unacceptable violation of freedom of information,” a Reporters Without Borders’ statement said. “By investigating this photographer and the Greenpeace activists he was accompanying on such an absurd accusation as piracy, the Russian Investigative Committee is criminalizing both journalists and environmental activism.”

How will Russia prosecute 30 activists of 18 nationalities?

The activists represent 18 different nationalities. Those ordered jailed on Sunday include Dima Litvinov, Greenpeace International spokesman, who has dual US and Swedish citizenship; Finnish activist Sini Saarela, who was one of the two who tried to scale the platform; two British activists; two Dutch citizens; a Brazilian deckhand and a Ukrainian cook.

Those who were sent to two-months pretrial custody on Thursday are four British citizens, four Russians,  and two each from Argentina, Canada, and New Zealand. The Arctic Sunrise’ captain, Willcox, is American, and the other detainees come from Australia, Italy, Denmark, Switzerland, Turkey, Poland and France.

Rybakov shed light on how unwieldy it would be for the state to prosecute a case against activists of 18 different nationalities.

“Do they really intend to hand out 10-year sentences to citizens of 18 countries for trying to defend nature?” said Rybakov. “How will our country look then? Do they really want to do that?”

Rybakov suggested it would be more reasonable for Gazprom to have invited the activists on board the Prirazlomnoye and shown them “how ecologically [they were] carrying out the process.”

“This would have been a small step from the side of the authorities,” Rybakov told Radio Svoboda. “The would have out-played Greenpeace – now the government is, lightly put, not in the best situation.”