Officials from Russian law enforcement agencies and environmentalists have gathered in Murmansk to await the expected arrival of a ship of activists who were arrested at sea for trying to occupy the controversial Prirazlomnoye oil platform in the Pechora Sea near the Novaya Zemlya archipelago.

Published on September 23, 2013 by Charles Digges 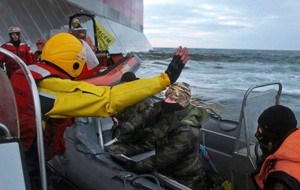 Greenpeace’s Arctic Sunrise ship, under tow by the Russian Coast Guard, is expected to put into Murmansk port Monday, although stormy seas could delay the arrival until Tuesday, Greenpeace told Bellona.

No one has been able to contact the activist aboard the vessel since Thursday. At stake for the activists could be charges of terrorism and piracy levied against them by the Russian government, some Russian law enforcement bodies have said.

Last Wednesday, the international group of activists aboard the Arctic Sunrise vessel launched several rubber rafts containing trained climbers who attempted to board the oil rig.

The Russian Coast Guard, which is controlled by the FSB security services, fired what were 11 warning shots over the bow of the Arctic Sunrise, Ben Ayliffe, the head of Greenpeace International’s Arctic oil campaign, wrote in his blog Friday.

Jumping from helicopters and rappelling down ropes, more some 15 armed Russian coastguard workers boarded the Arctic Sunrise late Thursday night and took custody of the activists on board to stop them from disrupting the work of the Prirazlomnoye rig, activists told Ayliffe by satellite telephone during the raid.

The Prirazlomnoye platform is owned by Russia’s state owned natural gas monopoly Gazprom, and the company expects the rig to come online soon.

Activists said in various statements issued by Greenpeace last week that they were trying to stop Gazprom from becoming the first company to produce oil in the Arctic region.

Bellona has led numerous other organizations in speaking out against the rig, which it says doesn’t begin to measure up to environmental standards required for oil recovery in the Arctic.

After a scuffle between the activists and the Russian security forces, the 29 activists, of various nationalities, including Russians, Britons, Dutch, Canadians, two Australians and at least one American, are apparently being held on board at gunpoint, while the ship is under forcible tow to the port of Murmansk, according to various international media.

According to statements from the Russian coastguard, the captain of the Arctic Sunrise, which flies a Dutch flag, was refusing to operate the ship, so an official boat was towing the it west towards Murmansk.

As of Monday, the Arctic Sunrise’s crew remains in the custody of armed Russian security forces and could be charged with terrorism and piracy according to Russian officials. This will become clearer later today when the ship is expected to put into Murmansk port.

Russia’s Investigative Committee’s, which investigates serious crimes in Russia, has signaled it may press the piracy charges the hardest.

Greenpeace International’s General Counsel Jasper Teulings said in a statement that the Russian Investigative Committee’s announcement that it was considering charges of piracy for the group was not valid and “smacks of desperation.”

Russian Presidential Chief of Staff Sergei Ivanov told journalists in Stockholm that Greenpeace had “acted too radically” and compared its protest to “Somalian-style piracy,” he was quoted by news.com.au as saying.

Greenpeace has meanwhile established a working center in Murmansk to greet the crew, Vladimir Chuprov, the head of Greenpeace Russia’s Arctic programs, said.

Greenpeace insists the ship was in international waters when it was boarded, and said they had receive no formal notification of possible charges, nor offers of access to legal or consular assistance.

The ship was 34 nautical miles from the closest Russian shore, according to the activists, which would put it in an area known as the Exclusive Economic Zone of Russia but not in the country’s territorial waters.

Ayliffe told the Guardian that he heard shouts and banging while in communication with the vessel during the Russian Coast Guard boarding.

One activist aboard the vessel told Reuters that the armed officials shouted that, “we are the FSB” and forced the activists to gather in one place.

“They used violence against some of us. They were hitting people, kicking people down, pushing people,” Faiza Oulahsen, one of the activists aboard the ship, said in a call to Reuters on Thursday evening.

That, according to most media outlets and Greenpeace, is the last contact anyone has had with the activist vessel since Thursday.

The FSB was reported by the Guardian as saying it had been tracking the Arctic Sunrise since it left the Norwegian port of Kirkenes last Saturday, and turned off its radio signals. The FSB said the ship changed course and began heading for the Prirazlomnaya platform.

When the ship’s captain ignored the warning shots and refused to turn back or respond to commands on Thursday, the FSB told the Guardian that it decided to launch the raid.

Activists from the Arctic Sunrise boarded the Prirazlomnoye rig last year, but at that time, Russian authorities only observed and made no arrests.