A court in Murmansk has remanded to custody all 30 members of a Greenpeace protest action, which involved an attempt to board a prized Russian oil platform from the group’s Arctic Sunrise vessel in the Pechora Sea last week, while Russian authorities seek to charge the detained activists with piracy.

Published on September 27, 2013 by Charles Digges 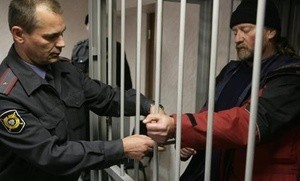 Russia’s Investigative Committee – a rough equivalent of the American FBI – meanwhile will continue investigations to levy the piracy charges against them, reported the Murmansk based news portal Russkaya Planeta.

The other eight from Greenpeace’s Arctic Sunrise icebreaker face new hearings on Monday after judges ruled that they needed further information on their activities during the protest.

In total, six of the detained activists are British, four are Russian, two each come from Argentina, Canada, the Netherlands and New Zealand.

Russian investigators have accused the Greenpeace activists of piracy after two of them tried to scale state gas monopoly Gazprom’s Prirazlomnoye oil platform in the Pechora Sea on September 18, but none of those detained have been formally charged with any crime.

Bail turned down, but could be achieved on appeal

Greenpeace Executive Director Kumi Naidoo said the environmental group would appeal the detentions, which by Russian law, the group has five days to do.

“We will not be intimidated, we will appeal these detentions, and together we will prevail,” Naidoo said in a statement.

According to legal observers who attended the open court proceedings, Greenpeace was said to offer 1 million rubles per activist for bail, which was turned down by the court.

But legal observers say that if the appeals process is successful, the activists could be free under bail and guarantees of their respective consulates, and allowed to spend their pre-trial time living with other Greenpeace activists, in specially designated area hotels or even aboard the Arctic Sunrise, which is in any case under guard.

This would be preferable to doing what is in effect hard time in any of the crumbling, overcrowded and illness-ridden pretrial jails in the Murmansk region.

The court proceedings were nonetheless described by observers as “respectful and polite.”

“There were no interruptions or quarrels, the judge and prosecutors were very careful to explain the activists their rights,” said one observer who asked not to be identified. The observer nevertheless explained that among the foreign activists, especially, a sense of “hopelessness” and “helplessness” prevailed.

“It didn’t take long, once the judge started handing out pretrial detention, to sink in that all of them would receive the same decision,” said the observer. “They remained calm and composed, but were obviously shocked.

Greenpeace’s Russian representatives complained that the detainees were given inadequate interpretation services during the hearing.

Despite the apparent professionalism of the proceedings as described by those who attended the public hearings, Bellona is nonetheless outraged by the detentions.

“The actions of the Russian law enforcement authorities have far surpassed what would be expected for such a protest, and the Murmansk court’s actions are completely disproportionate,” Xenia Vakhrusheva, of the St. Petersburg-based Environment and Rights Center (ERC) Bellona said.

“The entire incident is an example of what awaits any foreign activists who come to Russia, and a warning for Russian activists in general,” she said.

Nonetheless, Vakhrusheva did not envision that any of the activists would end up serving 15 years of Gulag time for piracy.

“They won’t all be sentences for piracy, this is just to scare them, though they will most likely be left in remand while the investigation continues,” she said. She speculated that the verdicts that would eventually be handed down would let the activists off with time served.

Especially piquant to the Russian media was the detention of Russian freelance photographer Denis Sinyakov who was working for Greenpeace at the time of the mass arrests. Several Russian news websites, including that of the state-owned NTV national television channel blacked out all their photographs of the activists on Friday in protest the detention of Sinyakov, a former staff photographer at AFP and Reuters.

“Denis Sinyakov’s being accused of piracy and his preliminary detention for two months will probably become a precedent in the history of Russian journalism,” the Vedomosti business daily warned in an editorial.

Greenpeace also said that a British videographer, Kieron Bryan, was also among those detained for two months.

The Russian Coast Guard, controlled by the FSB – the successor organization to the KGB–fired 11 shots over the bow of the Arctic Sunrise.  Early on September 19, the Coast Guard staged a commando style raid on the ship, sending 15 armed and masked agents down rappelling ropes from a helicopter and order the boat to change course to Murmansk.

Captain Peter Willcox, former captain of Greenpeace’s Rainbow Warrior refused, and the Arctic Sunrise was put under forcible tow to the port of Severomorsk, 25 kilometers north of Murmansk, where it arrived late Tuesday.

The activists were then bussed to area jails to await Thursday’s remand hearings.

The Thursday court proceedings against the activists did not conclude until 2:21 a.m. Friday morning Murmansk time, the portal, which delivered a live feed of the custody hearings, said.

The activists’ prolonged detention has elicited withering criticism from the international legal community.

Caroline von Gall, a professor at the Institute of European Law at the University of Cologne and a respected authority on the Russian legal system, told Deutche Welle that the situation is “incredibly absurd.”

Article 227 of Russia’s penal code defines piracy as “an attack on a ship at sea or on a river, with the aim of seizing someone else’s property, using violence or the threat of violence. The penalty for piracy is 15 years in jail and a 500,000 ($15,500) fine.

Von Gall said the activists would have to be accused of attempting “the appropriation or possession of property.”

She also said that: “The act must have occurred through violence or the threat thereof.”

Bellona’s Vakhrusheva said that none of the conditions that would facilitate a piracy charge are present, adding that the Russian authorities” need proof of motive to overtake the platform and of violence, and which simply doesn’t exist here.”

She noted that only two Russian citizens had tried to actually scale the controversial Prirazlomnoye platform with protests banners.

President Vladimir Putin has meanwhile tried to distance himself from the proceedings.

“I don’t know the details of what happened there,” Putin told reporters Wednesday at an international conference in Salekhard, Russia, “but obviously they are not pirates. However, formally, they tried to seize our platform.”

In light of Putin’s all-out assault against Russia’s NGO community since his third term as president began, it’s easy to forget that he expressed in a ruminating interview in 2001 with Canada’s Globe and Mail his own desire to hop in a rubber dingy to do battle against environmental evil.

“To be honest, I’ve always admired people who devote their lives to environmental problems. I’ve watched with astonishment as a group of people on a little boat try to oppose a huge military or industrial ship. I must say this inspires only sympathy.”

Considering what he would do when his terms expires, Putin said, “It is a noble task to support the ecological movement. At least I wouldn’t be sorry to spend time on it.”

If Putin is reelected to a fourth term in office, it likely will not be until 2024 that he will exhibit his flare for derring-do by scaling an Arctic oil platform.