MURMANSK –Scientists in Murmansk Region in Russia’s far north are working on a map showing where Kola Bay, a fjord in the Barents Sea just off the northern coast of the Kola Peninsula, is most susceptible to oil spills and most in need of protection during oil pollution cleanup – hoping to create what is deemed a much-needed tool for better environmental safeguarding of the area.

Published on June 13, 2013 by Alexey Pavlov, translated by Maria Kaminskaya 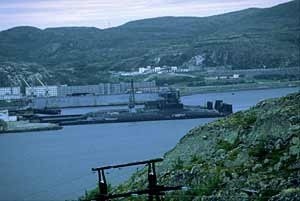 The map, dubbed “Kola Bay Vulnerability Map,” is needed for the comprehensive management of this natural area and more efficient and safe use of natural resources, while also serving the important purpose of helping to protect the coastal territory of the Kola Peninsula from the harmful effects of oil spills.

The map is hoped to help minimize the damage arising from oil spills and cleanup operations. The threat that such damage may occur is becoming all the more palpable with the increasingly heavier tanker traffic in the Barents Sea.

The Kola Bay Vulnerability Map is being put together by scientists at the Murmansk Marine Biological Institute (MMBI), of the Kola Scientific Centre of the Russian Academy of Sciences. The researchers are confident that the map is needed urgently – waiting until disaster strikes is not an option. The work, however, requires substantial funding, something that neither the state nor regional authorities can provide.

“The problem is that Kola Bay is a federal property, so the local administration is not authorized to spend its own funding on it, and the state clearly doesn’t feel like doing it,” MMBI’s head of Engineering Ecology Laboratory Anatoly Shavykin, who holds a PhD in Engineering, told journalists at a press-conference at the Murmansk Regional Duma, the region’s local parliament.

The necessary funding was allocated by the Russian Geographical Society, which issued a grant for research in Kola Bay so that MMBI scientists could gather the needed information.

The creators of the map hope their work is going to be appreciated by state authorities and that the map will be included into the official oil spill elimination plans for Kola Bay.

So far, such maps are not even required for oil spill elimination plans in Russia. Murmansk Region’s authorities only have general maps of the Barents Sea at their disposal – maps that Shavykin believes are simply not specific enough and thus completely ill-suited for the purpose of responding efficiently to oil spills.

According to Shavykin, these maps have to show distribution of wildlife populating the habitats of the waters and seafloor of Kola Bay, as well as the locations of social infrastructure and industrial sites. And they must show those spots that are most vulnerable to oil pollution, as well as spots that can be sacrificed in order to preserve the most valuable areas.

“If we don’t have such maps, oil will have to be cleaned up irrespective of the consequences,” Shavykin said.

The scientists’ work has already been commended by Murmansk Region’s ecological organizations, which have long been warning of the immense risks that the area remains exposed to because of the growing transportation and transshipping of oil products in the region.

The first expedition that MMBI researchers undertook in Kola Bay for the oil spill vulnerability map project took place late last May, and several more are to follow. When all the necessary information is gathered, the scientists will add it to the data collected earlier when they were creating the “Interactive Map of Vulnerability of the Coastline of Kola Bay.”

The aggregated data will then yield a comprehensive Kola Bay Vulnerability Map.

MMBI researchers expect this work to be completed at the end of 2013 or beginning of 2014.