Almost three years after the Gullfaks C event – an event described as perhaps the most serious oil drilling near miss on the Norwegian shelf in recent years – the state’s attorney yesterday unveiled Norway’s second largest ever environmental fine in connection with Bellona’s investigation of the incident. 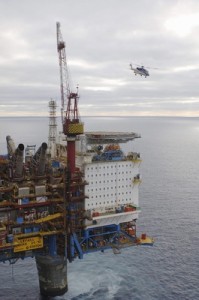 Statoil was fined for breaking petroleum laws when it lost control of an oil well at the Gullfaks C platform in May 2010. Prosecutors hope the size of the fine will drive home the serious nature of the incident that some believe could have led to disaster.

“Thirty million kroner ($5.5 million) is the second-largest environmental fine in the history of Norway after the Snorre A disaster, said Bellona President Frederic Hauge, who reported Statoil to police for environmental crimes over the Gullfaks C incident because of its major accident potential.

“Bellona is satisfied with the prosecution’s decision. The judgment however is limited to corporate liability, and we marvel that findings for personal criminal liability were not included in the judgment,” said Hauge. “People should have been imprisoned for these gross violations of regulations.”

Bellona is also critical that the prosecutor stated that the time that has elapsed since the incident in 2010 means that the fine is lower than it would otherwise have been.

“It is unacceptable that a long investigation should benefit those who commit environmental crimes. Prosecutors must increase their level of activity on the Norwegian continental shelf and work to avoid that cases of environmental crime become so protracted, as we have seen here,” said Hauge.

“It is good to see that prosecutors have set the remedy [for such crimes] at such a high level. The oil industry attempted to ridicule Bellona for our investigation of the matter, and Statoil’s communications department tried to put a lid on the incident using some highly questionable methods. I was also wrongly harangued by [Statoil CEO] Helge Lund at a Statoil garden party in Stavanger, who yelled at me for supposedly overstating the case,” said Hauge.

“This judgment [against Statoil] is a confirmation that Statoil is a company that does not learn from past events,” said Hauge.

On May 19, 2010 the alarm on the Gullfaks C platform in the North Sea. A hole in a pipe that allowed liquids from a well being drilled to leak into the formation it was being pumped from. Hydrocarbons streamed into the well, forming gas that reached the platform. An evacuation of 89 non-critical people from the platform was initiated as the situation continued to worsen throughout the day.

On November 19, 2010, Norways Petroleum Safety Authority (PSA) concluded in its report on the leak that it was bare coincidence that the leak did not end in a blowout.

“The report confirmed what Bellona was a lone voice in claiming when [the incident] happened, that this was an event with really major potential for an accident,” said Hauge. “The extent of damage would have been great for people, the platform and not least the environment.”

The state’s attorney for the Rogaland Burrough in southwestern Norway believes that Statoil violated Norwegian petroleum law on three points:

-There were deficiencies in decision-making during planning and drilling;
– There was not enough expertise used in planning and risk analysis of the drilling operation.
– Planning of drilling was insufficient.

“Statoil has put safety and environment to the side for an extended period and systematically ignored a number of serious safety conditions. For today, this is getting punished,” said Hauge, who concluded that it is important to punish the oil industry when the rules are broken.

Prior to the evacuation of Gullfaks C, a number of problems with pressure increases in the annulus outside the well were noticed, as well as loss of drilling fluid and gas ingress. The PSA’s investigative report also revealed that gas levels just before 6 p.m. on May 20th were so high that drilling mud was circulating upward, creating the possibility of an explosion.

Similarities between  Gullfaks C, Snorre A and Deepwater Horizon

Frederic Hauge has previously drawn parallels between the Gullfaks C incident, the Snorre A incident in 2004, when there was an imminent danger of a gas explosion, and the Deepwater Horizon explosion in 2010, which dumped 4.1 million barrels of oil into the Gulf of Mexico over 87 day.  And Hauge continues to repeat the comparison.

“There are similarities here that we cannot ignore. Inadequate monitoring and understanding of notifications is one aspect,” said Hauge.

“In all [of these ]cases, the instruments issued signals that something serious was underway and getting worse, but nobody recognized the signals or followed them. Another very serious point is the lack of cooperation between the various specialist groups on board [the rigs and platforms] – poor communication has led to disastrous decisions and miscalculations,” says Hauge.

“It is discouraging to see Statoil’s Lund repeat, each time this type of incident occurs, that now they will learn and draw on the experience to prevent similar incidents from occurring again,” said Hauge. “But Gullfaks C is again a flagrant example how they don’t learn anything – if they had applied the lessons of Snorre A, it is unlikely that the incident at Gullfaks C would have taken place.”

Problematic well at the Gullfaks C

May 19, 2010: The alarm sounds on the Gullfaks C platform. Gas is flowing uncontrollably into the well and onto the platform’s deck. Non-critical personnel totaling 89 people are evacuated the following day.

Statoil loses large amounts of drill mud in underground formations and the pressure situation becomes unpredictable. Well control is lost as drilling fluid is lost in formations. Hydrocarbons flow into the well and gas escapes onto the platform.

July 14, 2010: Production resumes on the platform for the first time in the nearly two months since the incident.

Well 34/10-C-6, has long been difficult to handle. When the pressure change occurred on May 19, 2010, it was the third critical event in five months in the same well.

November 22, 2010: Prosecutors decide to take up an investigation of Statoil.

March 20, 2013: A sum of 30 million kroner ($5.5 million) in corporate penalties is assessed against Statoil for violations of Norwegian petroleum law.