In a record criminal payment, British oil company BP will plead guilty to 14 criminal counts, including manslaughter, and will pay $4.5 billion over five years in a settlement with the Justice Department over the April 20, 2010, Deepwater Horizon drilling disaster in the Gulf of Mexico that killed 11 people and unleashed the worst offshore oil spill in US history.

Published on November 16, 2012 by Charles Digges 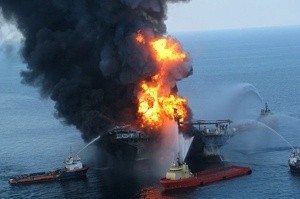 A Justice Department spokesman told Bellona Thursday evening by phone that BP still faces even bigger penalties from federal civil charges, including those under the Clean Water Act after the 4.9 million barrel spill.

The Justice Department also attached faces to the disaster, filing manslaughter charges against two BP rig supervisors and obstruction charges against a BP executive who allegedly lied to Congress. The three are not covered by the BP settlement.

But despite the towering payment to settle all the criminal liabilities resulting from the rig explosion and oil spill – plus its offering up of two rig supervisors to face manslaughter charges and one of its executives to be tried for obstruction  – payments by BP due to US Gulf Coast residents are far from squared.

Evidence of the disaster remains along Gulf shores as revealed by August’s Hurricane Isaac, which washed up tar balls and crude traceable to the BP spill along Gulf beaches – many of which had still not been cleaned when Bellona visited the area in October.

What we’ve seen was disgusting,” said Jonathan Henderson of the nonprofit Gulf Restoration Network, who catalogued oil on East and West Ship Islands off Mississippi’s coast, about 20 kilometers north of Gulfport. He recounted seeing heavy deposits of tar balls that washed in from offshore. He also reported that he saw oil below wind- and wave-battered sand.

Disaster far from over

“It is only proper that BP should bear heavy financial responsibility for their negligence,” said Bellona President Frederic Hauge, who was on site with other Bellona staff for the Deepwater Horizon spill. “But they are not paying nearly enough, and their hopes that throwing money at this disaster will make it go away has been proved wrong – the fact is, we have no idea how long we will be dealing with this spill’s repercussions.”

Indeed, many courts in Alaska, site of the 1989 Exxon Valdez oil spill, are still adjudicating payments of the some $3 billion put up by Exxon for damages. Years of delays in higher courts, which both raised and lowered the damage claims helped the company dodge billions more in penalties set by lower courts.

The current claims against BP dwarf the settlements arrived at in the Exxon Valdez spill. Add the $4.5 billion in criminal settlements to the $6.5 billion BP has paid on claims from individuals and businesses that suffered from the spill, and the $7.8 billion it agreed to cough up to settle further such claims and the bill – excluding cleanup costs – has hit some $19 billion so far.

Many on Gulf of Mexico still feel the pain

But when measured against BPs most recent annual revenue statement of $246.1 billion, and its current market capitalization of $100 billion, according to recent investors’ reports from the oil giant, residents of Gulf states interviewed Friday morning by Bellona say the company is selling them out cheap in its efforts to restore their lives and environment.

A quick look at the math provides an explanation of their fury: With a total worth of $346.1 billion, the $4.5 million in criminal damages plus the $14.3 billion in damage equals less than 6 percent of BPs current estimated value.

“I lost a hell of a lot more than six percent of my company after the spill and I didn’t even do anything to help cause it,” Cliff “Buster” Johnson, skipper of the Roll Tide shrimping vessel based in Bayou Labatre, Alabama told Bellona by telephone Friday morning. “I lost about 5000 percent of it.”

Johnson first met with Bellona reporters in May or 2010, when the spill was in its 19th day.

That May, Johnson offered up his vessel and crew to assist in clean up efforts. Of his six-man crew, five, including himself were buried in medical bills for lung ailments – called ‘BP cancer’ along Gulf Fishing communities – contracted by BP’s liberal use of the oil dispersant Corexit, which is not approved by the US Environmental Protection Agency (EPA).

In fact, the EPA ordered BP to stop using Corexit just days into the spill – an order BP ignored. Corexit is manufactured by the Illinois-based Nalco company, whose board of directors consists mainly of ex BP and Exxon executives.

Some 2 million gallons of Corexit, which is four times as toxic as the oil it is meant to disperse, was dumped on the Deepwater Horizon spill.

That oil was driven to the bottom of the Gulf of Mexico, where reports from the University of Southern Georgia say – and recent evidence from Hurricane Isaac prove – it still lies.

Johnson filed for part of the $6.5 billion kitty BP put up for damages when he and his crewmembers began coughing up blood and experiencing severe abdominal and chest pain in late 2010, but the checks never came.

He said he was told at the time that, “what we got couldn’t be traced directly to the spill.” This was typical for the time.

Hundreds of dead dolphins that washed up on Gulf shores that were sent to Mississippi’s Institute for Marine Studies for necropsies were not counted among wildlife deaths related to the spill – even though respiratory hemorrhaging consistent with over-exposure to Corexit was observed, said Dr Riki Ott, a marine toxicologist who documented dozens human deaths among cleanup workers related to oil dispersant complications following the Exxon Valdez wreck.

During the Deepwater Horizon disaster, Dr Ott said in interviews that people were already dying from Corexit exposure.

“Solvents (dispersants) dissolve oil, grease, and rubber,” she told Bellona during its coverage of the spill. “Give this evidence, it should be no surprise that solvents are also notoriously toxic to people, something the medical community has long known.”

When three of Johnson’s crewmembers were hospitalized with respiratory complications from which they have not recovered, and other bills began to spiral out of control, he sold his $400,000 vessel at a 40 percent loss.

“There might be enough to bury me if we sell the house,” said Johnson. “But I don’t expect we’ll see any of that criminal money to cover my sick friends.”

“It’s a spit in the face,” continued Johnson. “My whole business is gone because of what they did.”

Johnson raises a good point: Despite a resounding federal level victory against an enormous mutli-national corporation, the settlements say nothing about improving deep water drilling and clean up practices.

And while Johnson voluntarily staked his livelihood to help reclaim the fishing grounds that fed his family, BP’s payout of five percent of its current value over what could easily become decades hardly seems to be fair compensation.

“I would have lost everything if I’d ever screwed up at sea like they did,” he said. “I lose a buddy at sea and I gotta close my doors. These guys blow it on what they are suppose to be doing for a living, and they lose pocket change.”

Johnson said he will file suit – again – for part of the other $7.5 billion in damages payments put on the table by BP, but doesn’t expect quick action.

“They’ll do like they did in Alaska,” he said, referring to the Exxon Valdez spill, where an estimated $1 billion in damages are still under adjudication. “They’ll pay out when we’re in the ground.”