Most oil that appeared along Gulf of Mexico shores in the wake of August’s Hurricane Isaac has been traced to be remnants of crude that gushed from the Macondo well during BP’s 2010 Deepwater Horizon disaster, area marine laboratories and BP have confirmed.

Published on October 9, 2012 by Charles Digges 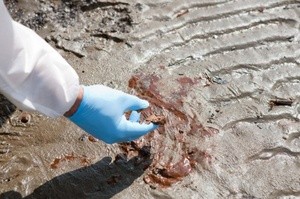 Louisiana, Alabama, Florida and Mississippi were last month hit by tar balls and oil exposed by waves from the hurricane, which made landfall at the mouth of the Mississippi river on August 28.

Laboratories from across the states affected by the hurricane – and previously oil sludge from the  Deepwater Horizon explosion, the largest oil spill in US history – said to Bellona in emails that their own independent chemical analyses revealed that most of the oil found along beaches in the coastal states had come from the Macondo well.

Tests run at Louisiana State University for state wildlife officials confirmed that oil found on Elmer’s Island and Grand Isle, near Venice, Louisiana, matched the biological fingerprint of the 4.9 million barrels of oil that gushed out of the well over a 55 day period after the BP operated Deepwater Horizon rig exploded off the coast of Louisiana, killing 11.

LSU chemist Ed Overton said the oil found on Elmer’s Island had not degraded much while oil at Grand Isle had.

“Both were good solid matches on Macondo oil,” Overton said.

Joel Hayworth, a researcher with Auburn University in Alabama confirmed that that tar balls collected in his state after Isaac were also associated with the type of oil spilled during the Deepwater Horizon accident.

BP owns up to the oil

BP said oil from its spill had been exposed by Isaac’s waves and that the company would work to clean it up.

Mike Utsler, head of BP’s Gulf Coast Restoration Organization, said in a statement late last month that oil had been found “buried in isolated stretches of shoreline” during cleaning before the storm hit. Isaac, he said, churned up some of that mess.

“In July 2010, early in the cleanup, Tropical Storm Bonnie pushed tons of sand toward the shore, burying some of the oil we were working to clean up,” Utsler said in the statement. “Now, two years later, Hurricane Isaac has moved sand again and uncovered some buried tar mats.”

The initial discoveries of oil along Gulf coastlines led to a 20 kilometer shutdown of beaches along Elmer Island, and shut down commercial fishing along Louisiana’s coastline, reported the New Orleans Times Picayune.

Crude situation in Mississippi not on radar

Less well publicized are beach closures in Mississippi that still remain in effect.

“The beaches are still covered with junk from Isaac, and the sand that is usually pure white has an orange-yellow color to it,” said Barbara Groves, as resident of Pass Christian, Mississippi, 80 kilometers east of New Orleans, in an interview with Bellona web.

“Local media are not carrying much news about it, but official types who won’t let us on to the beach, say they are awaiting oil clean up,” she said via Skype. Groves, a Gulf-based photographer, participated in Bellona’s coverage of the Deepwater Horizon disaster.

The second coming of Macondo oil has also been observed on East and West Ship Island’s off Mississippi’s coast, about 20 kilometers north of Gulfport, Jonathan Henderson of the nonprofit Gulf Restoration Network said.

“What we saw was disgusting,” he said, recounting heavy deposits of tar balls that washed in from offshore. He also reported that he saw oil below wind- and wave-battered sand.

Mississippi environmental officials and marine laboratories have not responded to questions about whether they have done tests on their oil to confirm its origins in Macondo.

But the Mississippi Beach Monitoring website confirmed Groves’ reports that beaches as far east as Long Beach, Mississippi, about 90 kilometers east of New Orleans, have remained closed since August 31, four days after the storm that brought Macondo oil to the surface.

“The fact that the beaches remain closed begs the question as to how much longer this disaster will continue,” said Karl Kristiansen, Bellona’s advisor on industrial waste.

“Directly after the disaster, there were enormous efforts to clean up beaches – now it will not be so easy to marshal those efforts,” he said. “These beaches will not clean themselves.”

BP has contended that the amount of debris that washed up along the Mississippi coastline has hindered its oil clean up efforts there.

Mississippi, unlike Louisiana and Alabama does not allow oil drilling in its state coastal waters – a talking point that was instrumental to the state government’s campaign in the midst of the 2010 disaster to repeatedly deny that Mississippi was in danger of getting hit by oil.

Yet, former Governor Haley Barbour –who rose to office on millions in oil contributions – constantly locked horns with his state legislature to open Mississippi waters to offshore oil platforms until 2005’s Hurricane Katrina scuttled those efforts. His second term in office ended earlier this year.

In the midst of the Deepwater Horizon crisis, Barbour spearheaded efforts to downplay the dangers that Mississippi would be hit by the encroaching slick, saying in televised remarks observed by Bellona at the time that, “we haven’t had enough oil hit Mississippi’s beaches to fill up a milk jug.” In another instance, Barbour incredulously declared, “some in the news media keep forcing this on the public as the equivalent of Exxon Valdez. Well, the difference is just enormous.”

Barbour, however, was happy to declare a state of emergency, and the federal cash infusions that implied. Requests for comment about current oil clean up efforts to the office of new Mississippi Governor Phil Bryant have gone unanswered.

Bryant campaigned on opening the state’s offshore oil and gas reserves for exploration and drilling. He also signed, as part of the Outer Continental Shelf Governors Coalition, an August letter to President Barack Obama urging him to expedite offshore oil and gas development.

That beaches are still closed in Mississippi “could be taken as a sign of a lack of financing and that BP is trying to escape spending money on clean up,” said Bellona’s Kristiansen. “The fact that we now know that this is Macondo oil makes it unquestionable that this is BP’s responsibility to clean it up.”

While BP settled a nearly $8 billion payout to 130,000 private plaintiffs who were affected by the spill in a Federal Court in March, it remains unclear whether ongoing litigation between the US Justice Department and BP – which could be worth billions of dollars to states still trying to recover – will take into account new clean up efforts that will have to be mounted in Isaac’s wake.

BP spokesman Ray Melick said last month after the discovery of the new oil washing up that, “If there’s something good about this storm, it made it visible where we can clean it up.”

US experts expected that Hurricane Isaac’s waves would stir up oil buried under sand along the Gulf Coast.

Bellona’s Hauge emphasized that the ongoing environmental problems stemming from the Deepwater Horizon spill are difficult to gauge.

“These recent incidents of oil wash ups show very clearly that the oil industry’s claims that environmental problems after the Deepwater Horizon accident were resolved and no longer posed a danger were unfounded,” he said.

Central to these ongoing dangers, said Bellona advisor Keith Whiriskey, is that it remains unknown how much oil remains buried beneath foreshore sands just off Gulf Coast beaches, which could possibly be released by future storms.

LSU’s Overton agreed, saying more oil was likely buried in other places along the Gulf coast, perhaps as deep as a meter, and added that the difficulty for cleanup crews has been finding and removing buried oil.

Relatively pristine tar balls have washed ashore with each tropical system that has hit the Alabama coast since the spill, Auburn University’s Hayworth said, indicating the material isn’t going anywhere.

Kristiansen said that the worst of the damage from the oil remains buried in such sub-sand deposits would likely be subsurface ecosystems.

“The damage that we don’t see could be far worse,” he said. “The subsurface ecosystem damage can damage the genetic make up of and productivity of these ecosystems.”

He said that the chemicals released by the initial spill accumulate upward in the food chain, and “reach levels above the threshold of what causes genetic damage in marine species, and may further cause cancer in seafood consuming humans.”

“If anyone is still accepting BPs assertions that this is not an environmental disaster any longer, this is an eye opener,” he added.