The launch this year of drilling at Russian State gas monopoly Gazprom’s Prirazlomnoye field in the Pechora Sea off Russia’s northwest coast – one of the gas giant’s signature projects – has been put off until autumn of 2013, Russia media have reported.

Published on September 24, 2012 by Charles Digges

The announcement could signal a second blow to Gazprom’s Arctic hydrocarbon recovery ambitions, following closely on the

Bellona advisor Larisa Bronder said such heavy-duty recent delays are a clear indication that Russia’s oil and gas industry are not nearly prepared to begin drilling in Arctic conditions.

Gazprom says it will now not begin work on drilling the massive Arctic Prirazlomnoye field – which is estimated to contain reserves of some 72 million tons, or 97 million cubic metres, of oil – until it is certain its work will be safe, a source close to the project told Reuters, as quoted by the online Russian newspaper Gazeta.ru

Gazprom expects that it will be able to recover some 6.6 million tons a year once production begins, and has invested some $4 billion in the Prirazlomnoye project, the Murmansk-based murman.ru news site reported.

“We are expecting the delivery of platforms in March and the beginning of drilling in April. The beginning of [oil] recovery will happen in September or October of 2013 – there is absolutely no hurry,” the source, who declined to be named, was quoted by Gazeta.ru as saying.

The source did not specify any reasons beyond those of safety for the delay of the single significant Russian oil recovery project scheduled by Russia this year, and did not identify any specific safety concerns that Gazprom itself thinks needs to be addressed.

“No work will begin until the company is completely convinced that its work will be entirely safe,” said the source.

Neither Gazprom itself or its daughter company, Gazprom Oil Shelf, which oversees the day-to-day work in the Prirazlomnoye field were available for immediate comment on the delay.

An inspection of the Prirazlomnoye project conducted over the summer by the Russian Federal Service for Technical, Nuclear and Environmental Oversight (Rostekhnadzor) cited eight violations that prevented the beginning of drilling, murman.ru reported.

Bellona’s advisor Larisa Bronder said the delay in drilling Prirazlomnoye showed just how unprepared the Gazprom was to work in the harsh, yet environmentally fragile condition of the arctic.

“This negative dynamic in the development of Gazprom’s project to develop of the Prirazlomnaya field again underscores the unpreparedness of the Russian gas and oil complex for developing shelf (arctic) fields,” she said.

“This unpreparedness is reflected not only in the absence of contemporary technological decisions […] and an actual plan to deal with cleaning up oil spills, but of insufficient financing as well,” added Bronder.

She also pointed out the construction of the much-touted Prirazlomnoye platform – advertised as the world’s first Arctic-class ice-resistant oil platform – took a stutter-step 15 years.

Gazprom’s plans at Prirazlomnoye have attracted a hailstorm of high-profile environmental criticism, and some Russian press outlets have speculated that this negative attention may have forced Gazprom to put the breaks on hasty development.

Late last month six international activists from Greenpeace managed to evade security and board the Prirazlomnoye platform. The activists spent some 15 hours dangling from the platform. 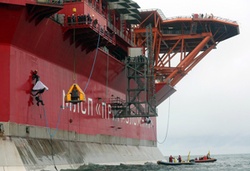 Gazprom Oil Shelf at the time told Murman.ru that Prirazlomnoye platform workers had invited the activists on board for “constructive dialogue,” but that the activists refused, saying they preferred to “hang on the platform.”

For their part, activists say they were pelted by high-pressure hoses turned on them by platform workers, soaking them in freezing temperatures. After their nearly day long occupation, the activists returned to the Arctic Sunrise vessel on which they had arrived.

Other majors postponing off Artic drilling

The delay in Prirazlomnaya drilling was in line with similar decisions taken by other oil companies attempting to break into the Arctic market, namely Royal Dutch Shell.

Shell announced last week that a large containment dome that it will put in place to protect against oil spills during its drilling activities in the Chukchi and Beaufort seas off Alaska will be delayed by at least a year because the containment dome was found to be damaged during testing in Washington state last Satuday, the Associate Press Post reported.

Shell says it has been dogged by regulatory issues in the wake of the BP Deepwater Horizon explosion and blowout in 2010 in its quest to drill hydrocarbon bearing rock north of Alaska.

Since July, the Prirazlomnoye field, located some 60 kilometers from the shore in the southeast portion of the Barents Sea on the continental shelf, has been included in the list of fields slated to receive breaks on tariffs for exported oil.