French Total oil’s Chief Executive Christophe de Margerie said drilling in the Arctic may be too risky to the environment in what may be the first time a major oil company has publicly raised doubts about offshore oil exploration in the region, according to a report by the Financial Times on Wednesday.

Published on September 27, 2012 by Charles Digges 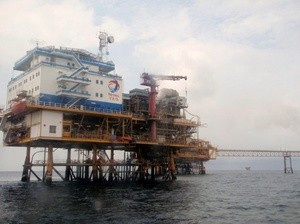 De Margerie told the newspaper the chances of an oil spill are too high.

“Oil on Greenland would be a disaster,” he said in the interview. “A leak would do too much damage to the image of the company.”

Bellona President Frederic Hauge said that he is “very happy with Total’s clear stance on this issue” and that, “I am proud to work with them.”

“Total is far more open with information, even in crisis situations,” said Hauge. “It is enough for both economy and environment to be  behind such a statement and a decision.”

“There are many places in the world we can drill, and the Arctic is not a place we want to be,” de Vives was quoted by Aftenbladet newspaper as saying. “Therefore, we are not on drilling off Greenland, for example.”

The stance puts de Margerie at environmental odds with his competitors who are busy carving out oil exploration programs in the Arctic area. Royal Dutch Shell , ExxonMobil and Norway’s Statoil have all recently signed deals to explore far north deposits.

BP is trying to develop its exposure to the area through its Russian partnerships, and Statoil in May signed on for a joint project to explore oil deposits in the Barents Sea with Russian state oil monopoly Rosneft.

Statoil has recently announced plans to drill nine exploration wells in the Arctic by next year, according to the E42 Norwegian-language news agency.

Royal Dutch Shell’s plans for drilling this year in the Chukchi Sea off far northeast Russia and Alaska were last week hobbled when the company announced that a containment dome it would use in the project had been damaged during tests.

Gazprom itself has also backed off drilling the Prirazlomnoye oil field in the Pechora Sea this fall – also citing safety concerns due to harsh arctic conditions, according to a source cited by Reuters.

“No work will begin until the company is completely convinced that its work will be entirely safe,” said the source.

Bellona advisor Larisa Bronder said such a spate of recent heavy-duty delays are a clear indication that the oil and gas industry are not nearly prepared to begin drilling in Arctic conditions.

“This negative dynamic in the development of Gazprom’s project to develop of the Prirazlomnaya field again underscores the unpreparedness of the Russian gas and oil complex for developing shelf (arctic) fields,” she said. “This unpreparedness is reflected not only in the absence of contemporary technological decisions […] and an actual plan to deal with cleaning up oil spills, but of insufficient financing as well.”

Gazprom’s plans at Prirazlomnoye have attracted a hailstorm of high-profile environmental criticism, and some Russian press outlets have speculated that this negative attention may have forced Gazprom to put the breaks on hasty development.

Late last month six international activists from Greenpeace managed to evade security and board the Prirazlomnoye platform. The activists spent some 15 hours dangling from the platform.

At the time, Gazprom told Murman.ru that Prirazlomnoye platform workers had invited the activists on board for “constructive dialogue,” but that the activists refused, saying they preferred to “hang on the platform.”

For their part, activists say they were pelted by high-pressure hoses turned on them by platform workers, soaking them in freezing temperatures. After their nearly day long occupation, the activists returned to the Arctic Sunrise vessel on which they had arrived.

De Margerie emphasized in the interview that Total would not be shelving plans to continue work with Shtokman Development AG and Russia’s natural gas monopoly Gazprom to tap the enormous gas reserves under the Barents Sea.

Though Gazprom announced at last month’s ONS conference that it was indefinitely mothballing the Shtokman project due to cost overruns, de Margerie, like Statoil, expressed interest in further work with Gazprom to make the Shotkman project profitable.

Environmental skepticism that has dogged the Shtokman gas condensate drilling project. But de Margerie told the Financial Times that accidental oil spills are far easier to bring to heel than oil spills.

Hauge praised Total’s receptiveness to Bellona’s input on its participation in the Shtokman project. “The are open to discussing our ideas on Shtokman,” he said.

De Marerie’s comments are likely to infuriate his rivals, who will point to the fact Total does not have any major oil development programs in the Arctic to lose.

Though Statoil would not comment directly on Total’s stance, and did not immediately return text messages from Bellona, the company’s communications manager , Ola Anders Skauby, emphazised in a statement to E24 that Statoil is well prepared for Arctic drilling.

“Statoil has built on 40 years of experience in harsh weather conditions on the Norwegian continental shelf and secured a strong portfolio across the Arctic,” Skauby wrote in the statement. “We now have licenses in the Arctic waters of the United States, Canada, Greenland, Norway and Russia. A stepwise approach allows us to learn from each experience and further develop our expertise.”

Some one quarter of the world’s undisovered oil resources are believed to lie in the Arctic.

Russia is said to control close to 50 percent of these undiscovered reserves, according to studies by the United States Geographical Survey, which also indicated there are significant reserves off the east coast of Greenland.