France’s Total Oil, which is a major shareholder in the development of the Shtokman gas condensate field off the northern coast of Russia in the Barents Sea, has strongly indicated it has environmental reservations about perusing Arctic-based oil projects. 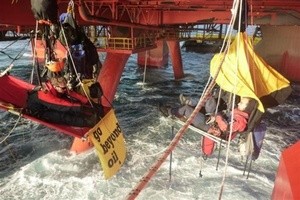 “We are concerned about the consequences of an oil spill in these areas. Accidents can always happen, even with the best technology,” Patrice de Vives, Total’s Vice President of Northern European operations told the Norwegian daily Aftenbladet at the ONS Oil and Gas conference currently taking place in Stavanger, Norway.

“There are many places in the world we can drill, and the Arctic is not a place we want to be,” he was quoted by the paper as saying. “Therefore, we are not on drilling off Greenland, for example.”

Arctic drilling has emerged as a contentious topic at the ONS conference, according to Norwegian media reports.

Total’s corporate offices in Paris have yet to respond to emailed and telephoned requests from Bellona inquiring as to whether de Vives’s announcement means Total will be abandoning its role in developing the enorous and environmentally controversial Shtokman field, which is said to hold more than 30 trillion cubic meters of gas condensate.

Moscow has been banking on this project for years, but it has yet to develop beyond constantly revised blueprints.

Earlier this summer, disputes erupted among the Shtokman partners over tax subsidies they would receive. Several meetings of the company’s board done little but further postpone discussion of the issue.

Bellona President Frederic Hauge, who is attending the ONS conference, was encouraged by de Vives’s remarks.

“Total shows that there are oil companies willing to discuss complicated operations in vulnerable areas in the Arctic.,” Hauge said.

“Personally, my experience with Total shows it is a company willing to share information and listen to advice from experts on Arctic matters. Their signals are very positive,” he said.

Shtokman Development AG, the company leading the project – which is comprised of Russian gas giant Gazprom, Norway’s Statoil and Shell – will tomorrow, on Augst 30,  be holding a meeting of its board to determine the final compositon of the foreign sharholders invovled.

Norway’s Statoil early last month gave back to Gazprom its 24 percent holding in the Shtokman project as part of an agreement that it would do so when the agreement on its participation in the project expired. All agreements with foreign partners, including Total, expired at the end of June.

Despite its stance at the ONS meeting yesterday, Total has not yet returned its 25 percent stake in Shtokman to Gazprom.

While Statoil spokesman Bård Pedersen has told Bellona the Norwegian state oil company is “still negotiating with Gazprom to find a way forward to profitably develop the Shtokman phase 1 project,” the news of the share handover was greeted warmly by the Norwegian public, which has environmental concerns about the drilling endeavor.

Statoil to let Shtokman down easy?

Some experts at Bellona have speculated that Statoil share return gives it a way of gracefully exiting the environmentally contentious and uncertain Shtokman project.

Statoil in May signed on for another lucrative project with Russia’s state oil giant Rosneft to explore hundreds of thousands of square kilometers in the Barents Sea – a deal that would allow the Norwegian company to maintain interests in oil-rich Russia.

The environmental ramifications of doing business with Rosneft, however, are also questionable.

Earlier this summer, a source familiar with the Shtokman project told Reuters that a new investment plan would be in place by December, though he did not specify who the foreign players would be.

While the Dutch have stumped at ONS for greater international regulation of offshore drilling, they did not address their own position on drilling in the Arctic.

Maxime Verhagen, deputy prime minister of the Netherlands, told the Aftenbladet that, “As government representatives can not delegate responsibility for safety and security for the oil companies.”

“We must take care of this. Therefore, we need international rules for drilling in the Arctic,” he added.