A number of accidents and incidents have shown that hazardous waste from the oil industry is not handled with the care it is due, argues Bellona’s Karl Kristensen as the ONS oil and gas conference kicks off today in Norway’s city of Stavanger.

Published on August 27, 2012 by Karl Kristensen, translated by Charles Digges 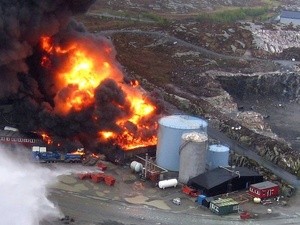 The importance of developing serious procedures for handling hazardous waste from oil industry was apparent to all when a storage tank explosion in Sløvåg in Gulen released waste into the atmosphere in summer 2007.

In the aftermath, the oil industry, instead of cleaning up, contributed to the growing number of similar cases that have followed in its wake. In 2010 waste leaks were revealed on a variety of injection wells on the Norwegian continental shelf, which resulted in police reviews of conditions at Statoil’s Veslefrikk. In June the following year, a serious environmental crime was revealed at the Oleon plant in Sandefjord, where illegal storage of large quantities of waste was taking place.Then, in August, there was another explosion – this time in a storage tank on board the Mar Cristina cargo ship. The ship was carrying out an assignment for the DVS Norway waste company, which itself is responsible for a number of irregularities and accidents. Statoil’s illegal dumping of chemical waste in the production pipeline at the Sture terminal also bears mention.

Such events cannot continue. The oil industry does not necessarily deliver waste that is very much more toxic or dangerous than other industries, but because the waste is delivered in large quantities in a short time, it creates a particular risk. Until now, the oil industry has rejected the demand that it shoulder a wider responsibility for this hazardous waste –despite pressure from the government and society at large. The Norwegian Oil Industry Association (OLF) stated in  Teknisk Ukeblad’s  October  10, 2011 issue that it considers such requirements to be very special, unnatural, and infeasible.

It took time to get Norway’s Climate and Pollution Agency (Klif) on board, but once the agency got a serious wake up call about the risks these incidents represent, it took a number of important steps. The industry has been followed more closely, and the worst crimes have been prosecuted. In addition, Klif requested that the Norwegiain Oil Industry Association (OLF) prepare a report providing that would, among other things, present an overview of the flow of hazardous waste from the oil industry, and point out ways the waste can and should be handled. The report was submitted to Klif on  June 8. It contains a surprising amount of serious deficiencies that enhance Bellona impression that the oil industry’s main strategy in this area to date has been to sweep problems under the rug. The report fails to answer several key questions posed by Klif and provides estimate on how future waste generation and treatment will be handled in an obviously misleading way. That the OLF – based on this very report ­– has stated that the waste crisis has now blown over creates the impression of an industry that chooses to ignore reality.

On this basis, Bellona has sent a letter to Klif where we recommend that the OLF report be returned, along with a requirement that it conduct a new investigation. The Norwegian Association for Hazardous Waste (or Norsk Forening for Farlig Avfall (NFFA) has also been involved in this case, and notes on its website many of the same deficiencies Bellona has identified.

The Norwegian oil industry has more resources at its disposal than any other sector. This provides a unique opportunity to not only lead by example, but to also be a driving force for positive developments in the value chain of the industry as part of that example. The systems of control over and replacement of hazardous chemicals on the Norwegian Continental Shelf is now far better than just a few years ago. This is largely due to the oil industry’s own efforts, although both the government and other stakeholders have also contributed and been a driving force.

Bellona now asserts that the time is ripe for the the oil industry to address the challenges of oily waste the same way. The Norwegian oil industry has the necessary resources and framework to ensure that the handling of its own hazardous waste is based on the best available technologies and practices, and the need to contract these tasks to the lowest bidder, who will cut corners, no longer exists. There is  further potential for deals that also facilitate the wider development of these solutions. We have seen in this in the historical development of the Norwegian supply industry.

To find the best solutions, the Norwegian oil industry needs a mappping of the challenges which is significantly better than the one presented in the OLF report. The industry also needs a far more aggressive approach to how opportunities for improvement can be grasped. Instead of brushing challenges under the rug, it should focus on the solutions that the industry itself envisions for itself. Are there approaches that can contribute not only to necessary destruction of waste, but also to improved recovery resources in that waste? Could an agreement on extended producer responsibility for oily waste based on th the same model developed for other industries be appropriate?

Should there be a greater requirement for sorting and/or other pre-treatments of waste before it is delivered? This and other relevant issues must be the oil industry’s  fellow travellers, and as such, bring it into meaningful debate. The gauntlet has been cast.  We hope the oil industry will pick it up.

This feature also appeared in Stavanger Aftenblad on August, 27 2012.