Some 2,000 tons of oil have spilled over the weekend at a crucial drilling field in Russia’s northern the Nenets Autonomous District after a two-day struggle to contain the leak causes by a combination of technical and human error, Russian and Western media outlets have reported. 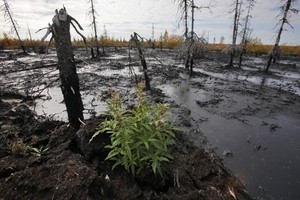 The accident happened at the Trebs oil field, jointly developed by OAO Bashneft and OAO Lukoil, in the Nenets Autonomous District on Friday following work on an exploratory well, according to RIA Novosti.

The accident occured around 5:30 p.m. on April 20 and caused an uncontrolled oil blowout that rescue workers contained by around 6 a.m. Sunday, the Russian news service wrote, citing an Emergency Ministry official it did not identify.

Bellona President Frederic Hauge said that the spill “was not terribly major” and “that it was good that it was reported, as many that happen in this region are not.”

He did reemphasize, however, that money Russia is spending on new oil and gas field development projects should be put into overhauling Russia’s decrepit and leak prone oil and gas infrastructure.

Bezumov told AP it was too early to speak of the causes of the accident, but he said it was likely a combination of technical issues and human error.

The Trebs oil fields are developed by OAO Bashneft Plus, a joint venture between Bashneft and Lukoil, and hold about 153 million tons of oil, according to RIA Novosti.

Russian environmental officials will be preparing a lawsuit against the oil companies after the clean-up is over, Bezumov told the AP.

The area around the oil field is largely unpopulated but the oil spill has damaged pastures used by local reindeer herdsmen, said the agency.

An AP investigation last year showed that at least 1 percent of Russia’s annual oil production, or 5 million tons, is spilled into the environment every year.