BP will pay an estimated $7.8 billion to settle a lawsuit over the massive 2010 Gulf of Mexico oil spill with attorneys representing some 130,000 individual plaintiffs and businesses on the eve of a major trial in a New Orleans federal court, the company said Friday night.

Published on March 3, 2012 by Charles Digges 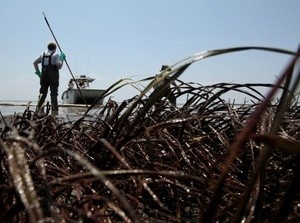 BP said it expects to pay the settlement from the money remaining in a $20 billion escrow account, or trust fund, it set up during the spill to resolve individual and business claims without going to court.

The two lawyers who led the plaintiffs’ steering committee, Stephen Herman and James Roy said in a statement that, “This settlement will provide a full measure of compensation to hundreds of thousands — in a transparent and expeditious manner under rigorous judicial oversight.”

The agreement reached last night does not include the biggest plaintiff in the BP case: the federal government. Nor does it include the state and local governments along the coast, which are also suing.

Bellona President Frederic Hauge said Saturday morning that the plaintiff’s response was understandable in conditions where oil companies have the financial resources to drag individual settlements out for decades.

“Twenty years in court is no road to paradise,” he said.

He did not clarify whether the $7.8 billion estimate represents the upper limit of what the London-based oil giant will pay.

Judge Carl Barbier of Federal District Court in New Orleans issued an order late Friday night, given to reporters by court officials, stating that the two sides “have reached an agreement on the terms of a proposed class settlement which will be submitted to the court,” and announcing that the first phase of the trial, scheduled to begin on Monday, is adjourned indefinitely while the next steps are worked out.

The deal between the plaintiffs and BP is subject to approval by Judge Barbier as other parties – such as Transocean, the owner of the Deepwater Horizon rig, and Halliburton – reassess their strategies in the case, US media reports siad.

“The settlement is to be fully funded by BP, with no cap on the amount BP will pay,” the Plaintiffs Steering Committee said in a statement.

Hauge, who hadhoped the case would go to trial so light would be shed on BP’s irresponsible actions, softened his position regarding the plight of individual plaintiffs.

“I get same bad oil smell in my mind as I did from the site of the spill – a bad oily smell,” said Hauge, who was present for the Deepwater Horizon blowout in April, 2010.

“But it is hard to criticize the plaintiffs because they understand it will take years to reach settlements,” said Hauge, adding that BP was taking a page from Exxon’s playbook in its handling of the Exxon Valdez spill of 1989.

Twenty-three years on, individual lawsuits against the oil giant are still dragging through courts as injury and illness cases drop away as plaintiffs die off.

“In a way it is not for us to decide what it an acceptable sum is – we have seen what is happening in the Exxon Valdez spill,” said Hague. “BP holds the cards, and that is not a way to start talks on environmental damages.

Hauge said that the strike against BP should now be aimed at the outstanding claims still not settled with the federal government and governments of Gulf of Mexico states that are also suing BP and its partners on the Macondo well.

“It is more important now than ever that the government go for criminal charges,” he said.

Spill-related civil fines remain to be decided under the Clean Water Act and Oil Pollution Act of 1990. Justice Department officials have said the government will not decide whether to file criminal charges for at least a couple of months, the Washington Post reported.

The spill, which poured as much as 4.9 million barrels of oil into the gulf, was triggered by a blowout at BP’s Macondo well on April 20, 2010, killing 11 and sinking the Deepwater Horizon oil rig. It was the worst oil spill in US history.

BP has been eager to settle claims quickly, in part to move beyond the incident and in part to avoid a potentially embarrassing trial that would rehash events or uncover potentially damaging information about the blowout’s causes. The company says it has already paid more than $8.1 billion to individuals, businesses and government entities. In addition, it has spent about $14 billion cleaning up the spill.