An unscheduled inspection carried out late last year by the Russian federal environmental watchdog, Rosprirodnadzor, at the Belomorskaya oil bulk plant on the shore of the White Sea in Russia’s north revealed the enterprise had still not removed the cause of the ecological disaster it had been responsible for last May – an oil spill that severely polluted over 600,000 square meters of the shoreline and basin of Kandalaksha Bay.

Published on January 28, 2012 by Alexey Pavlov, translated by Maria Kaminskaya 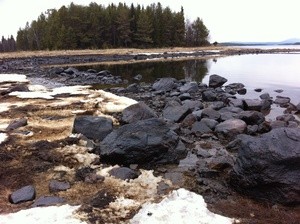 Before cleanup measures were deployed in Kandalaksha Bay in Russia’s far northern Kola Peninsula, some 400,000 square meters of the coast and 200,000 square meters of the bay’s basin area had been polluted with oil products as a result of the May 7, 2011 accident – including a range of islands that are part of a local nature reserve. The oil slick spreading from Belomorskaya (or White Sea) oil bulk plant, a coastal facility in the town of Kandalaksha in Murmansk Region, was threatening hundreds of protected wild species inhabiting the Kandalaksha National Park, only a kilometer and a half away.

Speaking to Bellona shortly after the accident, Belomorskaya director Sergei Khmelyov said ground waters with decades-old oil products mixed in had come out onto the surface, elevated by a springtime flood that had inundated the area. He attributed the leak to a Soviet practice of allowing oil spills from loading racks to simply seep into the ground and get absorbed by the soil and ground waters. According to Khmelyov’s statements last May, the loading racks at Belomorskaya had undergone complete renovation since 1995, and “no leaks [could] possibly happen [there] from the equipment or the pipelines.”
However, sources at the company told Bellona at the time that oil leaks happened regularly at the bulk plant – though they had never seen a spill as large as this most recent one – and oil pollution in the area adjacent to the storage depot was thought by Nina Lesikhina, an expert with Bellona-Murmansk, to be of a chronic nature, possibly “due to an inefficient effluent water purification system at the plant, leaky storage tanks, or the accumulation of oil products in the soil over the many years, which then start[ed] seeping out onto the surface, pushed by flood waters.”
The spill was being investigated by regional officials with the department for marine environmental safety supervision of Rosprirodnadzor, which is the Russian acronym for the Russian Federal Service for the Oversight of Natural Resources.

After the initial cleanup operations were completed, the plant was instructed to implement a series of measures to remove the cause of the leak and make sure any possible spills were effectively prevented in the future.

Belomorskaya, however, seems to defer fully eliminating the remaining risks until at least a few years ahead.
Rosprirodnadzor’s marine environmental safety officials paid a visit to Belomorskaya last November to take soil and water samples and check on the progress of spill prevention measures the bulk plant had been instructed to carry out. The samples were shipped off to a lab for analysis, and the results only became available after the new year.
The inspection revealed that the cause of the oil spill last May had still not been fully eliminated. The heavy mix of subsoil water and oil spillage that had broken out into the sea with flood water last spring had been collecting underground throughout many years of operation of one of the loading racks that was not equipped with facilities protecting the soil underneath from leaking oil products. Furthermore, Belomorskaya has still not succeeded in localizing and containing the leakage precisely where it has collected – even though geologists’ help has been enlisted to find the spot.

A company called Eco Service was engaged in the cleanup efforts after the spill last May and continues to monitor the situation. Eco Service’s head Alexander Glazov said Belomorskaya kept drilling wells throughout the year, but still has been unable to find the location of the leak – but, “God willing, one of the wells may finally produce a concrete result” and the main spot where oil products have collected will be found.

“Then, one will be able to start pumping [oil] out at that spot – drill a well or dig a pit. I’d suggest a well, it’s easier, plus the more we pump out, the less [oil] ends up in the water,” Glazov said. “But anyway, this process must be kept under control, and come spring, we need to watch closely how the snow is melting there, if the oil products are being pushed from underground. In other words, monitoring, monitoring, and monitoring.”

With the precise location of the underground pool of collected spillage still unknown, the risk remains that the oil is still leaking out. After the accident last May, oil booms were installed to contain the spread of the leak, and special algae and bacteria capable of cleaning up the toxic pollutants found in oil products were planted in the area in August. These helped decontaminate the area until cold weather came and ice started forming on surfaces. The plantation was then removed before it was froze over. The oil booms were removed as well. Unless cold temperatures keep well into the spring, no barriers will be left in the area to prevent oil products leaking out again into sea.

To use the algae technology to clean up the May spill – a method that has already demonstrated promising results – Belomorskaya went into contract with a company called Plantatsiya (Plantation), but it is yet to renew the contract to repeat the operation next spring. Plantatsiya is the only firm in Murmansk Region that can provide such a technology to help with the ecological remediation of areas affected by oil spills.

“That the algae are effective can only be shown by the results of sample analysis. [That’s] because the algae work with that invisible content of oil that is present in the water, or it absorbs the layer of the slick that rescue teams cannot pick up and remove using mechanical means,” Plantatsiya’s director Vladimir Bakharev told Bellona.

Asked whether Plantatsiya will continue working with Belomorskaya, Bakharev said the firm had a preliminary agreement with the bulk plant to replant the area with algae next spring.

“But it will all depend on their willingness and on the [availability of] financing. The principal thing is that we are raising the issue of protecting the Kandalaksha National Park. Because the island reserve of Olenii is just 1,500 meters off the leak spot, and the park’s watershed is 700 meters away. Our task is to protect them.”

That oil pollution happens yearly in the area exactly during spring makes the task at hand all the more challenging: Springtime is the season when birds set up nests, and their populations become even more vulnerable to the toxic effects of an oil spill during this period. A repeat spill of the scope that happened last May could mean tragic consequences for the ecosystems of the White Sea.

It would be wrong to claim that Belomorskaya has been sitting on its hands, allowing the ecological risks to fester until it is too late – the bulk plant spent over RUR 10 million (around $325,000) on cleanup efforts. Eco Service’s professionals were hired, special equipment rented, and chemicals bought for these purposes. Drilling specialists were also engaged to try and find the location of the leakage. Their services come at a cost, just like those rendered by Plantatsiya.

However, the November inspection by environmental authorities showed Belomorskaya had failed to comply with two of the five on the list of instructions it had received from Rosprirodnadzor following last year’s spill. It had also failed to carry out ecological remediation of the polluted soil.

The bulk plant is not refusing to follow the orders, but it apparently does not expect to be fully compliant with Rosprirodnadzor’s regulations within less than five years’ time: This is exactly the time frame specified in the enterprise’s own spill cleanup plan. Apart from the protracted implementation period, experts also believe the plan is quite costly. A magistrate court is currently deciding on the amount that Belomorskaya is to be fined for failing to carry out Rosprirodnadzor’s instructions. But fines for violations of the environmental legislation are deplorably low in Russia, and hardly exceed just a few dozen thousand roubles. That is rarely more than chump change for an enterprise of Belomorskaya’s size, which has already paid a fine of RUR 40,000.

Last May, a number of ecological organizations in Murmansk Region signed an open letter urging Belomorskaya to be more open in its information policies. The statement also called on local parliamentaries to initiate adopting a federal law that would provide for more rigorous protection of Russia’s seas from oil pollution.

“We found out about the oil products leaking into the water of Kandalaksha Bay from local residents, while the company responsible for the leak was keeping silent,” Bellona-Murmansk’s Nina Lesikhina said. “We’ve contacted [Belomorskaya’s director Khmelyov] suggesting a meeting to discuss the results of the oil spill cleanup measures and a visit to the place of the accident, but the company still keeps silent. Because the cause of the accident has still not been removed, it is likely to recur this spring, which means that again, red-listed species of marine birds will be under threat!”

The risks of a repeat spill are compounded by the severe weather conditions prevalent in the far northern latitudes where the Kola Peninsula lies. This factor both contributes to the danger of oil spill accidents in general – such as during shipping – and hinder timely and efficient first-response measures if or when a spill has already occurred. Such operations are unlikely to ever become absolutely safe, and experts believe it to be imperative to arrange a reliable and well-organized system of oil spill prevention and cleanup measures so that these resources could, if necessary, be deployed efficiently and on time.

Such a system must include satellite monitoring of polluted areas, a lab to carry out oil spill modeling, and an expansive network of specialized first-response services spread along the entire coastline of Kola Bay – services that would be supplied with all the necessary equipment and personnel.

As experts point out, however, none of these will serve their purpose if the government’s environmental policies and Russian legislation fail to effectively protect the country’s water resources from oil pollution risks – a deficiency that is in urgent need of remedy. Until better safeguards are in place, experts and environmentalists say, the government would be best advised to introduce a moratorium on further oil and gas exploration in the Russian Arctic.