Nine environmental organizations across Europe have written an appeal to European Commissioner for Energy Günther Oettinger urging that he not let weak offshore oil drilling regulations stand and instead prioritize environmental protection and the safety of offshore workers in his proposal for regulations to be put forth this month. 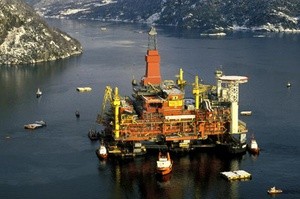 Further to the individual submissions provided to the European Commission in response to the public consultation on improving offshore safety by the groups responsible for this letter, we are writing to plead for a truly responsible approach to dealing with offshore drilling in Europe in advance of your Proposal this September.

Lessons must be learnt

What is clear from recent investigations1 into drilling practices both within Europe and the US is that national authorities are failing to adequately regulate offshore drilling operators. Safety claims made by the industry are being overly relied upon, and operators are failing to take effective safety measures. Regulation at EU levels is seriously lacking and several gaps exist within the authorization processes, which often lack consistency when it comes to technical evaluation or environmental impacts assessments.

If reports on drilling practices have not made these points crystal clear, it is also a shocking reflection of a national administrative approach that North Sea oil rigs operating in UK waters have suffered major or significant leaks at a rate of almost one every week throughout 2009 and 2010. Another appalling fact reported by the UK government’s Health and Safety Executive is that more than 96% of installations in the North Sea were found to require improvements during inspections over the past three years, with one in five showing “major failings”. Similarly in a recent audit of maintenance on Statoil`s platforms, the Norwegian safety authority (PSA) identified deficient compliance with regulatory requirements relating to maintenance management. Among others things, the PSA pointed out that Statoil was 500.000 hours behind scheduled maintenance work at the four platforms. Also in 2007 the PSA urged the industry to take action after audits of several players in the petroleum industry revealed extensive failure in maintenance management. These findings are perhaps surprising when many stakeholders have given such positive assurances over the UK and Norwegian’s “safety case approach”.

Current national regulatory regimes both in Europe and globally have failed and timely reminders are presented by the recent Shell leak in the North Sea and the oil spill at an installation in China’s Bohai Sea. A new way is urgently needed and two key measures must be taken at the European level:

(1) The need for an EU wide regulator

Oil that has been spilled from an installation has no respect for national borders, nor fragile marine ecosystems and nor does it respect the numerous marine resources that citizens rely upon. Having high common EU standards on offshore drilling activities and a body responsible for ensuring those standards are met is undoubtedly in the interest of all Member States, and not just those who have jurisdiction over certain sea basins. It is crucial therefore that an appropriate response across Europe is taken in order to raise standards and to ensure that national regulators and operators are abiding by those standards.

We believe that a European wide regulator would bring added value and numerous benefits to national regulators, operators and EU taxpayers. Not only would such an approach provide an independent pair of eyes to check that legislation is being implemented properly but also that safety claims made by the industry are fair and that reporting of safety/environmental breaches becomes more transparent. Having an EU wide regulator would also ensure that offshore authorization processes, safety standards and best environmental practices are homogenized and mainstreamed throughout EU regions and thus resolve the current unbalance that exists. This is particularly important regarding basins that are less well developed and where offshore exploration is now developing fast (i.e. Mediterranean, Black Sea).

European supervision should not be considered as a drain on national resources but a supplement to those resources, as it would ultimately reduce the potential risks of oil spills and the associated costs for European citizens (clean-up, remedy and compensation claims). It is a necessary cost for Europe as the emphasis on prevention is of utmost importance to develop a strong EU safety culture in offshore activities. Of course, such an expansion of EU services in this context should be rightly invested in and could be met by oil drilling operators contributing financially towards such a service.

This group of NGOs urges you to investigate in your Proposal the possibility for the EMSA (European Maritime and Safety Agency) to qualify for this EU supervision role, building on the long experience of the agency and relevant tools developed to deal with ship pollution and safety.

(2) The need for comprehensive liability coverage

Measures must be put in place that enshrine the ‘polluter pays principle’ and ensure that taxpayers are not made financially liable for industrial environmental damage. It is important to realise here that not all oil drilling operators are equally well endowed-financially, nor do all operators have public brands that require immediate protection in the case of a catastrophe. We call on your services to make sure that strict liability regimes are in place for any environmental damages; and propose that all offshore drilling operators, either individually or collectively, in all European waters and beyond are fully liable for any compensatory and clean-up work that results from an oil spill. If such financial capacity cannot be assured they should not be permitted to undertake drilling operations.

We would like to remind you that this is not an issue about ‘big oil’ or ‘little oil’, but about industry fully accounting for the environmental damage that could result from an inherently risky activity, and the role that liability coverage has in preventing negligence. Lessons here must be learnt from the Deepwater Horizon incident, where it is obvious that a liability cap of US$75 million was not an appropriate amount to incentivise the adequate investment needed to prevent an oil spill (considering that full costs of the incident are likely to be approach $50 billion). Predicting the effect of a major oil spill is almost impossible to do and thus capping financial liability at an appropriate level is difficult, if not impossible to do. We urge you to ensure that operators are made fully liable for any damages to the marine environment or human welfare and also to strengthen disincentive measures including larger fines, removal of licences and, if appropriate, bringing criminal cases against operators and individuals if wrongdoing has been demonstrated. Only these safety measures will ensure clear and complete liability rules necessary to bring back a required sense of responsibility by operators.

Offshore oil drilling is a risky business and the risks are growing, particularly concerning the move towards ever-deeper, more dangerous and more fragile environments such as the Arctic region – where existing petroleum industry standards are largely unsuitable and where response, rescue, and clean-up capabilities are virtually nonexistent. Putting in place weak regulation simply to allow the continuation of oil drilling on the grounds that it would otherwise be too financially prohibitive would be a disaster.

Alongside other key requests that we, the environmental NGOs have proposed in our individual responses to the recent consultation, we urge you to strictly respect the precautionary principle and prioritise the protection of the marine environment and the safety of workers on offshore installations in your proposal this September.

On behalf of the following organizations:

Client Earth; Justice for the Planet