After harsh criticism, Transocean execs say they will donate ‘safety’ bonuses to families of those killed on Deepwater Horizon

In the face of withering criticisms of huge “safety” bonuses granted to executives with Transocean international, the owner of the Deepwater Horizon rig, says it’s top five executives will donate their windfall to families of the workers who died in the explosion aboard the vessel last May, US media have reported.

Published on April 6, 2011 by Charles Digges 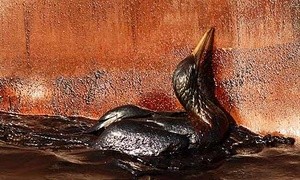 Transocean announced earlier this week that it was distributing huge bonuses to its top executives for making 2010 the “best year” in safety the company had experienced, notwithstanding the death of 11 workers aboard the Deepwater Horizon rig, nine of which were Transocean employees.

Bellona’s president Frederic Hauge said Monday he was “disgusted” by the bonus announcement.

“It is incredibly provocative that a company that is jointly responsible for such poor safety that 11 people die, chooses to give itself bonuses for good saftey that very same year,” said Hauge.

Mark Lanier, a Houston lawyer who is representing clients who have claims in the spill, said of the bonuses: “Some things are just gross.”

The five will donate more than $250,000 to the Deepwater Horizon Memorial Fund, which Transocean established, CNN reported, though it is unclear how much of each executive’s bonus that donation represents or if the $250,000 donation is collective or individual from each executive. US corporate executive bonuses in the financial and industrial sector rouitinely top a million dollars.

The fund has distributed more than $1.6 million to the 11 families of the perished workers.

In a statement Tuesday, CEO Newman said in a statement that, “The executive team made this decision because we believe it is the right thing to do. Nothing is more important to Transocean than our people, and it was never our intent to diminish the effect the Macondo  [Deepwate Horizon] tragedy has had on those who lost loved ones.”

“We offer our most sincere apologies and we regret the impact this matter has had on the entire Transocean family,” his statement read.

Transocean continues to maintain that that BP is solely responsible for the oil spill. BP contends that Transocean shares liability. A presidential commission determined that BP and Transocean shared responsibility for cutting costs an safety measures that led to the blowout.

The Deepwater Horizon blast – caused by an avoidable hydrogen “kick,” or gas emission up the drilling column –  unleashed an oil gusher in the Gulf of Mexico that BP, who was leasing the Deepwater Horizon rig from Transocean, took three months to clog, resulting in the worst accidental oil spill in history and coating the Gulf with 205.6 million US gallons, or 4.9 million barrels of oil.

The environmental and economic damage could take years to tally.