NEW YORK – BP’s efforts to contain its spill in the Gulf of Mexico again hit a snag Wednesday morning as a diamond bladed saw became stuck in a thick portion of the riser pipe at the scene of the Deepwater Horizon blowout, and freeing it this afternoon revealed that the wire saw was no longer effective, a BP spokesman said. 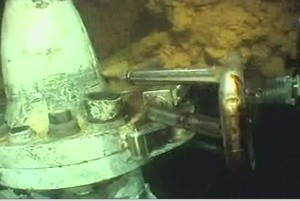 US President Barack Obama took advantage of the damaged saw – the latest in a litany of failures by BP to staunch the flow – to refocus the nations attention to developing clean energy in a speech at Carnegie Mellon University in Pittsburgh, Pennsylvania.

The effort underwater was going on as oil drifted close to the Florida Panhandle’s white sand beaches for the first time.

In running the gauntlet of trying to stop the volcano of oil 50 miles off the Louisiana coast and a mile beneath the surface BP has tried numerous approaches. Efforts soon after the explosion to close valves on the well’s blowout preventer device failed; so did several attempts to capture leaking oil with a containment dome. Last week’s “top kill” effort to seal the well by forcing drilling mud and solid debris into it also fell short and was abandoned.

The diamond blade saw, which is cutting a section of bellow the well’s crippled blowout preventor became stuck earlier today, said Andrew Gowers, a spokesmand for BP, and the Coast Guards. When the saw was finally freed, said Gowers, it was found to be damaged beyond further operation.

He said efforts to cut the riser pipe will continue either by replacing the saw with another that is waiting on a surface vessel, or that BP will cut the remained of the pipe with a pair of robotically operated shears measuring 20 feet.  He was unable to say how long the replacement efforts would take.

The operation to cut the pipe is part of BP’s nearly last ditch strategy to staunch, not stop, the flow of oil in a so-called “lower marine riser package cap,” or LMRP, officials at the spill’s Joint Information Centre (JIC) said.

The company was able to successfully make one cut in the pipe overnight using giant shears. But the second, more precise cut closer to the top of the blowout preventer, was delayed when the saw became stuck.

The company was able to successfully make one cut in the pipe overnight using giant shears. But the second, more precise cut closer to the top of the blowout preventer, was delayed.

The second cut is crucial to BP’s latest attempt to corral the thousands of barrels of oil spilling daily into the sea. Undersea robots are attempting to cut and remove the bent and broken riser pipe from the failed blowout preventer, so that a cap affixed with a suction tube can be put in its place. The tube would act as a straw and draw oil and natural gas to a ship on the surface.

Meanwhile, oil has been observed some 10 miles off Florida beaches, which have thus far remained unscathed while more than 100 miles of Louisiana coast taking the brunt of beached oil.

The Justice Department also has announced it started criminal and civil probes into the spill, although the department did not name specific targets for prosecution.

Coast Guard Adm. Thad Allen, who is coordinating efforts to staunch the spill, said early today that the goal was to free the saw and finish the cut later in the day, The Associated Press reported.

“It’s like chopping down a tree – tremendous force is exerted on the saw and will bend it, making it unworkable,” he said. “They can continue to replace saws, but the same thing will continue to happen over and over again and there is no time for that.”

The best chance at stopping the leak is still at least two months away, when two relief wells are expected to be completed.

In the meantime, the LMPR effort will increase the flow of oil into the Gulf by at least 20 percent – or 100,000 gallons – more per day. To counteract that, BP is spraying dispersants on the at the bottom of the ocean, a controversial move that came early in the process of controlling the spill and is thought by several scientists to be responsible for enormous underwater plumes of oil and dispersant.

The finishing line for the LMPR effort is when the cut pipe is capped and the siphon begins to pump oil to a tanker ship on the surface, but cap and suction tube contraption can only be put into place after the second cut is made with absolute precision and the pipe is removed.

The operation is only expected to collect some of the oil as the leak continues. Meanwhile operations to drill relief wells are running ahead of schedule according to the White House website

“The time has come, once and for all, for this nation to embrace a clean energy future” that includes more energy-efficient cars and homes and more nuclear power plants, Obama told the audience of several hundred small-business people and local officials at the university.

He also called for a rollback of tax breaks for oil companies worth billions of dollars. But his call for nuclear power does not site well with many environmental organisations, including Bellona. Nuclear power was added to the stalled Senate Climate and Energy bill in an effort to fish out more Republican votes for the Bill. The lift on a 20-year-old moratorium on offshore drilling in several sites off the US coast was also added to the bill to placate Republicans two week before the Deepwater Horizon blowout.

“If we refuse to take into account the full cost of our fossil fuel addiction — if we don’t factor in the environmental costs and national security costs and true economic costs — we will have missed our best chance,” Obama said. “The votes may not be there right now, but I intend to find them in the coming months.”

The gulf disaster, he said, “may prove to be the result of human error — or corporations taking dangerous short cuts that compromised safety,” but the nation “must acknowledge that there are inherent risks to drilling four miles beneath the surface of the Earth, risks that are bound to increase the harder oil extraction becomes.”

Live feeds from the ocean floor showed spewing oil from the site of the sawed pipe.

Florida readies for the worst

In Florida, officials confirmed oil sheen Tuesday about nine miles from Pensacola beach, where the summer tourism season was just getting started.

Winds were forecast to blow from the south and west, pushing the slick closer to western Panhandle beaches.

Emergency crews began scouring the beaches for oil and shoring up miles of boom. County officials will use it to block oil from reaching inland waterways but plan to leave beaches unprotected because they are too difficult to protect and easier to clean up.

“It’s inevitable that we will see it on the beaches,” Keith Wilkins, deputy chief of neighborhood and community services for Escambia County, Florida, told the Associated Press.

Earlier this week, BP officials said they were concentrating cleanup efforts in Louisiana because they did not expect oil to reach other states.

The oil has been spreading in the Gulf since the Deepwater Horizon rig exploded six weeks ago, killing 11 workers and eventually sinking. The rig was being operated for BP, the largest oil and gas producer in the Gulf.

Crude has already been reported along barrier islands in Alabama and Mississippi, and it has polluted some 125 miles of Louisiana coastline.

Allen, the national incident commander for the spill, said the threat of oil hitting the coast was shifting east and skimmer vessels would be working offshore to intercept as much crude as possible.

But as of last night, the Joint Information Command Centre said only some 13.5 million gallons of water and oil mix had been collected. This likely represents an insignificant figure in comparison to the 19 million gallons that have already spilled from the volcano-like well, according to federal officials.

Early reports of skimmers progress at the beginning of the month indicated that of 200,000 some gallons of oil and water slurry collected, 90 percent of the take was water.

BP, the London-based oil giant, tried on Wednesday to reassure investors that the cost of cleaning up the oil spill, estimated at $1 billion or more, would be manageable for the company.

“If our current efforts were to fail and we have to wait for the relief wells to be drilled and had six months of cleanup, we estimate the cost at $3 billion,” Tony Hayward, BP’s chief executive, told The Daily Mail, adding that the company’s cash flow of $7.5 billion to $8 billion would be adequate to absorb the cost and maintain the company’s dividend.

In Washington, two Democratic senators, Charles Schumer of New York and Ron Wyden of Oregon, released a letter they had sent to Mr. Hayward urging BP not to pay out any dividends to shareholders until the full cost of the cleanup was known. Paying a dividend before then would be “unfathomable,” the senators told the New York Times.

After meeting with state and federal prosecutors in New Orleans, US Attorney General Holder told reporters that federal agencies will conduct a “meticulous,” “comprehensive” and “aggressive” investigation to see if companies involved in the oil spill have broken any federal laws.

“We will make certain that those responsible clean up the mess they have made and restore or replace the natural resources lost or injured in this tragedy,” Holder said. “And we will prosecute to the full extent any violations of the law.”

President Obama dispatched Holder to the Gulf Coast to tour the spill area and to meet with state and federal prosecutors in the affected area. Holder said federal attorneys are reviewing a “wide range” of possible violations to the Clean Water Act, the Migratory Bird Treaty Act, the Endangered Species Act, the Oil Pollution Act and other statutes.

Senate Democrats sent a letter to Holder two weeks ago calling for a full civil and criminal investigation into BP’s role in the ongoing oil spill. The letter from Environment and Public Works Chairwoman Barbara Boxer, a Democrat of California,  and a half-dozen other panel members said the oil company has consistently understated the risks associated with the deepwater drilling violation, E&E News reported.