NEW YORK – A containment cap on the ruptured well in the Gulf of Mexico is now funnelling off 11,100 barrels of oil a day in BP’s newest effort to contain the spill in the Gulf of Mexico, Coast Guard Adm. Thad Allen announced in televised remarks from the White House Monday shortly before he met with the Obama Administration.

Allen, the US Federal government’s point man on the cleanup efforts, however, warned that recovering from the volcano-like eruption of the spill would take years.

“Dealing with the oil spill on the surface is going to go on for a couple of months. After that it’ll be taken care of,” Allen said in response to a reporter’s question at televised White House briefing. “I agree with you, long-term issues of restoring the environment and the habitats and stuff will be years.”

The total amount of crude being collected from the ruptured undersea well responsible for the disaster increased Sunday to roughly 466,000 gallons — or 11,100 barrels – according to estimates from BP and Allen. Allen said Monday that 120 miles of coastline have been affected by oil. 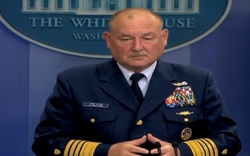 is also looking at bringing larger production vessels in, create a more permanent connection that can be disconnected easily in case we have a hurricane or bad weather later on in the hurricane season,” Allen noted. “And we’ll continue to optimize the production out of the well to contain it.”

The estimates for the total amount of oil that has leaked since the spill have begun vary widely from 20 million to 45 million gallons as two teams from the US Geological Survey, each using different methods, try to settle on a concrete number.

Four of the five states on the Gulf of Mexico have so far been directly affected by the spill – Louisiana, Mississippi, Alabama and Florida.

Florida reports that tar balls – the usual forewarning for the arrival of actual oil – from the spill are reaching its northwest coast, and that sea and bird life coated in oil has started to turn up as far west of the spill as Texas – the one state the Gulf that has not reported tar balls or oil thus far.

Allen also said Monday during his briefing that he was not sure what the flow rate from the well currently is. He announced at the White House press conference with White House Spokesman Robert Gibbs, that BP will step up use of underwater dispersants – something that many have blamed for the formation of huge underwater oil plumes of oil.

An online chat session scheduled for the public to ask questions about the spill on the White House’s website with Carol Browner, the president’s assistant for energy and climate change, has been postponed.

Specs on the containment operation and hurricane season

The spectre of a hurricane season that is predicted to be a rough one also looms – one which could cause surges of leaked crude to push far inland.

BP’s containment cap is designed to funnel most of the leaking oil to a boat on the surface. It will be followed by a further containment system that involves using the pipes of a failed previous operation to divert more oil to another vessel; and by a separate method – due to be in place by the end of this month – which is expected to be able to operate in hurricane conditions. Hurricane season started on June 1st and lasts until November 30th. One tropical storm in the far west gulf has already killed 12 in Ecuador.

BP is also digging two relief wells which it hopes will provide a permanent solution to the leak – but they are not due to be completed until August. As of last week, one of these wells was 7,000 deep, according to the White House website.

These efforts continue while the count of struggling or dead oil covered wildlife continues to mount in areas already hit, most prominently the bayous of Louisiana.

Though officials, oceanography institutes and universities are scrambling to come up with exact figures, they are no longer denying that dead sea life washing ashore is related to the oil spill as they were early in the month. Dead Kemp’s Ridley turtles found on the coast of Mississippi were discounted as natural deaths by Gulfport’s Institute for Marine Mammal Studies. And Louisiana State University oceanographers wrote off as a virus the appears of hundreds of dead catfish that washed up with the tar balls on the shores of Alabama’s Dauphin Island.

One-third of the Gulf’s federal waters remain closed to fishing. A House Natural Resources panel meets Thursday for the committee’s fourth in a series of seven hearings on the Deepwater Horizon oil rig explosion, the ongoing spill and the future of the nation’s energy policy.

Meanwhile, a major investigation by the New York Times published Saturday indicates that fierce arguments between BP, Transocean, which leased the Deepwater Horizon vessel to BP, and several other companies with a stake in the well, led to shoddy shortcut measures that contributed to a lack of control over the exploration rig.

Halliburton, which was responsible for contracting out the labour to affix the well casing to its defective blowout preventer was also implicated for slap-dash work, in the Times report.

Executives from Transocean Ltd, Halliburton and Anadarko Petroleum Corp, which owns a 25 percent share of the well, are to appear at an energy conference in New York on Monday, under pressure to explain how the spill happened and discuss its ramifications.

The squabble over who was in charge of the vessel – which was not the captain, according to the Times report – and who was pushing it to move faster in its oil explorations caused unsafe conditions as many as five weeks before the explosion that sank it, killing 11 and causing the worst oil spill in US history, the Times reported. The main signs of trouble were several gas emission to the well head, called kicks, that the rig began to experience when drilling Mississippi Canyon Block 252.

When the vessel’s operators contacted the US Minerals and Management Service, which oversees and collects leases for offshore drilling, a fierce internal email debate began at the agency. But those in the agency that wanted to grant the Deepwater Horizon and exception to keep drilling, despite the safety problems, prevailed over the rig workers’ objections and dissenters within the MMS, said the Times.

According to one drilling engineer who spoken with Bellona Web on the condition of anonymity, the excessive rate of kicks experienced by the Deepwater Horizon reported by the Times were a clear indication that “the rig should have pulled up its drilling line, sealed the well, and moved on.”

But with BP renting the Deepwater horizon at a rate of $500,000 a day while the company was already running several million dollars  behind schedule induced the decision to keep working the now-blown-out well, the Times reported.

Continuing federal investigations into culpability for the spill, including criminal ones US Attorney General Eric Holder said he plans to file, are predicted to become extraordinarily tangled by the sheer amount of companies and US government oversight agencies involved in the spill.