VENICE, Louisiana – An odd unspoken martial law pervaded the town that is still operations central for the Gulf of Mexico oil spill, a diminutive and shabbier version of its namesake with households that are lashed together and bob on barrels in the muddy waters of the Mississippi River– the houses of fishermen who are now largely out of work.

The floating shanty town resembling a third world refugee camp or a Great Depression era Hooverville is stitched together by a series of boardwalks, and each floating shack has a berth for fishing boats that are now either consigned to shore, aiding in oil containment attempts, or in some cases, still fishing in forbidden waters.

But the patchwork aesthetic of the water bourn community is the last and only vestige of character in this wasteland of oil refineries, prefabricated offices, toxic wastewater storage, warehouses and trailers stomped into the Mississippi Delta as if by the boot of a tasteless, hard-hatted deity.

The floating village in Venice Marina is abutted on one side by an enormous Halliburton facility, and on the other by a desolate, deserted parking lot but for government vehicles and one lonely NBC TV news crew van – the last of the media blitz.

A receptionist at the local Cypress Cove Marina Hotel was happy to see the rest of the media depart to either follow crude and chemical oil dispersant filled tar balls West to Port Fouchon, Louisiana and up the Gulf Coast to Dauphin Island, Alabama, Pass Christian, Mississippi, or just drop the story with the news cycle.

Gone are the articulate spokesmen for the government, the oil companies and the environmental movement who were still here just a few days ago when Bellona Web was stationed here. 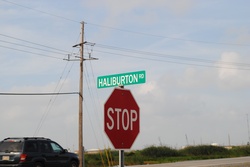 Left behind is the mute autocracy of Halliburton and the Coast Guard, which speeds around the village of secretive hangar-sized buildings and refineries, arbitrarily erecting check points staffed with National Guard soldiers and industry reps whose short, scripted answer to any question, including queries about the time, is: “I have no knowledge of that.”

Another for instance was Steve Miezykowski, of the US Fisheries and Wildlife Service. Miezykowski has been in Venice coordinating logistics of the service’s reponse vessels that investigate reports of injured or dead wildlife. He had said one dead and decompses sea gull had been found on shore since his deployment began May 1. But when asked about reports of oiled Pelicans reaching shore in Louisiana, Miezykowski suddenly recalled he had been in a boat that had picked one of these Pelicans up.

The Joint Information Centre in Venice, which coordinates information about oil movement, wildlife conditions, weather and other spill related events confirmed that 20 birds had been brought to the the centre’s animal rehabillitation unit. Five of them were oily and needed treatment, and two have been treated and released.

But sneaking around the cordons, however, reveals colossal military and civilian efforts to continue laying booms along Louisiana’s fragile marshland and bayou coast. Gov. Bobby Jindal mobilized National Guard units, who patrol in Humvees and armed amphibious armoured personnel carriers. Even hundreds of miles from Venice, marsh and bayou protection is overseen by the military or State Police units.

In Venice, dozens of flat bed vessels are sent out with booms as just as many return empty, only to be reloaded and returned down the river to sea. CH-47 Chinook helicopters flown by the Coast Guard hover while sand bags – another method deployed to keep oil out of the sensitive Delta – hover while tons are loaded into dangling nets.

Boats, too, both official and volunteer, also carry soft booms and so-called pom-poms that will be placed closer into shore to absorb anything the larger booms do not. Oil is predicted to start making shore in many Gulf States over the weekend. 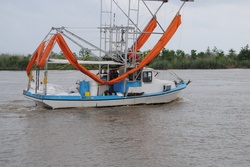 On the whole, said one security officer speaking on the condition of anonymity, over 1 million miles of boom have been deployed in the Gulf, most of it around Louisiana.

“Where the state outlined in orange you can see from the Space Shuttle,” he said. “We have doubled, then tripled up on everything.”

Resurge on spill coverage from Washington

The spill caused by the explosion and sinking of the BP–run Deepwater Horizon rig did again bubble to surface of newspapers’ front pages and the tops of radio and television broadcasts as US President Barack Obama Friday chastised the three companies involved in the spill, whose representatives were on Capitol Hill this week for a smarting round of hearings.

Referring to a congressional hearing Tuesday in which industry executives were grilled about what caused the spill, the president said he “did not appreciate what I considered to be a ridiculous spectacle during the congressional hearings into this matter.  You had executives of BP and Transocean and Halliburton falling over each other to point the finger of blame at somebody else.”

“It seems as if permits were too often issued based on little more than assurances of safety from the oil companies. That cannot and will not happen anymore,” he said

Interior Secretary Ken Salazar, Mr Obama added, was working on a “top-to-bottom reform” of the MMS.

It was announced earlier that the MMS department which permits oil and gas drilling and collects royalties would be separated from the MMS department in charge of inspecting the safety of oil rigs and platforms and enforcing the law.

“The system,” said Obama, “has failed, and failed badly.”

‘Real help’ on the way

Oil has continued to leak from the ruptured pipe and well drilled by the Deepwater Horizon at a Coast Guard assessed rate of 5,000 barrels – but which BP itself actually suggests could be as much as 70,000 barrles a day –  unabated for the last 24 days.

Frustrated by BP’s failure to stem the flow of the oil over nearly a month of failed efforts, US Energy Secretary Steven Chu hand-picked a team of scientists with reputations for creative problem solving.

Members of the Chu team are credited with accomplishments including designing the first hydrogen bomb, inventing techniques for mining on Mars and finding a way to precisely position biomedical needles.

The team includes Tom Hunter, director of the Department of Energy’s Sandia National Labs; George Cooper, an expert in materials science and retired professor from UC Berkeley; Richard Lawrence Garwin, a physicist and IBM Fellow Emeritus; Jonathan Katz, a professor of physics at Washington University; and Alexander Slocum, a professor of mechanical engineering at the Massachusetts Institute of Technology, AFP reported.

On Friday, BP continued to toil with remote-controlled robots to thread a six-inch (15 cemtimeter) tube surrounded by a stopper into the 21-inch pipe spewing crude oil and natural gas at a high rate into the water. If the attempt is successful, the tube could siphon leaking oil and gas into a tanker on the surface, allowing oil workers to concentrate on cleaning up the already-spilled crude.

In addition, BP was preparing to deploy a metal box, or top hat, to cap the leak, where an earlier larger one had failed.

On Louisiana and Mississippi’s ubiquitous AM radio call in talk shows, listeners and hosts are united in their opinion that the nearly month long stall, and counting, behind the shutting the oil gusher is that BP wants to have its cake and eat it too – electing method after method that prioritises saving the crude over actually stopping its flow.

Energy Secretary Chu said he’s tasked his team to develop “plan B, C, D, E and F” in addition to finding a way to stop the oil leak.

“It’ll finally be nice to have someone working on the problem that actually has, maybe, some engineering experience,” quipped Andy Cook, a professional Tuna fisherman who lives in Venice Marina. But with or without the public and government eye focussed on the community “things will never be the same around here again, ever, thanks to the spill,” said Cook.
[picture4 right]Cook willingly admits that he and his two friends, who identified themselves only by their first names, Lee and Steve, daily fish water zones that are currently prohibited. Tuna fishing is deep sea fishing, and he said they routinely drop hooks within the slick area 50 miles off the coastline, where he, like many others, reports oils seems submerged, like a gas rainbow beneath a clear surface.

“A guy’s gotta make a living,” he said, declining to comment on how he evades Coast Guard inspections of his hauls.

“Now this shit,” said Cook, pointing at the dense, muddy Mississippi River on which the shacks creaked. “This is were I would never catch a fish to eat.

Thirty miles to their west by water, in Port Fouchon, tar balls of crude and dispersant as large as nine inches have made landfall. One hundred and fifty miles to the east, the tar balls still assault Dauphin Island in Alabama, where thousands of workers clean them. On Grand Isle, near Port Fouchon, an oily pelican was found flailing in Sand Dollar marina.

As evening winds bring the smell of crude up the river and into Venice Marina, Cook and his friends are pursuing Clyde, an enormous bass swimming between the shacks that Cook claims to have caught hooked times already, only to loose him to broken fish line. Clyde is not headed for Cook’s dinner plate but only, Cook’s adversary in beer-soaked cat and mouse. Clyde is proving more evasive to Cook’s efforts this evening.

“Oil spill or no oil spill, the catfish will survive,” said Cook. “They’ll always be here even after the world blows up, like roaches.”