PASS CHRISTIAN, Mississippi – Mayors along the Gulf Coast of Mississippi are today huddling on how to deal with the BP oil spill that is predicted by the National Oceanographic and Atmospheric Administration (NOAA) to hit their shores Sunday, while federal authorities brace for a variety of health hazards to humans when the full toxic brunt of the slick hits shores.

Mayors from Bay St. Louis to Gulfport, Mississippi, will be holding a press conference that some say may include announcements of evacuation plans later today, while a group of Congressmen led by Ed Markey (D-MA), Chairman of the Energy and Environment Subcommittee will be holding similar meetings in New Orleans, 70 kilometres to the west of this small community.

The oil has been gushing from the well nearly unabated for 18 days at a rate of some 200,000 gallons (757,00 litres) a day. BP is trying to position a funnel to capture the oil over one of three leak points at the bottom of the Gulf of Mexico.

Health risks from the oil at sea include temporary, minor nuisances such as runny noses and headaches to long-term risks such as cancer if contaminated seafood ends up in the marketplace.

Public health agencies in Alabama, Louisiana and Mississippi advised people near the coast who experience nausea, headaches or other smell-related ailments to stay inside, turn on air conditioners and avoid exerting themselves outdoors.

The US Centres for Disease Control and Prevention is working with epidemiologists in the Gulf states to develop studies of health repercussions from the oil spill. 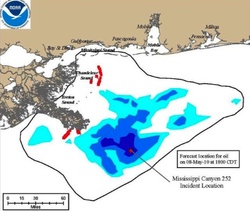 While waiting to see how bad things will get, public health agencies are monitoring air quality, drinking water supplies and seafood processing plants and advising people to take precautions.

“We don’t know how long this spill will last or how much oil we’ll be dealing with, so there’s a lot of unknowns,” said Dr. Jimmy Guidry, Louisiana’s state health director. “But we’re going to make things as safe as humanly possible.”

In a possible hint of things to come, a foul stench drifted over parts of southwestern Louisiana last week. The smell was still apparent in Bay St. Louis as late as yesterday. Oil is the likely culprit, said Alan Levine, secretary of the Louisiana Department of Health and Hospitals, whose office heard about dozens of complaints — even from state legislators in New Orleans, some 130 miles (209 kilometers) from the leaky undersea well.

“Their eyes were burning, they felt nauseated, they were smelling it,” Levine said.

Further up the coast at Shell Beach, marina operator and commercial fisherman Robert Campo told the Associated Press the smell gave him a headache as he collected oysters 20 miles offshore. “It was rotten,” he said.

The US Environmental Protection Agency has began round-the-clock air monitoring in Gulf coastal areas and posting online hourly readings for ozone and tiny particles such as soot.

Both can cause respiratory problems and are particularly aggravating for people with chronic conditions such as asthma, Dave Bary, an EPA spokesman in Dallas, told Bellona Web.

What does oil do to people?

Crude oil emits volatile organic compounds that react with nitrogen oxides to produce ozone. Fires being set by the Coast Guard to burn off oil on the water’s surface would produce sooty, acrid smoke, said the EPA.

The potential for unhealthy air quality depends on a variety of factors, particularly the speed and direction of winds that could disperse fumes and determine where they go, said Jonathan Ward, an environmental toxicology professor at the University of Texas Medical Branch at Galveston.

With the leaky Gulf well some 50 miles offshore, Ward said much of the oil vapor likely wouldn’t reach land, although the potential for air pollution from the slick will remain as long as the leak continues.

People working around the Gulf spill should be equipped with respirator devices and wear heavy-duty gloves and protective clothing to guard against painful skin rashes, Gina Solomon, an associate professor at the University of California-San Francisco medical school and a senior scientist with the Natural Resources Defense Council, told AP.

Last night, BP conducted oil burns of the Gulf Coast, which filled the air with the viscous smell of gaslight oil from past 10 p.m. local time to about 4 a.m. local time. 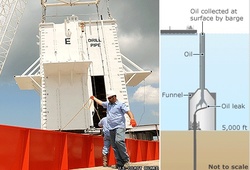 As of this morning, BP was attempting to lower an enormous 90-ton metal containement funnel to one of the holes at the leaking well 5,000 feet (1,500 kilometres) below the surface. A crane is lowering the 90-tonne device, which is hoped to be operational by Monday.

Earlier, oil from the massive slick started washing ashore on an island chain off the coast of Louisiana.

Pelicans and other birds were found covered in oil on the uninhabited Chandeleur Islands – the second oldest national wildlife refuge in the US and home to countless endangered birds.

A federal maritime agency spokesman said there was “oiling all over” the islands.

But even lowering the funnel, which will then be attached to a hose to pump oil onto tankers, is not expected to do much good, according to BP’s own CEO Tony Hayward.

“It’s only one of the battle fronts,” said Hayward yesterday while surveying the leak site from a helicopter, the New York Times reported.

BP said earlier it hoped the gigantic concrete and steel containment device, once operational, would contain about 85 percent of the oil leaking out. The technology has been used a few times in shallow waters, but never at such extreme depths and under such high pressure.

There is also a chance that the device could damage the well and make the leak worse.

Other risks include the drill-pipe becoming clogged with ice, and explosions when separating the mix of oil, gas and water on the surface.

On Thursday, the US Coast Guard confirmed for the first time oil had made its way past protective booms and was washing up on land on the Chandeleur Islands chain off the coast of Louisiana.

Heavier concentrations of crude remain further offshore, and the Coast Guard said weather forecasts suggested it would stay there until the weekend.

BP said emergency teams had been sent to Freemason Island, a favourite fishing spot for recreational anglers some 30 miles (50 kilometres) off Louisiana’s coast, to deploy inflatable booms to protect its prime marshland.

Fears are growing that sea life has been severely affected in the area, which includes vital spawning grounds for fish, shrimp and crabs.