PASS CHRISTIAN, MS/VENICE, LA – Officials from British Petroleum who operated the exploded Gulf of Mexico Deepwater Horizon oil rig Tuesday told congressional representatives that the resulting oil spill could grow at a rate of more than 10 times of current estimates in a worst-case scenario – greatly enlarging the potential scope of the disaster.

Most of the handful of congressional Democrats and Republicans who met with representatives from BP, Transocean Ltd. and Halliburton in a closed-door briefing on Capitol Hill walked away unimpressed. BP rushed a day ahead of schedule to deploy an enormous containment funnel over one of the three leaks at the bottom of the Gulf this morning. But the US Coastguard said the success of the operation is not expected to significantly reduce the overall flow of oil into Gulf waters.

Bellona President Frederic Hauge, who is in Louisiana with Bellona USA Director Jonathan Temple and other Bellona staff, said after a helicopter ride over the spill that he had seen “a lot of oil,” certainly more than was being discussed on the ground in Venice, Louisiana, which, at 50 miles north of the exploded rig, is the chief clean-up coordination centre.

Hauge, who photographed the slick, predicted the leak would get worse in days to come, and among the lawyers descending on BP with lawsuits is Robert Kennedy Jr., son of the former presidential candidate and a prominent environmental lawyer. 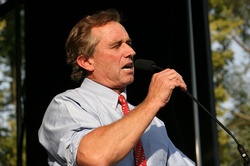 In other developments it was discovered that Interior Department exempted BP’s Gulf of Mexico drilling operation from a detailed environmental impact analysis last year, according to government documents, after three reviews of the area concluded that a massive oil spill was unlikely, The Washington Post reported.

The decision by the department’s Minerals Management Service (MMS) to give BP’s lease at Deepwater Horizon a “categorical exclusion” from the National Environmental Policy Act (NEPA) on April 6, 2009 – and BP’s lobbying efforts just 11 days before the explosion to expand those exemptions – show that neither federal regulators nor the company anticipated an accident of the scale of the one unfolding in the gulf, said the paper.

BP backing out of reparation payments?

Meanwhile, BP Chief Tony Hayward balked at privately balked at committing to paying all claims for economic damage caused by the company’s oil spill, Florida Democratic Senator Bill Nelson told reporters disclosed after the two met yesterday. Haywards comments as reported by Nelson are in direct contradiction to the BP head’s public statements since Monday – and even remarks he made directly ahead of Nelson in the closed-door meeting.

An observer who attended the meeting said that the companies’ representatives had a “deer in headlights” look and that the tenor of the conversation was that the firms “are attempting to solve a problem which they have never had to solve before at this depth…at this scope of disaster. They essentially said as much.”

“What we heard was worst-case scenario, with no good solutions,” said the source, who was not authorized to speak publicly about the meeting.

Hayward, meanwhile, in a separate interview Wednesday reiterated his promise to pay all claims, but was also dismissive of what he called many illegitimate claims that would be coming BP’s way.

Asked for examples of illegitimate claims, he said: “I could give you lots of examples. This is America – come on. We’re going to have lots of illegitimate claims. We all know that.”
[picture2 right]Yet, only two days ago, Alabama Attorney General Tony Scott reprimanded BP for sending representatives in impoverished bayou communities – many of which have only begun to recover from 2005’s Hurricane Katrina – offering $5,000 payments to residents in exchange for signing contracts saying they would not participate in lawsuits against the company.

“BP is responsible for — and will be held accountable for — all of the very significant cleanup and containment costs. They will pay for the mess they’ve made,” White House communications director Dan Pfeiffer wrote on the White House Blog yesterday, adding later: “The bottom line is that the administration will aggressively pursue compensation from BP for any damages from this spill.”

In contrast to prevailing notions yesterday that improved weather would allow BP to lay more booms to contain the spill, officials told Congress they are now estimating that the geyser of oil could reach 60,000 barrels a day, or 2.5 million gallons, up form 5,000 barrels.

If the Gulf spill reaches those proportions and continues at that rate for only four days, it would eclipse, including the 1.6 million gallons of oil already estimated to be in the Gulf, the 11 million gallons spilled by the Exxon Valdez.

US Coast Guard Rear Admiral. Mary Landry, commanding officer of the guard’s District 8 in New Orleans, said the best guess was that the slick remained at least 20 miles off the coast. BP officials said they were forecasting that the oil would not make landfall for three more days.

But Lyle Panepinto, a seaplane pilot in Louisiana, said he saw a band of oil about 10 feet wide and several miles long circling the north end of Chandeleur Island about 50 yards from the beach, The Los Angeles Times reported.

Chandeleur Island is one of the prime fishing locations in the Gulf, and oil making land there will kill the fishing industry there for a decade or more to come, environmental experts have said.
[picture3 left]On the flip side, Alabama Governor Bob Riley told reporters that if the weather holds, “we are going to be in pretty good shape here.…It’s a great thing that we have a few more days now to make sure we get all of the booms and barriers in place.…It’s going up very, very rapidly.”

The rest of the Gulf Coast remained tense, making preparations for landfall. “We are facing a hovering menace out there that keeps changing shape and size by the hour,” said Dan Turner, a spokesman for Mississippi Governor Haley Barbour. “But we don’t really know what to expect. If it hits, will it be a sheen of microscopic globules, or will it be tar balls washing up on the beaches?”

Papantonio filed a class-action negligence lawsuit Friday that named as defendants Transocean, which leased the Deep Horizon rig to BP, BP itself and Halliburton, the Houston engineering giant that worked to seal the well with cement.

Papantonio said employees of the defendants have alleged that the rig was drilling deeper than the approximately 20,000 feet allowed by its federal permit – a claim BP denies –  and that BP failed to install a “deep-hole safety valve” that could have cut off the flow of oil after an accident.

Workers have also said the concrete seal was not properly formed and allowed pressurized natural gas to shoot up into the rig, where it ignited into an inferno. Bellona’s Hauge said Monday that oil industry experts agreed this was the most likely cause of the accident.

In remarks to the Times of London, Hayward lashed back at accusations that BP had reacted too slowly, saying he company would have a giant steel hood in place over the worst leak by tomorrow.

Yet Hayward told the Associated Press yesterday that, “There’s no guarantees,” adding, “We’ll undoubtedly encounter some issues as we go through that process. But if that was a good outcome, then you would have the principal leak contained by the early part of next week.”

Hayward told the Time of London that claimed that the company was winning the race to contain the spill and indicated that it was ready to fight some of the lawsuits heading its way.

“Let’s be very clear,” he said of the slick. “The reason it’s not getting to the beaches is because we’re containing it. We don’t know if we can continue to contain it, but for the moment we are.”

He dismissed claims that the rig should have activated the blowout preventer at the well head with an “acoustic switch” – they were useless at 5,000ft, he said –
and that fire booms should have been used to ignite the slick, the London Times reported.

“We couldn’t keep the fire alight because the sheen is too thin,” he said.