NEW YORK/PASS CHRISTIAN, Mississippi – US President Barack Obama arrived in Louisiana on Sunday to view firsthand the efforts to fight the massive oil slick spreading like a virus across the Gulf of Mexico as recriminations escalated over what was expected to become the nation’s worst oil disaster.

Aerial photographs have shown the slick of oil floating on the surface of the Gulf of Mexico to be approximately the size of Puerto Rico, the US National Oceanic and Atmospheric Administration (NOAA) reported today.

Obama said Sunday in televised remarks that his administration has mounted a “relentless response” to the oil spill unleashed by the sinking the Deepwater Horizon oil rig, which was being leased by British Petroleum, in the Gulf.

Obama touched down in the muggy drizzle at Armstrong New Orleans International Airport and headed to the Venice, Louisiana where he met with local, state and federal officials involved in the cleanup in South Eastern Louisiana, the closest stretch of coastline threatened by the massive spill. Afterward, he said that despite “the most advanced technology available,” the spill may not be stopped for many days.

“I’m not going to rest, and none of the gentlemen and women who are here are going to rest or be satisfied, until the leak is stopped at the source, the oil on the Gulf is contained and cleaned up and the people of this region are able to go back to their lives and their livelihoods,” Obama said from Venice. “We will spare no resource to clean up whatever damage is caused.”

Awaiting Obama on the tarmac was Louisiana Gov. Bobby Jindal who has been critical of industry efforts to deal with the leaks. The pair huddled at the foot of Air Force One for several minutes, talking in the rain.

Bad weather forced Obama, accompanied by Jindal, to take a two-hour car trip to Venice rather than use a helicopter, White House officials told Bellona Web.

In Venice, Obama met with the commandant of the Coast Guard, Adm. Thad Allen; EPA administrator Lisa Jackson; and the presidents of several parish governments after arriving, White House spokesman Robert Gibbs said. The president’s briefing included an update on the procedures being attempted to cap the well and the economic and environmental impact of the spill, Gibbs said.

Bellona President Frederic Hauge and Bellona USA Director Jonathan Temple are on hand in Venice to observe the events. 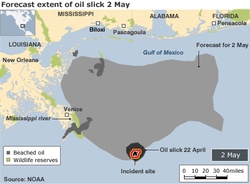 Some of Obama’s top officials said Sunday on various national news programmes that the spill is a potential catastrophe and were at pains to defend the administration’s response amid questions about the effectiveness of efforts to resolve the problem. Some quarters have been dubbing the spill as “Obama’s Katrina” in reference to the hurricane that ravaged the Gulf Coast in 2005, while the Bush administration remained idle.

Funding for reconstruction efforts are only beginning to trickle in from that disaster in towns like Pass Christian, Mississippi, a Gulf Coast fishing town, where anger and anxiety about the spill is growing.

A senior US official said it could take three months to contain the leak.

“The scenario is a very grave scenario,” Secretary of the Interior Ken Salazar said on the NBC news program “Meet the Press.” “You’re looking at potentially 90 days before you get to the ultimate solution, which is drilling a relief well 3 1/2 miles below the ocean floor. In that time, lots of oil could spread.”

Hopes are that such a relief well – which is already being drilled by British Petroleum – would divert the flow of oil from a ruptured well about 50 miles (80km) off Louisiana’s coast.

The BP-operated Deepwater Horizon rig sank on April 22nd, two days after a huge explosion that killed 11 workers. Estimates on how much oil has spilled so far continue to vary.

BP has said the well it was drilling is pumping some 5,000 barrels of oil a day into Gulf waters.

BP has been cagey about saying how much oil is in the reservoir it was drilling from the Deepwater Horizon platform, but one BP official, speaking on the condition of anonymity because he is not authorised to discuss the issue, said it contained “tens of millions of barrels.”

How will BP cap the well?

But questions remain about what BP plans to do to staunch the oil geyser 5000 feet, or 1,524 metres.

BP PLC chairman Lamar McKay told ABC’s “This Week” that he can’t say when the well a mile beneath the sea might be plugged. But he said he believes a 74-ton metal and concrete box — which a company spokesman said was 40 feet tall, 24 feet wide and 14 feet deep — could be placed over the well on the ocean floor in six to eight days..

McKay said BP officials are still working to activate a “blowout preventer” mechanism meant to seal off the geyser of oil.

“And as you can imagine, this is like doing open-heart surgery at 5,000 feet, with — in the dark, with robot-controlled submarines,” McKay said.

Another BP spokesman, Steve Rinehart, said the oil will flow into the chamber and then be sucked through a tube into a tanker ship at the surface.

Bellona President Hauge said that this strategy is one that may work, depending on the pressure of the oil that is being released from the borehole at the bottom of the ocean.

BP did not build the containment devices before the spill because it “seemed inconceivable” the blowout preventer would fail, Rinehart said.

“I don’t think anybody foresaw the circumstance that we’re faced with now,” he said. “The blowout preventer was the main line of defence against this type of incident, and it failed.”

Salvin said McKay was talking about the blowout preventer as the failed equipment that caused the April 20 explosion of the Deepwater Horizon rig.

But a blowout preventer failure is still under question as the cause of the leak, said Bellona’s Hauge.

The Associated Press reported that offshoots from the spill had made their way into South Pass, an important channel through the salt marshes of Southeastern Louisiana that is a breeding ground for crabs oysters, shrimp and redfish sold by a number of small seafood businesses dependent on healthy marshland for their livelihood.

“This is the very first sign of oil I’ve heard of inside South Pass,” Bob Kenney, a charter boat captain in Venice, told the AP. “It’s crushing, man, it’s crushing.”

Meanwhile, residents of towns like Pass Christian, where the oil is only a short distance off the pristine white beaches, fishermen were already pulling up shrimp that they said smelled like diesel fuel. Many Fishermen, expecting that this fishing season, if not most fishing seasons for the rest of their lives, are lost continue to queue up for jobs helping contain the spill.

City of Pass Christian Patrol Officer Gus Holliman has spent the last two days riding the beaches of coastal Mississippi, hoping not to find dead animals. But on Saturday the sea turtles started washing up on shore. On Sunday, the turtles were joined by dead catfish, horseshoe crabs, and birds – a duck, a pelican and a seagull.

Before the Deepwater Horizon rig explosion, Holliman says the city might see a small turtle wash up every six months, victims of fishing nets or dead from natural causes.

“But we’ve never seen this many,” he says, shaking his head. “Something’s going on; we just don’t know what.”

“They’re out of reach until he’s probably my age,” Bosarge, 42, told Peggy Groves, who is reporting on the spill’s effect on her community for Bellona Web, as Bosarge pointed to his son Roy, who is 15.

“Just take a picture and put it in a museum,” said Bosage bitterly.

Winds from the southeast have nudged the slick northward, where it floated Sunday near the coasts of Louisiana, Alabama and Mississippi as residents waited anxiously for it to arrive.

“Mother Nature gets a vote in this thing, and that’s probably the most unpredictable thing we’ve got,” said Adm. Thad Allen, commandant of the U.S. Coast Guard. “There’s enough oil out there to impact the shoreline. The real question is when and where.”

High waves had kept many boats in the harbor, so few had had the chance to see the slick firsthand.

“We figure the summer could be gone,” Tommy Mixon, a recreational fisherman from Mississippi, meaning the fishing season, told The Washington Post.

“Who knows when they’re going to get it stopped,” he said.

Failure to plug the leak could have dire effects in places such as Pass Christian, whose marshes are the nurseries for sea life here.

“If they don’t stop the leak, the wind’s just going to shove it around, and it’s going to paint the whole coastline from Florida to . . . Yucatan,” Bosarge said.

On this day, he, his son and one of Roy’s friends were taking off the boat’s oystering equipment and preparing for a shrimping season that may never begin. He compared the effort to a man who has just had his house destroyed by a tornado going outside to sweep the front walk.