NEW YORK – The relationship among federal officials, Gulf State officials BP, which is already frayed around the edges as oil lapped deeper into Louisiana’s bayous and ecologically vulnerable marshlands from the month old Deepwater horizon spill, looked like it may tear altogether as some suggested pushing BP off the job.

For many local residents, the oil, which began tainting some 50 mile of Louisiana coast line on Wednesday and Thursday, came as a thick black catharsis after remaining an abstract entity somewhere at sea for weeks.

Now that it is here, the anger is coming from all economic and demographic quarters from state governments, parish presidents, the fishing industry, the tourism industry, environmentalists and the federal government over just about every aspect of the job BP is doing to block the well to its heavy used of chemical dispersants, called Corexit, which is manufactured by an Illinois company whose executives and board are made up mostly of for BP and Exxon executives.

BP has been promising to try a so-called “Top-Kill” – a process involving pumping thick, viscous fluid twice the density of water at a high rate into the site of the leak to stop the flow so the well can then be sealed with cement.


BP Chief Tony Hayward warned Monday in Louisiana, however, that the operation, which is scheduled for Wednesday –  but may not be attempted until later in the week to complete various test –  may not work anyway.

Hayward estimated the “top-kills” success at about 60 percent – about the same odds he gave the failed metal funnel that was lowered over the leak, only to ice over with hydrocarbons at 5,000 feet below the sea.

On Monday, administration officials who, with Louisiana Gov, Bobby Jindal, visited some of the effected parts of Louisiana’s bayou spoke in the town of Galliano, Louisiana. Frustration looked ready to have a blowout of its own as officials said they were “beyond patience” with the BP.

Doug Suttles, BP’s operations chief, however, lashed back, saying, “If the government felt there were other things to do it is clearly within the power of the government to do that. Everyone is very, very frustrated.”

Jindal himself has has gone so far as to defy slow government authorities by beginning to build concrete and stone berms around the wetlands to keep oil that has breached booms out of what wetlands he can. He had requested federal funding to put dredgers on this project weeks ago, but after the ensuing silence form Washington, Jindal Sunday mobilized the one dredge in the area to start the work.

Feds angry, but concede BP is only company for the job

On us television Sunday, Interior Secretary Ken Salazar – who early in the crisis vowed to “keep the boot on the neck” of BP –  threatened to push the company out of the way.

But on Monday, Salazar backed off, conceding that BP and the oil companies have access to the best technology to attack the gushing well, a mile below the surface, even though that technology has proved so far to have fallen short of its one purpose. The government’s role, he acknowledged, is largely supervisory and the primary responsibility for the spill, for legal and practical reasons, remains with the company. 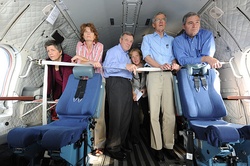 “The administration has done everything we can possibly do to make sure that we push BP to stop the spill and to contain the impact,” told reporters in Galliano, Louisiana, about 25 miles north of Grand Isle, which along with Venice, Port Fourchon and Elmer Island, which have been hit with thick orange and brown sludge – the mix of crude and chemical dispersant.

“We have also been very clear that there are areas where BP and the private sector are the ones who must continue to lead the efforts with government oversight, such as the deployment of private sector technology 5,000 feet below the ocean’s surface to kill the well,” he said.

Jindal, speaking at the same press conference with Salazar and Homeland Security Secretary Janet Napolitano, in turn blasted the federal response. “We need more boom. We need more resources. We need the materials we requested to fight this spill,” Jindal told reporters.

“BP is the responsible party, but we need the federal government to make sure that they are held accountable and that they are indeed responsible. Our way of life depends on it,” he said. Jindal said that, as of Monday, slightly less than 70 miles of Louisiana coastline had been struck

Oil industry experts said they did not take seriously the sporadic threats by the administration that the federal government might have to wrest management of the effort to plug the well from BP. The experts said that the Interior and Energy Departments do not have engineers with more experience in deepwater drilling than those who work for BP and the array of companies that have been brought into the effort to stem the leak.

“It’s worse than politics,” said Larry Goldstein, a director of the Energy Policy Research Foundation, which is partly financed by the oil industry. “They have had the authority from Day 1. If they could have handled this situation better, they would have already.”

This was acknowledged in a White House briefing by Coast Guard Admiral Thad Allen, who is coordinating clean up efforts. Allen said he dismissed as “metaphor” the notion of pushing BP out of the way, and told reporters that, “To push BP out of the way would raise the question of: Replace them with what?”

Many op-ed pages in US  newspapers, however, have pushed for bringing National Space and Aeronautics Administration (NASA) on board.

“NASA could play a critical role in the pressing technical issues that now confront the oil spill in the Gulf. While it appears self-evident that all appropriate government agencies should be called on to act in any national crisis, NASA remains on the sidelines nearly a month since the fatal event in the Gulf,” wrote Robert Zaretsky, a history professor at the University of Houston in Monday’s edition of The Christian Science Monitor.

EPA and BP head for show down over dispersant

EPA Administrator Lisa Jackson also in Louisiana Monday said she “is not satisfied that BP has done enough” to explore other options. She said the EPA would launch its own investigation of how alternatives to Corexit 9500 fare in fighting oil in the Gulf.

Last week, in fact, Jackson had told BP’s Chief Operation Officer Doug Suttels to substitute Corexit with another dispersant of lower toxicity and on which more data was available. Writing Saturday to Jackson, Suttels declined the order.

On Monday, Jackson told reporters that, “The science of dispersants has not in any way kept up with the science and technological ability to extract fossil fuels, and that is a huge disconnect and is one that I recommend that we remedy.”

In a nod to the uncertainty over the safety of Corexit – mainly because it manufacturer Nalco refused to disclose its constituent elements, citing trade secrecy – she said the federal government has told BP to scale back its use of the dispersant on the surface by as much as 75 percent.

BP had released 785,000 gallons of dispersant into the Gulf by Monday, with 100,000 gallons of that amount below the surface – a controversial method that some scientists have questioned. More than 340,000 gallons of Corexit remain available.

BP has asserted that there simply isn’t enough of any other kind of dispersant available to fulfil the needs of cleaning this spill.

But the makers of Dispersit – a chemical oil dispersant rated by the EPA as twice as effective as Corexit and one-third less toxic – refute these claims. They said Monday that they could meet BP’s demand and that the ingredients of their dispersant are public.

The manufacturer of Dispersit, US Polychemical Corp. in Chestnut Ridge, NY, says it can readily increase production to meet the unprecedented demand.

Moreover, said Bruce Gebhardt president of US Polychemical Corp,.  Dispersit is a patented product, so its chemical makeup is public record, which would clear up any questions regarding its effect on marine life. “Everyone has access to our information,” he told The Christian Science Monitor.

BP could not be reached to respond to Gebhardt’s comments, given that all media calls are being deflected to their website.

Oil is now is creeping to the western mouth of the Mississippi River, a nightmare scenario Jinal and federal officials had hoped to avoid by laying extra booms.   After a day of touring the affected region, Jackson told reporters she is “never more convinced than now … that BP, Transocean, and Halliburton have a big job in front of them.”