BETWEEN SHIP ISLAND AND GULFPORT, Mississippi – On a boat full of contented sunbathers and beachcombers returning from the Ship Island Mississippi nature preserve, oblivious to the spreading ink stain at sea, Captain Louis Skrmetta pulls out poster-sized depth charts on the bridge of the Gulf Islander, and points out marshlands that will be wiped out like a general strategising fronts of attack.

The depths he shows on the massive maps are four feet, five feet, six feet. “How are you supposed to get a dredge in water that shallow to pick up oil?” he asks rhetorically, knowing the answer all too well: you can’t.

He is speaking of cleaning-up the oil that continues to spew like a geyser 5,000 feet down from where the BP operated Deepwater Horizon rig exploded and sank last month.

Tourists and residents alike continue to wait for the effects to be felt along the Mississippi Gulf Coast, which has been bracing for disaster for the last 20 days. Many, now that the network news vans have left town, feel they dodged a 2.9 million gallon bullet.

But Skrmetta, who is also CEO of Gulf Island Excursions, knows better – he has been sailing these waters since he was young enough to sit on his father’s lap while he piloted the charter vessels of the family business that was founded in 1926. Simply dropping Skrmetta’s name among local sport and professional boaters brings approving nods associated with the sighting of a Hollywood celebrity.

But with each passing day, everyone seems less sure about what will happen to the Gulf Coast. Each morning brings new predicted landfalls for oil from the National Oceanic and Atmospheric Administration, or NOAA, and each new sizzling afternoon on its white sands sees more beach bums scoffing at the predictions that fail to materialize.

“The wait has been almost like water-boarding,” Skrmetta said, referring to the US-popularized torture method for terrorism suspects. “We know it’s coming – but the visitors who come from inland don’t get it. But those of us who do get it know it’s just a matter of time. I’ve been stressed out about this for two weeks.”

As he speaks, black-headed, red-beaked laughing gulls weave and dive around the ship aiming for popcorn nibbles from passengers, and a flotilla of dolphins jump and submerge off the bow like a festive convoy escort.

Added to these frustrations is BP’s list of failures to contain the spill, which official estimates put at 5,000 barrels of oil a day. First BP tried to robotically deploy chemical dispersants, both at the foot of the plume, and on the surface. Then they burned oil at sea.

Then they built a giant metal funnel to lower over the underwater gusher to contain it and pump the oil to surface tankers – but ice crystals forming at the bottle-neck of the 98-ton tank dashed that plan and sent engineers back to the drawing board for what could be weeks.

Skimmers have also been at work scooping oil off the surface of the water, but aside from getting easily jammed by the gook caused by mixing the oil dispersant Corexit 9500 with oil, the figures for oil recovery trumpeted by BP actually damn them with faint praise.

It was announced over the weekend that skimmers have processed 2.1 million gallons. But the fine print the broadcast news failed to mention was that some 90 percent of that take was water, meaning the skimmers have picked up a total of 210,000 gallons of actual oil – the same amount that the leak is pumping daily into the Gulf.

Ironically, BP has dumped more highly toxic Corexit 9500 on the leak than the oil they have managed to skim. According to BP spokesman John Curry, 253,000 gallons of Corexit have been sprayed from boats and planes on the slick – one third of the world’s supply.

Grasping at straws – and golf balls and tires

Describing what a junk shot is, Admiral Allen told CBS TV’s  “Face the Nation” programme, “They’re actually going to take a bunch of debris – some shredded up tires, golf balls, and things like that – and under very high pressure shoot it into the blowout preventor itself and see if they can clog it up to stop the leak.”

The failure of the blowout preventor, built by Halliburton, is seen as the main culprit for the continued leakage.

“BP has messed this up so bad that its almost like they want the oil to hit the shores so they can show pictures on the nightly news of BP workers out there diligently cleaning up after themselves for the good PR – ‘Look, everybody, we’re cleaning it up!’’’ said Skrmetta.

“They should have had the booms and the containment equipment to deal with this quickly and effectively. Instead, they stood around asking about where the equipment was while they poured on toxic dispersants,” he said.

Meanwhile, Mary Lynn Lytal of the Louisiana-based Sludge Solutions International has offered up the use of her company’s completely biodegradable solvent for use in destroying the oil to BP, but has been turned down flat, and told that BP already has enough dispersant on hand.

“Of course, if you use biodegradable dispersants, trucking companies that would haul away the sludge that washes up on would loose big bucks in government or BP contracts,” said Skrmetta.

At stake for Skrmetta are thousands of square miles of marshlands that are breeding grounds for fish, oysters, shrimp, mussels and sea birds, as well as the deeper water breeding grounds for the imperilled Atlantic bluefin tuna that spawn in the Gulf of Mexico, dolphins that feed on mullet, and mullet who are ingesting oil and chemical dispersant solvents, all of which leads to almost entire breakdown of the Gulf marine life ecosystem.

“What people don’t get about the spill is when it does hit, and when it gets into the marshlands, this will all be gone with the wind,” he said motioning to the entire clear sea in front of his ship.

“We’ve lost a part of our soul with this,” he said.

Evidence of corruption, or at the very least dirty political pool, surrounding the positive official spin local politicians are putting on the spill seems to be contributing to the public perception that the worst is either over, or will never arrive here.

Mississippi’s governor, Haley Barbour, has been at pains to assert that the spill poses no harm to the Barrier Islands or coast, but has been happy to declare a state of emergency – with the federal cash infusions that implies.

Elected in 2004, Barbour had previously served as chairman, beginning in 1993, of the Republican National Committee – a large supporter of, and recipient of funding from – offshore oil drilling companies. Upon ascending to Mississippi’s governorship, he fought hard with the state legislature to build oil rigs around Ship Island. He had to give up the pursuit because of Hurricane Katrina in 2005.

“Have you heard this guy? He might as well be a spokesman for BP,” said Skrmetta.

And Mississippi Congressman Gene Taylor is on record as saying of the oil spill: “This isn’t Katrina. This isn’t Armagedon,” words Skrmetta mocked, affecting a deep Mississippi drawl. Taylor was also quoted by reporters as saying that: “The oil will evaporate.”

Neither Barbour or Taylor’s offices would comment on their stance on offshore oil drilling when reached by Bellona Web.

Much of the effort to attempt to free up Mississippi waters for offshore oil drilling can be traced to former Vice President Dick Cheney’s shadowy energy programme that focused much of its efforts on pushing drilling on federaly protected lands. One of its most notable accomplishments was a lift the ban on drilling the Alaska’s Arctic National Wildlife Refuge in 2005.

“There’s a lot I’d like to tell BP, and it can all be traced back to Cheney and (former President George) Bush’s and Halliburton’s secret energy programme,” said Skrmetta. “My question to them is ‘where are you guys now?’ They are going to have to answer some uncomfortable questions before this is all over.”

Yet, Sunday afternoon on Ship Island 11 miles from shore, could have been like any other day at the beach for Skrmetta’s passengers – aside from a few dead animals washed up on its shores that may or may not be victims of the spill, according to the US National Park Ranger Service. 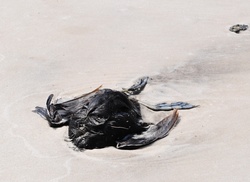 An assessment team comprised of the Coast Guard and BP officials patrols the Mississippi Barrier Islands daily by helicopter, and removes animals that are obviously victims of the spill, said Shaeppi, but the two birds may have been missed.

Aside from being the captain and CEO of Gulf Island Excursions, Skrmetta is a member of the politically and institutionally independent Gulf Oil Disaster Responders, a group of local fishermen, boat captains, environmentalists, restaurant owners and concerned citizens that watch the beaches and try to get out the truth on the spill, even as it fades in public memory as the news cycle changes.

Their independence allows them to keep Mississippi Gulf communities up to date on the true threat that is looming off their coast.

One of the more recent incidents that the group has catalogued is the wash up of 43 dead sea turtles along Mississippi’s 70-mile coastline. The Coast Guard and the National Wildlife Federation – which bagged 23 of the turtles for necropsies – have been reluctant to pinpoint the spill as the cause of the deaths.

Coast Guard officials have told Bellona Web that their deaths may be attributable to accidental drownings of the turtles after they were caught in shrimp nets that were laid as part of special early shrimp season that was opened directly after the Deepwater Horizon sinking, and ended last Thursday, allowing fishermen to haul in catches before oil spread. Regular shrimp season opens in June.

But the Gulf Oil Disaster Responders, particularly Skrmetta, have eschewed that notion. He said only 47 shrimp boats worked the special season.

“I’ve never seen a dead sea turtle wash up on shore during a regular shrimp season when there are hundreds of boats out,” he said. “Don’t tell me 47 boats killed 43 sea turtles.”

But he noted that even that count may be way off. “That’s 43 they have found – that’s not counting what might be in the marshlands, which could be hundreds more.”

Skrmetta also has a personal stake in seeking out the truth of the spill and its ramifications – like most of the rest of the Mississippi coast’s businesses. Should oil hit, The National Park Service has the authority to shut down Ship Island, meaning an end to his family business, which has $3 million invested in boats and equipment.

Over the past five years, Skrmetta’s company has carried 30,000 visitors to Ship Island, and that was on the rise before the spill. Before Katrina, the annual rate was 70,000. So, Skrmetta and the rest of the Gulf Oil Disaster Responders will be watching closely on Tuesday and Wednesday as Congress bring the first public lambasting of BP officials involved with the Deepwater Horizon disaster.

“Truth rises to the surface like this stuff in the Mississippi Canyon” the deep undersea trench off Louisiana from which the oil is still flowing, said Skrmetta.