BAYOU LA BATRE/DAUPHIN ISLAND, Alabama – Clifford “Buster” Johnson, skipper of the Roll Tide shrimping boat stationed amid the cattails, water lilies, and weeping moss hanging from the mangrove boughs of the Bayou La Batre, squinted through the patchy sun dapples as his crew unloaded what will likely be his last catch of 2010, a loss that will cost him more than $300,000.

Meanwhile, further south, reports of a dozen oil tar balls rolling up on the beaches of Dauphin Island have turned out to be far more drastic than official estimates, and dead wildlife has begun to follow the tar balls onto shore.

The Roll Tide’s haul after shrimping west of the Mississippi river was 45,000 pounds – not bad considering the brief trawling time, but hardly enough for the crew to meet their $60,000 annual salaries. As the shrimp poured out onto deck from deep freeze, it was apparent the crew would have to hammer out a plan B by morning to survive the summer shrimp season that won’t come to the Gulf this year – and for many after.

Capt. Johnson stared down at his sea weathered galoshes, and wondered aloud if there was even a plan B to consider.

The Roll Tide had just put into its marshy port after the US Coast Guard recalled all fishing boats on the Gulf of Mexico back to their home-ports at 6 pm Sunday. Still groggy from the 48 sleepless hour trip back to Bayou La Batre from the waters west of the Mississippi Delta in Venice, Louisiana, which has already been hit by oil, one of Johnson’s deck hands, Kevin Fitch, said “it’s pay-day – the last one.”

Congress frying fish of its own

Capt. Johnson is 900 miles south of the blame game BP, Halliburton and Transocean were playing on Capital Hill Tuesday and that will continue through Wednesday as BP pointed the finger at Transocean from whom it leased the Deepwater Horizon rig that exploded and sank on April 22nd, leaving a geyser of oil pumping 5,000 barrels a day in to the Gulf of Mexico. Transocean is blaming Halliburton for construction a faulty blowout preventor, which stems oil spills at the source. And BP is being blamed by Transocean and Halliburton for improper handling of he rig.

“Damned politics,” said Capt. Johnson, the leathery skin of his gaunt face permanently tanned from years at sea tightening at the thought. “Ain’t none of them ever been on a boat – they don’t know our problems or how to fix them” he said. “The oil companies are circling the wagons, taking care of their own.”

Capt. Johnson was derisive in recalling BPs efforts to stop the leak thus far. He had watched news reports on BP’s efforts to lower it’s 98 ton iron funnel onto one of three leaks at the exploded drill site on Roll Tide’s satellite TV as it plied through the kerosene scented air south of the spill.

“I call that one the outhouse,” he said, referring to the funnel. “I knew that thing wasn’t going to work as soon as I saw the pictures.”

When the effort indeed failed, BP announced it would try a smaller dome to cap the leak, known by the company as the “top hat.”

“They better be able to pull a rabbit out of that one,” he said, in reference to the age-old magicians’ legerdemain and to the laughter of his crew. “That one I call the ‘chicken coup.’” And the latest stopgap measure BP is considering in something smacking of panic is called a “junk shot” – firing at high pressure debris comprised of golf balls and old tires at the well hole, a plan announced over the weekend by US Coast Guard Admiral Thad Allen.

“Golf balls; Imagine that,” said Johnson, “At least we know where the minds of these executive types are – right out there on the golf course.”

The Roll Tide’s future, if any

Captain Johnson is as suspicious of the flurry of conflicting information on wildlife deaths, BP payouts, the trajectory of the spill, and what, exactly, BP is doing to  stop and clean up the spill as the rest of the ever more frustrated locals.

The far sorer issue for Capt. Johnson was that of money. BP has been announcing compensation packages from the beginning of the spill, but has recently drastically scaled back its projected outlay. For instance, BP yesterday announced that it would pay only for the rehabilitation of animals covered with oil, as oil is considered by the company to be the only calling card that legitimizes wildlife’s victimization by the spill.

It is generally agreed among the environmental and scientific community – even oil friendly local marine biologists at Louisiana State University –  that dispersants leave oil as toxic if not more toxic to the ecosystem.

But BP is relying on language in US Environmental Protection Agency studies saying dispersant use at great depths is inconclusive as its escape hatch from liability, despite extensive independent evidence to the contrary.

BP has also maintained that it will honour “legitimate claims” from fishermen, but has failed to specify the parameters of those terms.

Every single member of the Roll Tide crew has filed a claim for lost wages against BP, but with their uncertain financial futures, fishermen like Hanson have had to turn to relatives in the field of law.

Likewise, many others have turned to a massive proliferation of lawyers who have ramped up TV advertisements for victims of the spill, and even to miniscule law firms in Bayou La Batre that have literally posted hand written paper signs in their windows inviting the local community to file claims against BP’s battle-seasoned litigators through them.

Capt. Johnson spit when asked if BP would be making up the difference in his lost wages.

“How the hell are they ever going to do that?” said Johnson, whose skinny legs were still outfitted in his shrimpers’ galoshes. “It’s not just this season they took from us – we can’t fish these waters for another 10 years, if that.”

Johnson is far from the only person in this part of the world that thinks the oil industry and its cohort in Washington is being less than frank with the public. Forty miles south of the bayou, on Alabama’s Dauphin Island, it was reported Saturday that 12 tar balls – mixtures of oil and chemical dispersants – washed up on the island’s shores.

BP dismissed them as natural phenomena with no connection to their blowout. But reports have nonetheless prompted an enormous round the clock – but, as seen by Bellona Web Tuesday – largely aimless clean-up effort on the island’s beaches. Yet the push at sea has resulted in an attempt to surround the Island with oil booms. 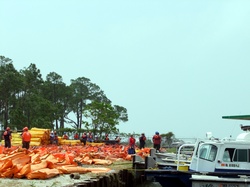 On Friday Megan Broadway, a spokeswoman for the Institute of Marine Mammal Studies in Gulfport Mississippi confirmed that more than 50 sea turtles – all of them threatened or endangered species – had been found washed up on Gulf beaches. But the institute’s director, Dr. Moby Solangi, has repeatedly insisted that the turtles are not related to the spill.

Broadway clarified that only animals brought to the institute covered with oil would be classified as casualties of the BP spill. At the same time, however, BP has dumped 253,000 gallons of toxic Corexit 9500 oil dispersant in Gulf waters – more than oil that has been recovered. Broadway said the institute had been instructed to say results of necropsies on the turtles are “inconclusive” and to not comment on what are still “open investigations.”

Earlier reports from the institute theorized that the turtles had been drowned in shrimp nets. But this notion flabbergasted environmental groups and shrimpers alike. Monday night ended shrimping just west of the Mississippi river – an area that had remained open after the Deepwater Horizon disaster.

Some 47 boats had earlier participated in a special early shrimp season that had opened to the east following the blowout and ended last Thursday.

Local fishermen said the likelihood that 47 boats killed more than 50 sea turtles, which have rarely been seen alive, let alone dead by boatmen who have plied these waters for decades, branded the notion as absurd.

Roll Tide deck hand Dick Hanson, who has worked with Capt. Johnson most of his fishing career at sea, showed Bellona Web Tuesday the vessel’s special nets, called TEDs, which have to be checked regularly by the Coast Guard to make sure turtles can escape from them if caught during trawling. Hanson said the Roll Tide had never captured a turtle that it had let drown in the specialized safety nets. 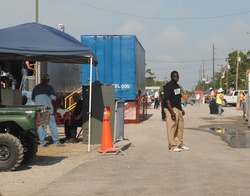 Neither Dr. Solangi nor Broadway was available for comment by press time.

The National Marine Fisheries Service is being less coy about the carcasses of six dolphins it has collected from beaches in Mississippi and Louisiana. None of the dolphins were covered with oil, according animal rescue coordinator Michele Kelley. But the fisheries service is insisting on treating the deaths as related to the spill.

Roll tide to get damages?

As for BP chief Tony Hayward’s assurances that his company would compensate lost business for fishermen, a broadcast Capt. Johnson had seen on the satellite TV of his 94 foot trawler, he said “(Hayward) is lying through his teeth every time he open’s his mouth.”

Capt. Johnson said his small company of three vessels nestled in wilds of the bayou had been approached by BP to help with the clean-up effort, but the pay is less than US minimum wage.

“How are my boy’s going to support their families on that?” said Capt. Johnson, adding that he and his crew would sooner head for the cleaner waters of Texas to trawl for shrimp when the June season begins.

He has good reason to do so, his boat holds 800,000 shrimp “when we stomp the hatches,” he said, meaning packing the boat full.

But going to Texas, a decision he will have to make Tuesday night, means leaving Bayou Labatre – where his house, wife and their three cats live a mere 100 yards from where he docks. The sail back, hugging the coast will be arduous, and as the oil from the Deepwater Horizon explosion spreads, he may be stuck on the other side of the Gulf for an indeterminate amount of time. 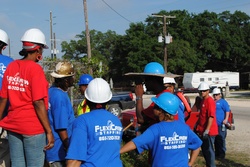 Ecological turmoil and a culture in jeopardy

“This is home, even though we spend 24 days out of the month at sea,” he said. Johnson said he had never been north of the bayou – on land at least – and was born in the bayou’s small hospital, which is now a convenience store, 55 years ago. Growing up in an oyster shop run by his mother, he has been on the decks of trawlers since before he can remember.

“I’m never on flat land long enough to lose my sea legs,” said Capt. Johnson. “There’s no way we’ll be stuck in port and be happy about it.”

The fishermen are proud of their boats and the lore of the salty bayou shrimpers that is so deeply ingrained in the culture of the Gulf. Hanson gave a tour of the complex set of nets and crew quarters and told stories of near misses. Showing a deep scar on his hand, he recalled an incident tracking swordfish years earlier with Capt. Johnson off the east coast. A hook went through the palm of his hand and the barb came out the top, he said, showing the scar.

“What do you do when you are 300 miles from the nearest hospital?” he said. “You cut out the hook, tape up your hand and keep working. You’ve got to have thick skin.”

As Wiley and his guests climb the sand dunes from the beach, he shakes his head in amazement at the dead catfish and the foundering turtle. Initially a doubter that the oil spill would have much impact, he said, “Well, I guess we’ll be eating a lot of pulled pork sandwiches,” another Gulf staple besides seafood.