PASS CHRISTIAN, MS/NEW ORLEANS, LA – While a US House of Representatives probe into the Gulf of Mexico oil spill has revealed numerous and devastating problems with the blowout preventor at the BP well leaking some 210,000 gallons a day, Louisiana’s largest fishery has seen its haul drop by 50 percent, it’s president announced Thursday.

A second day of Congressional hearings in Washington that focussed on the blowout preventer on the BP-drilled well that has been leaking into the Gulf of Mexico for 23 days unabated, revealed, in essence, that blowout preventer’s failure could have averted the disastrous oil slick that officials say will eclipse the Exxon Valdez in volume if the well is not capped.

Meanwhile, Mississsippi’s second highest executive dismissed concerns of citizens who have been labouring under the heat and smell of oil blowing from the south on the Gulf and over land, telling them they were only smelling lawnmowers.

Nothing to fear but lawnmowers

The oil and gas smell over the Gulf, which has been apparent to Bellona Web reporters for three weeks. Yesterday, Mississippi lieutenant Governor Phil Bryant was at a conference in Biloxi were several people complained they ciould smell gas coming in from the Gulf.

“No, you can’t,” was his terse reply. “That is not gasoline coming out of the Gulf, this not the Exxon Valdez.” He said the smell may be coming from people’s lawnmowers. 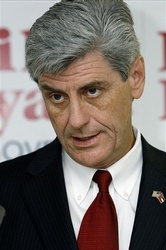 His boss, Gov. Haley Barber, has strong ties to the Washington oil lobby and served from 1993 to 2004 as head of the Republican National Committee, which both supports, and receives support, for big oil.

Francisco Cruz, an Environmental Protection Agency spokesman out of Mobile, Alabama, said that what people are likely smelling are the volatile organic compounds that have evaporated into the air, and he said that these compounds smell like gasoline at the pump. 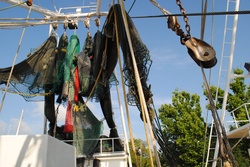 Fishermen in Louisiana were fearing on Thursday that areas west of where the Mississippi river opens into the Gulf may close.  Shrimpers – often from as far away as Alabama, have been trawling these waters as they are west of the oil blowout’s trajectory.

Gregory Holt, president of Daybrook Fisheries, described his company as the “economic generator’ of the region, and said that the spill will cut in half its usual yield. Some small coastal areas off Louisiana have been reopened but Holt and fishermen have acquiesced to the fact that the spill will disrupt fishing – especially for shrimp and oyster boats – for as long 10 years or more while BP continues failed efforts to shut off the flow of oil.

Local reports and data from the National Oceanographic and Atmospheric Administration, however, indicate that the extensive oil contamination along the coast of southern Louisiana may close this area as well.

Few areas aside from this are open and shrimpers, who typically spend 24-28 days a month trawling the seas and bringing in hauls as large as 800,000 pounds.

Currently they are running mere 20 hours trips to the western waters and not bringing back much at that. Some shrimpers as far away as Alabama have been counting on waters west of the Mississippi to eke out a living for the summer season.

Other fishermen look west of the Mississippi for salvation

Clifford “Buster” Jonhson, skipper of the Roll Tide shrimp boat based out of Bayou La Batre, Alabama earlier this week weighed the possibility of faring the often shallow and narrow labyrinth of the intra-coastal waterway to return to trawl off Texas for the rest of the season. 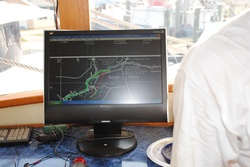 Johnson on Tuesday has just returned with a 45,000 pound catch via the same route after fishing west of the Mississippi before Federal authorities ordered all boats in the Gulf back to their home ports at 6 pm Sunday.

The cost of gas, however, especially when his vessel burns 21 to 45 gallons of it an hour, make the idea unattractive, as does he idea of getting caught west of the slick for an indefinite period of time.

To add insult to injury for fisherman, Congressional hearings on the spill and its three principle industrial culprits – BP, Halliburton, Transocean, which leased the Deepwater Horizon rig to BP and Cameron, which built the blowout preventer – have revealed the gushing leak which has continued unabated from 5,000 feet below the sea for 22 days, could have been prevented.

In hearings yesterday it was revealed that the blowout preventer – meant as a fail safe to oil well spills – had a dead battery in its control pod, leaks in its hydraulic system, a “useless” test version of a key component and a cutting tool that wasn’t strong enough to shear through steel joints in the well pipe and stop the flow of oil.

Documents and testimony from the companies’ executives, Representative Bart Stupak of Michigan said, exposed that the fail safe blowout preventer was anything but, Washington media reported.

In one exchange, Massachussetts Representative Edward J. Markey pressed BP on why it seemed to be “flailing” to deal with a spill only 2 percent as large as what it had said it could handle in its license application.

“The American people expect you to have a response comparable to the Apollo project, not ‘Project Runway,’ ” Markey said on remarks broadcast on C-SPAN, the Congressional television network.

Steven Newman, chief executive of Transocean, responded that the blowout preventer underwent regular tests, and ,said links to the drilling rig would have indicated if the device’s batteries were dead. He said, however, that data records were lost when the rig sank.

It was the second day of congressional hearings in response to the April 20 blowout that set fire to Transocean’s Deepwater Horizon drilling rig, which sank on April 22nd and killed 11. The sunken rig triggered the spill, which now looms off the coast of Gulf States.

In Louisiana 25 birds have been found “oiled” in Louisiana, including seven that survived, said Sharon Taylor of the US Fish and Wildlife Service. She also said 87 sea turtles and six dolphins have been found dead along the coast of the Gulf of Mexico, but added a familiar refrain that lab tests will be needed to determine whether they died from oil or other causes.

Off the Mississippi Coast, on the nature preserve of Ship Island, Bellona Web found an oiled bird on Sunday. 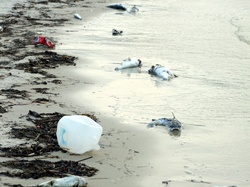 Further east, on Alabama’s Dauphin Island – which made news a few days ago when 12 oil tar balls washed up on its shored – more than 600 catfish counted by Bellona on the beach. Dead catfish are also washing up in Pass Christian, a small fishing and vacation community on the Mississippi coast west of Biloxi, though Bellona Web has seen no tar balls here.

Bellona Web also spoke with Dauphin Island local CW Riley, who had found several dozen tar balls himself. The tar ball episode triggered a version of the D-Day landing of workers from all over the US flown in to scour the Islands beaches.

The Island, normally an idyllic vacation spot, has been surrounded by booms, and hay bales have been placed along the beach to absorb incoming sheen, though the island has not been hit yet and is not expected to be for some days.

Yet Blackhawk helicopters from the Coast Guard and shell oil circle the skies as thickly as marsh mosquitoes.

Locals are confused by workers who have to wear hazmat suits on the beach while they are allowed to frolic barefoot.

“What aren’t they telling us,” said CW Wiley, a Dauphin Island resident with a wry grin.