Chemical dispersants seem to be keeping oil from Gulf shore, but results may range from simply cosmetic to very toxic

PASS CHRISTIAN, Mississippi – The use of chemical oil dispersants in the Gulf of Mexico, which has drawn fire from many environmental quarters, may be helping to destroy the oil slightly faster as well as altering the course of the oil so that it stays in the deep ocean rather than reaching shore.

But many Gulf residents and fishermen also fear that the failure of oil to make landfall, which has been gushing from a hole a mile below the sea unabated since the British Petroleum operated Deepwater Horizon rig exploded on April 22 killing 11, is just the calm before the real storm.

An estimated 2.6 million gallons have escaped into Gulf waters since then, and experts say that if the geyser of crude continues, it will top the Exxon Valdez spill of 11 million gallons in a matter of days or weeks. More than 6,800 square miles of federal fishing areas from the Mississippi River to the Florida Panhandle have been closed for at least 10 days, and tonight marks the end of a special shrimping season.

Meanwhile, one of British Petroleum’s most guarded secrets was revealed today: what kind of dispersant they are using in clean-up efforts. It turns out to be toxic Corexit 9500, as clean-up workers here had earlier told Bellona.

Scientists don’t know much about the oil’s ultimate effect in the deep water, but most agree that it will have a much larger biological effect if it reaches the coast, which is teeming with wildlife. Using booms to corral and burn oil has been difficult because of choppy seas and a dire lack of fire booms in the Gulf.

Today, improved weather aided in boom laying efforts. But air quality, according to the Air Quality Index (AQI), a number used by government agencies to characterize the quality of the air at a given location, is expected to jump tomorrow. Today’s AQI on the Gulf was 100, or moderate. Tomorrow, it is expected to reach above 100, or unhealthy for sensitive groups, according to the US National Oceanic and Atmospheric Administration (NOAA).

It is unclear whether the forecasted downturn in the AQI is a result of oil at sea, disperants, general pollution or a combination of these elements.

The use of chemical dispersants, said Bellona President Frederic Hauge, “is good for the shores, the birds and ecosystems along the shore, but bad for fisheries and fisherman.” Of primary concern since the spill began is keeping oil out of marshlands and estuaries – prime breeding grounds for sea life – the contamination of which would end the livelihoods of tens of thousands of local fishermen.

A National Academy of sciences panel concluded that dispersants have greatly improved in their effect on the environment over the past decade, but much more research needs to be done on the effects of the dispersed petroleum.

Some one third of the world’s supply of dispersants has been mobilized for clean-up in the Gulf, and Hauge said Tuesday new supplies of newer dispersants were being flown in from Norway.

The primary ecological concern associated with dispersants is their ability to enhance the effective toxicity of oil via the dispersion process.  Dispersants are able to enhance the distribution and movement of not just oil fractions, but also its more toxic, soluble, and mobile aromatic components, said an information sheet sent to Bellona Web by Richard Charter, a foremost expert on marine biology and oil spills who is a senior policy advisor for Marine Programmes for Defenders of Wildlife and is chairman of the Gulf of the Farallones National Marine Sanctuary Advisory Council.

Dispersants transfer oil from the water surface into the water column, and while decreasing exposure to oil for surface dwelling organisms, such as seabirds, marine mammals, and sea turtles, it increases the exposure for the water column’s communities of fish, eggs and larvae as well as shrimp, corals and oysters. 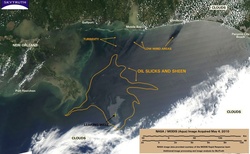 Dispersed oil particles tend to remain in the upper layers of the ocean and as they approach inshore areas, increasingly impact corals, oysters and shrimp.  Dispersed oil particles tend to assume a less visible, more difficult to cleaned-up quality. They also assume pervasive presence in the environment, with increased opportunities for long-term ecological impacts, particularly in coastal areas.

“There is a chemical toxicity to the dispersant compound that in many ways is worse than oil,” said Charter. “It’s a trade off – you’re damned if you do, damned if you don’t –  of trying to minimize the damage coming to shore, but in so doing you may be more seriously damaging the ecosystem offshore,” he said.

The dispersants also make skimming oil off the surface of the water difficult as the balls of oil that form when dispersants are applied can clog skimming mechanisms, said Bellona’s Hauge.

Due to time differences between Norway and the US Gulf Coast, it was not possible by press time to find out if the dispersants arriving from Norway are of the Corexit family, or if they contain 2-butoxyethanol, or 2-BE.

On Saturday, US oil spill expert and author of “Sound Truth and Corporate Myth$: The Legacy of the Exxon Valdez Oil Spill,” Riki Ott, lambasted the use of chemical dispersants to contain the spill in the Gulf.

2-BE is known to cause heath dangers to clean up workers and wildlife alike. Chemical dispersants can concentrate leftover oil toxins in the water, where they can kill fish and migrate great distances.

That Corexit 9500 was being used by BP to disperse the spill was revealed by the dispersant’s manufacturer, Nalco Holding Company of Naperville, Illinois. Nalco’s CEO, Erik Frywald, today expressed his company’s commitment to “helping the people and environment of the Gulf Coast recover as rapidly as possible.”

Corexit 9500 is associated with headaches, vomiting and reproductive problems as sides effects at high doses to clean-up workers. 2-BE has also been documented to cause the breakdown of red blood cells, leading to blood in  urine and feces, and can damage the kidneys, liver, spleen and bone marrow of humans – effects not included on the information sheet for workers.

Hauge yesterday had the opportunity to accompany a group of journalists in a chartered fishing boat to patrol of the waters surrounding Venice, Louisiana –  ground zero for clean-up operations and 50 miles north of the source of the spill.

Hauge said that the water was clear as his vessel sailed in the late afternoon. The boat’s passengers of reporters and observers also alighted on a coastal island populated by pelicans who also seemed to be in good health.

Helicopter air patrols continued above the Gulf to judge the disposition of the spill.

About 100 miles to the east, Bill Groves of Pass Christian, where 12 dead sea turtles washed ashore yesterday, told Bellona Web that the beaches and air seemed clear, though somewhat worse than yesterday.

Awaiting news footage taken from helicopters to be broadcast on the evening news, Groves said that if the Charndeleur Islands, a prime fishing ground, were shown to be surrounded by oil, fisherman would react with dread.

“If you’re local, you know about Crescent Island, and if oil is there, the reaction will be ‘oh, shit,’” he said.

Berms about two to three feet high were being ploughed along Pass Christian’s pristine white sand beaches. Locals speculated that the ploughing could be to limit how far up the beach any eventual oil slicks that arrive may go, or to block from view the wash-up of dead sea animals. A spokesman from BP said he did not know the purpose of the ploughing on the beach in Pass Christian.

The National Wildlife Federation (NWF) and other groups recovered dead sea turtles, jelly fish, birds and fish from the Mississippi gulf coast yesterday and bagged them for necropsies. None of the sea life was covered in oil. When asked if the use of Corexit 9500 may have been to blame for the dead animals, NWF spokeswoman Emily Schatzec said it was too early to tell.

“No direct link can be established,” she told Bellona Web. “It will be weeks before results are in from the necropsies.”

Scientists point to necessity of dispersants

Several eminent scientists have said that the use of dispersants on the spill is a necessary evil.

“You may be creating a toxic environment for fish, but you are preventing it from washing up on shore, which would have a much greater environmental impact. In the case of the gulf…you do everything you can to prevent it from reaching the shore.”

Dispersants need to be used within the first 24 to 48 hours after the oil reaches the surface. Once the petroleum begins weathering and the lighter components evaporate, it becomes much harder to disperse the residue. These factors — weathering and big waves — are two reasons why control efforts at the site of the spill are now focusing on injecting the dispersant directly into the oil at the wellhead.

That approach, however, poses additional problems. Not only does the depth make it difficult, but a large volume of dispersant is required. Typically, a dispersant is added at a concentration of about one part of surfactant to 20 to 40 parts of petroleum, and the BP well is releasing hundreds of thousands of gallons per day.

Yet Chemist Lawrence Duffy of the University of Alaska, who studied the Exxon Valdez spill, thinks the dispersants “are more a public relations measure than a preventive one. It has an effect on our psychology because we don’t see the oil slick,” but the oil is still there.

“It’s better to have it on the surface so you can go ahead and scoop it up,” he said.