NEW YORK – BP has had to halt its ambitious effort to plug its spewing oil well in the Gulf of Mexico on Thursday afternoon when engineers saw that too much of the drilling fluid they were injecting into the well was escaping along with the leaking crude oil, BP sources in Houston said.

A technician at the BP command centre in Houston, Texas confirmed to Bellona Web reports that the pumping of the fluid had to be stopped temporarily while engineers were revising their plans, and that the company hoped to resume pumping by midnight, if federal officials approved.

The technician, who spoke on condition of anonymity because he was not authorized to brief reporters, said the problem was not seen as serious. “We’re still quite optimistic,” he said, but cautioned: “It is not assured and its not a done deal yet. All of this will require some time.”

The news of yet another delay in capping the well came on a day of whiplash invoking developments from Louisiana to Washington.

Coastguard Admiral Thad Allen, who is coordinating efforts to stop the leak from the BP-drilled well in the Gulf of Mexico, said earlier Monday that the BP’s “top kill” effort to plug the gusher were going according to plan.

Meanwhile, US President Barack Obama has defended his embattled government’s handling of the huge oil spill, unveiling a series of measures, including a continued moratorium on drilling permits for six months.

At the same time, experts with the US Geological Survey  said that the flow of oil from the Deepwater Horizon well, which has been gushing since an explosion and fire wrecked a drilling rig in late April, was several times worse than the preliminary estimate by BP, the oil company responsible for the rig and the well.

Speaking at the White House, President Obama  said he was “angry and frustrated” over the spill and vowed to hold BP accountable for the “horrific disaster.” He reiterated that his officials would do everything necessary to protect and restore the coast. The president’s comments came as questions were increasingly being asked about whether he had been sufficiently engaged in handling the disaster,

Obama also suspended test drilling on 33 rigs in the Gulf of Mexico and cancelled the sale of further offshore leases.

This move marks a sharp shift in policy since March, when President Obama gave the go-ahead to widen the scope for offshore drilling in order to reduce dependency on oil imports.

Hours earlier, Obama had extended Elizabeth Birnbaum,
the head of the Minerals Management Service (MMS), the agency which oversees drilling operations and collected the money on drilling leases, the opportunity to work elsewhere in the government, but that she resigned instead. The MMS was already deeply flawed with a revolving door policy between regulators and the oil industry, and the move to push out Birnbaum is seen by many as an effort to halt that corruption

Interior Secretary Ken Salazar, who was Birnbaum’s boss, praised her as “a strong and effective person and leader” and said she “resigned today on her own terms and on her own volition.”

In a joint statement with Salazar, Birnbaum said she was “hopeful that the reforms that the Secretary and the Administration are undertaking will resolve the flaws in the current system that I inherited.”

Prior to taking the helm at MMS, Birnbaum spent most her Washington career as an environmental advocate, working either for the government or nonprofit groups.

Yet, Obama blasted the “scandalously close relationship” between oil companies and regulators, and said officials granting exploration permits would no longer be responsible as well for ensuring safety. Obama said the MMS had been plagued by corruption for years.

The Repower America Website, which runs email liaisons to the public from the White House today aggressively released an underwater video entitled “What BP Doesn’t Want You to See”  by ABC News and Philippe Cousteau Jr., grandson of famous oceanographer and diver Jacques Cousteau.

Cousteau, the chief oceanography correspondent for Planet Green, described what he saw as one of the most horrible things I’ve ever seen underwater.”

Cousteau called the suspended mix of oil and dispersant a ‘nightmare.’

As this developed, fisherman who had signed on with BP, under the condition that they not talk to media, have begun blowing the whistle  on the company for feeling sick from their involvement in the cleanup effort. BP has recalled all 125 cleanup vessels working out of Breton Sound, Louisiana because of the reported illnesses., but would comment no further on the incidents of illness

BP officials debated until early afternoon Wednesday over whether to go ahead with the plan, which involves very slowly pumping drill mud at very high pressures into the well of the spewing leak that has continued for 37 days unabated. They started the top kill procedure at 1:00 p.m. Central Daylight Savings Time Wednesday after two earlier delays on the weekend and Tuesday.

While the operation is showing signs of success, BP is cautious about trumpeting progress too early. BP Chief Operating Officer Doug Suttles said in televised remarks from Robert, Louisiana this morning that “I think we just need to take the next 24 hours and actually see what the results are.”

BP CEO Tony Hayward has been even more cautious, stating publicly that he gives the top kill procedure a 60 to 70 percent chance of actually working – a sign that there is much waiting yet to do. He had been similarly pessimistic about prior effort to kill the leak.

“While we’re very encouraged by some aspects of this procedure, I don’t want to express optimism until I know for sure that we’ve secured the well and the leak has stopped,” she told reporters.

The top kill measure will proceed to pump about 65 barrels per minute of drill mud into the well until it is evident the oil has stopped flowing or that some is still escaping into already heavily hit Gulf waters. If that works, BP will then inject cement into the well to seal it. The top kill has been used above ground but has never before been tried 5,000 feet beneath the sea.

The small successes that are being evidenced by the top kill measure come as the US Geological Survey’s Dr. Marcia McNutt says the gulf spill has already far exceeded that 1989 Exxon Valdez catastrophe, which dumped 11 million gallons of oil in Prince William Sound, Alaska, as well as the official 5,000 barrels, or 210,000 gallons daily estimated to be volcanoing into the gulf daily.

According to McNutt, two teams from her agency using different methods for measuring the volume of oil in the gulf concluded in preliminary results that between 17 million and 39 million gallons have spilled so far at a daily rate of 500,0000 gallons a day.

This begins to corroborate higher estimates given to Bellona Web by Dr. Ian MacDonald, an oceanographer form Florida State University, who told Bellona Web on May 1st the leak looked like it was closer to 26,000 barrels, or 1.09 million gallons a day.

Steven Wereley, a professor from Purdue University in Louisiana told a congressional panel Sunday that his estimates were closer to 75,000 barrles a day from the primary leak and another 20,000 barrels from a secondary leak, for a grand total of 3.7 million gallons a day.

BP’s own efforts to siphon some of the oil from the broken pipe to weeks ago also crashed through official figures when they reported that the siphon was collecting some 5,000 barrels a day, while underwater video showed the oil plume still gushing.

Adding to the mounting woes are illnesses turning up in fishermen who have been taking part in the cleanup effort; problems that will not go away when of if the top kill procedure succeeds.

A number of fishermen helping BP in the cleanup effort who signed contracts that forbid them from talking to the press. Perhaps for that reason, reports of illnesses have been somewhat slow to emerge. Last week, the wives of some of the fishermen spoke out publicly about the symptoms their husbands were experiencing. This week, some fishermen are starting to come forward.

In an interview with New Orleans’ WDSU TV, fisherman  Gus Burris reported on May 21 feeling drugged, disoriented, tingling, fatigued, and also reporting shortness of breath and cough. These are symptoms that are consistent with what one might expect from exposure to hydrocarbons in oil, environmentalists who have been watching BP’s liberal use of the dispersant Corexit 9500 have said.

Gary Burris, a fisherman in coastal Louisiana, has become severely ill from inhaling fumes during response work following the Deepwater Horizon disaster and claims many more have become sick but hesitate to come.

There are also disturbing photos that have been posted on the internet and in The Los Angeles Times, showing clean-up workers on beaches in regular street clothes without even the benefit of gloves.

These people are in contact with the weathered oil  – as opposed to fresh oil bubbling up from the continuing leak. Weathered oil is considered less dangerous than fresh oil because the toxic vapors have dissipated, but it is not benign.

Other cleanup workers are reporting cases of debilitating headaches, burning eyes and nausea, and some industry and public officials are pointing the finger at chemical dispersants as the cause.

WDSU reported on its morning news programme that nine fishermen are recovering from feeling ill while helping clean the oil spill, citing officials in Louisiana’s Plaquemines Parish, one of the hardest hit areas along the 100 miles that have washed onto shore and into marshlands along Louisiana’s coast.

Plaquemines Parish spokesman Kurt Fromherz told Bellona Web this morning the fishermen became sick after coming in contact with dispersant being used to break up the oil.

“No other personnel are reporting symptoms, but we are taking this action as an extreme safeguard,” said Coast Guard Chief Petty Officer Robinson Cox, the assistant safety officer at Incident Command Post Houma, in a telephone interview Wednesday.

Yet, many other fishermen who realize that cleanup work will be their only source of income for this summer at most are likely not stepping forward to report their maladies.

The situation echoes that of fishemen who helped clean up the Exxon Valdez spill in Alaska in 1989, where the same form of dispersant was used, said Riki Ott, an oil spill expert. In her book “Sound Truth and Corporate Myth$: The Legacy of the Exxon Valdez Oil Spill,” Ott catalogues the lethal effect of using chemical dispersants on workers who cleaned up that spill. Many of these workers died while Exxon dragged out their court cases.

Bellona Web was one of the first news outlets to question the use of dispersants, and one of its reporters and one of its contributors became ill with the same symptoms the fishermen described while covering the story in the Gulf, but have since fully recovered.

BP has hardly been forthcoming about events surrounding the spill. Fishing boats it contracts are forbidden to carry media. Last week, a vessel carrying a CBS news crew was turned away under threat of arrest by a Coast Guard captain carrying a boat full of BP employees. The captain of the vessel said to CBS’s rolling cameras that, “This is BP’s rules, not ours.”

Bellona Web’s own efforts to document sites where National Park Service officials and state environmental workers had indicated tar balls, dead animals and sheen were in evidence were thwarted by representatives of Shell, BP, and the Louisiana Coast Guard. While visiting Grand Isle, where tar balls the size of footballs were washing up on shore, a woman sitting at the “BP Information Centre” at the local community centre had Bellona Web reporters thrown out by police for approaching her for comment. 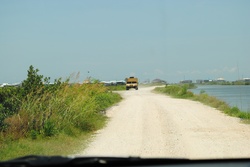 is that BP wants to control their exposure to the press.”