NEW YORK – BP’s renewed attempts to plug the geyser of oil at its unbridled well in the Gulf of Mexico were halted again on Friday when the company stopped pumping operations for the third time in three days, a technician involved in the “top kill” effort told Bellona Web. 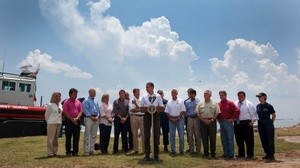 Another technician told the New York Times that today’s pumping suspension represents the second time the operation was halted.

But Doug Suttles, BP’s chief operating officer, said in interviews late last night that the top kill effort had already been stopped and started twice since the process began on Wednesday, meaning today’s stoppage would represent the third.

The news of yet another shut down in the progress of the top kill , and ambiguity about how many have occurred, comes as President Obama, who is touring the affected area today, promised to triple the cleanup manpower in the region.

In that newscast, Suttles told ABC, in a point reiterated by many BP and Coast Guard officials that, ”We’ve had periods of pumping followed by periods of monitoring – I think the key element here is patience.”

He added the junk shot and top kill efforts would continue for 24 to 48 hours. But how many of those hours will be taken up by actual pumping and halting pumping for monitoring are unknown.

But Suttles suggestion of patience is something many are tired of hearing, especially amid releases of contradictory information about how the top kill is proceeding, how long it will take, if it is in fact working and whether or not the video image the public is watching from the BP camera at the bottom of the sea are, in fact, real.

Today’s suspension of the top kill effort was not announced, and appeared again to contradict statements by company and government officials that suggested the top kill procedure was progressing Friday.

On ABC’s “Good Morning America” on Friday, Coast Guard Admiral Thad Allen said the top kill effort was continuing, and that BP engineers had been able “to push the hydrocarbons and the oil down with the mud.”

Adm. Allen, who is overseeing the response effort for the government, told ABC that the next 12 to 18 hours are “very critical” as BP attempts to build up enough mud to be able to ease up the pumping in order to backfill the well with a concrete cap.

In a series of TV interviews this morning, BP CEO Tony Hayward said that the procedure was operating “according to plan,” but that it would be another 48 hours before BP knew whether it worked. He reiterated that the effort has a 60 to 70 percent chance of working.

After these rosy morning reports were contradicted by the Times report and other technicians who were interviewed by email by Bellona Web, BP and federal officials moved up a media briefing on the operations that had been scheduled for this evening by more than an hour.

Yet, as of 7:30 p.m. EDT, no mention of the suspension of the top kill had been posted on the Deepwater Horizon response website’s news feed, BP’s primary interface with the public.

At issue for observers of the top kill procedure is the concern is that the well could simply blow again, potentially shooting out more oil than before.

The technician working on the effort who is in contact with the Times  told the paper late Friday that despite the injections at various pressure levels, engineers had been able to keep less than 10 percent of the injection fluids inside the stack of pipes above the well.

“I won’t say progress was zero, but I don’t know if we can round up enough mud to make it work,” the technician told the Times. “Everyone is disappointed at this time.” 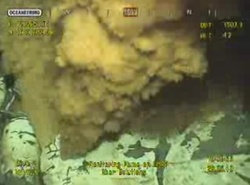 He said that it was barely an improvement on Wednesday’s results when the operation began and was suspended after 11 hours. BP resumed the pumping effort Thursday evening for about 10 more hours. But the operation was again shut down at 2:30 a.m. after the two junk shots had been attempted.

A BP spokesman told reporters that, “the operation is by definition a series of phases of pumping mud and shooting bridging materials and junk and reading pressure gauges. It is going to keep going, perhaps 48 more hours.”

When BP started its “top kill” operation Wednesday afternoon, company executives said they would know whether the efforts to pump heavyweight mud into the wellbore were suppressing the flow of leaking oil and gas by today at the latest.

But the stoppages in the top kill procedure have scuttled those plans, and the public has remained in the dark about BP’s effort for at least a combined 18 hours since Thursday morning. Added to that is the loss of one of the BP cameras that simulcasts the blowout and lack progress to fix it.

According to BP spokesman John Pack who was interview last night, the camera lens that was focused on the bottom of the blowout protecter became fouled with mud.

Pack insisted that the loss of the camera was not intended to obscure public access to viewing operations: “It’s just operational. The camera that was closest to the riser got mud on its lens,” he said

Are the junk shots junk?

In the operation known as the “junk shot,” BP engineers poured pieces of rubber, golf balls and other materials into the failed blowout preventer early today in an attempt to close the supposed failsafe device that sits at the top of the well head at the ocean floor.

The junk shot was meant to be undertaken in conjunction with the continuing top kill maneuvers that pump heavy drilling liquids and drill mud into the well in the hopes of counteracting the pressure of the rising oil.

If this is accomplished, BP officials intend to pump cement into the well and seal it for good.

But Bellona President Frederic Hauge, who has been keeping a close eye on BP’s closed circuit monitors of the spill on the internet said Frday afternoon that “there has been a noticeable shift in the intensity of what is spewing from the blowout preventer.”

“Much of the volume you see coming out of the well in the last 36 hours is mud,” Tony Hayward, BP’s chief executive told ABC earlier today.

This shift in intensity seems to have occurred around 12:50 p.m,. EDT in the United States. Hauge interpreted the increase in mud, oil and drilling fluids spewing from the well as an indication that the junk shot and top kill efforts are not enough to keep the pressure of the oil down.

“It is frightening to watch because it may mean that we are looking at a second blowout,” he said.

If the top kill and junk shots fail, BP officials planned to try again to place a containment vessel over the leak, which might allow them to capture the oil but would not stop the leak. A previous attempt failed.

Shut down could dampen Obama’s trip

Word that the top kill had been suspended came as President Obama, accompanied by Adm. Allen, toured the region effected by the largest oil spill in United States history. Obama walked along a beach dotted with balls of tar in Port Fourchon, Louisiana, and met with the parish president, Charlotte Randolph, and with the governors of Alabama, Florida and Louisiana.

In Grand Isle, Louisiana, Obama said that “we don’t know the outcome of the highly complex top kill procedure,” and added that if it was ultimately unsuccessful, experts were ready to intervene with alternative manoeuvres.

Standing on the beach with state and local officials,  Obama called the spill “an assault on our shores, the people, our regional economy.”

“This isn’t just a mess that we’ve got to mop up; people are watching their livelihoods wash up on the beach. This is our top priority” he said.

“The buck stops with me. I ultimately take responsibility for solving this crisis,” he said, reiterating a point he made yesterday at a White House news conference.

“This is a man-made catastrophe that’s still evolving,” he said. Not every decision “is going to be right the first time out” and Obama said he expects there will continue to be frustration and anger until the situation is resolved.

Obama sought to reassure area residents that “you are not alone, you will not be abandoned, not left behind.” He added that even after the news media tired of the story, “we are on your side, and we will see this through.”

“This is a man-made catastrophe that’s still evolving,” he said. Not every decision “is going to be right the first time out” and Obama said he expects there will continue to be frustration and anger until the situation is resolved.

When the Deepwater Horizon exploded on April 20, three Norwegian vessels –  Boa Sub C, Ocean Intervention III and Skandi Neptune – were in proximity, reported the daily Dagbladet, and were among the first to join the rescue effort.

The crews of the Norwegian vessel were among the first eyewitnesses of what transpired in the hours immediately following the disaster and BP and the US Coast Guard’s efforts to underplay the extent of the spill, They spoke  to Dagbladet on the condition of anonymity.

“BP drove a directly propagandistic campaing of lies,” said one of the Norwegian boatmen.

After trying to help shut down the well, the Norwegian vessels tried to assist in efforts to map the seabed, debris and the position of the leak. The Norwegian crews said that images taken by remote controlled mini submarines at 5,000 below the sea showed a completely different reality than that described by BP and the Coast Guard.

The crews images showed that enormous amounts of oil were escaping and had the images been made public immediately, BP may have been able to coordinate the kind of help needed to cap a leak of that size. And the crews told the Dagbladet they were looking at far more than BP’s initial estimate of 1,000 barrels or the Coast Guard’s official figures of 5,000 barrels.

“Absolutely everyone could see that there were large amounts of flowing out,” said one of the Norwegian crewmembers. “The only thing we disagreed about was how much more was flowing out than what BP and the Coast Guard, were saying.”

The crew members went even further and told Dagbladet that it was impossible that BP and the Coast Guard were simply making erroneous calculations.

‘They must have known that the leak was much bigger than what was said. (The coverup) is BP’s doing and I cannot believe that they had experts that were looking at the same thing as us,” said another crewmember.

It was yesterday confirmed by Dr. Marcia McNutt of the US Geological Survey that the volume of the spill is in the region of 17 million gallons to 39 million gallons, but the comments of the Norwegian sailors nonetheless point out that BP and the US Coast Guard were from very early stages satisfied to publicize and abide  spill figures for 38 days that could not possibly have been true.

US Coast Guard officials and spokesmen for BP on Friday refused to comment on the allegations raised by Dagbladet.