NEW YORK – US President Barack Obama has arrived in Louisiana to view first-hand the damage wrought by what is said to be the largest oil spill in US history, while BP’s chief executive officer publicly upgraded his earlier assessment of the spill from “moderate” to an “environmental catastrophe.” 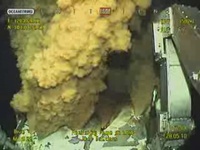 The procedure involved shooting debris such as shredded rubber tires, golf balls and similar objects into the blowout preventer with drill mud in an attempt to clog it and stop the leak. The goal of the junk shot is to force-feed the preventer, the device that failed when the disaster unfolded, until it becomes so choked that the oil stops flowing or slows to a relative trickle.

“Clearly, while we’re pumping mud there is no oil and gas coming into the sea,” Hayward said. A live video feed from the ocean floor showed a thick brown stream gushing into the water. That material was almost all nontoxic, water-based mud – not oil – he said.

If the mud works in stopping the flow, BP can then pour cement to seal the well for good.

“Clearly I’m as anxious as everyone in America is to get this thing done,” Mr Hayward said.

He said the outcome as to whether the mud and the junk shot would stop the leak would not be clear for another 48 hours – the usual timeframe given for any BP attempt to plug the well.

US officials noted Friday that it is crucial that the well be sealed post haste as the Gulf’s hurricane season begins on June 1st, a hurricane season meteorologists are saying could be one of the worst on record.

Scientists’ assessments outline nightmare scenarios should a hurricane pass over the gulf, which is now a liquid suspension of oil, dispersants and oil plumes reaching 20 miles long.

After touching down midmorning at Louis Armstrong Airport in New Orleans Obama is touring a beach with Coast Guard Admiral Thad Allen and visiting with local officials. Obama’s visit comes a day after a White House news conference where he asserted responsibility over the spill. The trip was designed to demonstrate his engagement.

Obama’s visit comes as his administration has been criticized for its response to the massive underwater gusher that is now estimated to be twice the size of the Exxon Valdez disaster.

This is his second to the Gulf since the Deepwater Horizon rig exploded.

He will tour affected areas to try to reassure Americans he remains in charge of the clean-up operation, White House officials said Friday morning.

Obama departed from the airport by helicopter. First, Obama and Adm Allen are to inspect a beach guarded by a protective boom, the White House said.

Then the president is to a US Coast Guard station in Grand Isle, Louisiana, where he will meet Louisiana Governor Bobby Jindal, Florida Governor Charlie Crist, Louisiana Senators Mary Landrieu and David Vitter and others. Notably absent from the group is Mississippi Governor Haley Barbour, who has denied since the explosion that Mississippi’s coast was in any danger.

No oil was visible over Louisiana’s bayou’s as Obama travelled first to Port Fourchon, 30 miles west of Grand Isle. But the view changed when he touched down. According to officials travelling with him, a shirtsleeved Obama walked to the water’s edge with Allen, who explained what he was seeing.

The beach, sealed off in crime scene style yellow tape, is one of Louisiana’s few sandy stretches on Louisiana’s coast. He called White House press pool reporters closer to observe the tar balls washing up on the beach.

The thick crude oil has already permeated more than 70  to 1000 miles of Louisiana’s coastline, threatening fragile wetlands and putting the vital fishing industry at risk.

New estimates from the US Geological survey said at least 12,000 barrels (504,000 gallons) were leaking into the Gulf every day, far exceeding the 1989 Exxon Valdez disaster.

Speaking at the White House on Thursday, President Obama vowed to hold BP accountable for the “horrific disaster”.

He stressed that his administration, and not BP, was in charge.

But he admitted the government did not have the technology to deal with the damaged oil well, meaning that Washington must rely on BP. He has suggested that in future there might be teams and equipment ready to deal with a deep water leak paid for by oil companies but under US government control.

In a shake-up of the offshore oil industry, Mr Obama suspended test drilling on 33 rigs in the Gulf of Mexico, as well as halting exploratory deepwater drilling for another six months.

In addition, he cancelled the sale of some offshore leases off the coasts of Alaska and Virginia, a drastic shift in policy since March, when President Obama gave the go-ahead to widen the scope for offshore drilling in order to reduce dependency on oil imports.

Birnbaum and the MMS have come under fire from lawmakers over lax oversight of drilling operations.

The president blasted the “scandalously close relationship” between oil companies and regulators, and said officials granting exploration permits would no longer be responsible as well for ensuring safety.

The US government on Thursday approved part of an ambitious plan to build barrier islands to stop oil from coming ashore in Louisiana – a request Jinal had been begging for since the beginning of the month, and was not approved until Jindal said his state would undertake the efforts itself. By that time, oil had pushed 12 miles into Louisiana’s bayous.