Massive waves split one Russian oil tanker in half during a fierce storm Sunday, spilling at least 560,000 gallons of fuel oil into a strait leading to the Black Sea, and sank one other oil tanker and two freighters that were anchored nearby in the worst environmental disaster in the region in years.

Published on November 13, 2007 by Charles Digges 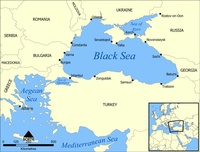 While Russian continues to pursue superpower status by trading its oil reserves on the skyrocketing market, the number of oil spills, pipeline bursts and crude-soaked permafrost field and shorelines continue to bear the brunt of Moscow’s expansion plans at as alarmingly rising rate.

“This event again confirms the absolute imperfection of the technology and the danger of oil and gas industry activity – and most importantly, this event shows how terrible the results can be not only for the environment but living people as well,” said Bellona-Murmansk energy project coordinator Nina Lesikhina.

“It is specifically the residents of the region who will have to deal with the results of the spill. Experts say that this catastrophe shows the complete inadequacy of warning systems and reaction time to emergencies. It is as yet unknown if it will be possible to restore the ecosystem and how much effort, how many means and how much time this will take.”

As reports continue to flow from the area of this most recent spill, the gravity of the spill is bound to grow – possibly to as much as 1.7 million gallons in the worst-case scenario.

Eighteen-foot waves sank the vessels in the Strait of Kerch connecting the Black Sea to the smaller Sea of Azov to the northeast. Initial reports from Russia’s Interfax news agency said the Volgoneft-139, which was carrying some 400,000 tons, or 1.3 million gallons of crude and was split in half by the rough seas had shed 120,000 tons of its load in the storm. Later, the tanker Volnogorsk, carrying 200,000 tons – 650,000 gallons – of crude on board sank.

The 13 crew members of the Volgoneft-139 were rescued, emergency authorities said.

The roiling seas also sank two Russian freighters nearby, in the Strait of Kerch, a narrow passage linking the Black Sea and the smaller Sea of Azov to the northeast. Eight sailors from one freighter were missing, but rescuers saved all the crew members on the other freighter.

Two other tankers also ran aground nearby, but reports indicate that no spills were suffered as a result, said Sergei Petrov, a spokesman for the regional branch of Russia’s Emergency Situations Ministry in a telephone interview. A Turkish freighter, Ziya Kos, also ran aground, he said.

The two Russian freighters that sank were together carrying about 7,150 tons of sulfur, said Petrov.

In total, as many as 10 ships sank or ran aground in the Strait of Kerch and in the nearby area of the Black Sea, and reports said three other sailors were dead or missing, Petrov said.

Underplaying the news
Initial reports from Interfax failed to give the whole picture of the gravity of the spill and it was not until later that in the day that environmental officials began to discuss the full scope of the disaster.

Russian environmentalist and co-chairman of the group Ecodefence! Vladimir Slivyak said that, given Russian authorities propensity for underplaying disasters, there was no reason to believe the entire load of the Volgoneft-139 had not spilled.

"There is serious concern that the spill will continue," Oleg Mitvol, the head of the state environmental safety watchdog agency Rosprirodnadzor, said on Vesti 24 television. He said it would take "several years" to clean the spill.

But Mitvol also said the crude was contained in hermetically sealed containers, and said the real problem would be recovering the fuel oil from the tankers.

But Slivyak challenged the notion that any effort would be made to recover oil products that sank to the bottom of the sea.

“Oil products having toxic properties will be collected probably only on the surface,” he wrote in Bellona Web’s Russian pages.

“And that which will coat the bottom – there is a hight potential they will just forget about that. And it is pointless to hope for a rapid liquidation of the spills results. Anyone who wants to fish these waters in the upcoming years will find oil on them. The catastrophe may affect the inhabitants of the coastal zones – animals and birds, some of which may be wiped out.”

Later reports indicated the Volganeft-139 was stranded several miles from shore. Stormy weather was preventing emergency workers from collecting the spilled oil, which was sinking to the seabed, authorities said.

Vesti 24 also reported the sinking of a Russian freighter carrying metal near the port of Sevastopol on Ukraine’s Crimean Peninsula. Two members of its 16-man crew drowned and one was missing, the report said.

Slivyak laid the blame for the drum beat of bad news at the feet of the Russian authorities.

“The results of these shipwrecks will be felt for years at minimum. How many million dollars will have to be spent to clean it up is unknown,” he wrote. “But it is totally apparent that the responsibility for this is the government’s, who allowed ships that woud split in half in a storm to be used.”