MURMANSK – Igor Senin, former deputy mayor of the closed military city of Zaozersk in Russia’s northern Murmansk Region was yesterday sentenced to three years hard labour in a labor camp for plotting to blow up an oil tanker in the Kola Gulf on the Barents Sea.

Published on November 15, 2007 by Anna Kireeva, translated by Charles Digges 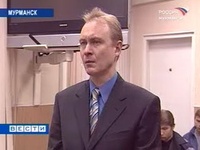 The sentence came in the middle of a week during which Russia has been wearied by oil spills following the sinking and leaking of two oil tankers during a storm on the Black Sea, one of the country’s most popular vacation retreats and home to the 2014 Winter Olympic Games.

A pale and downcast Senin had confessed to his preparations to blow up the tanker Treyder, belonging to the Tangroil concern, and was depending on the leniency of the court in his evident exhaustion. One of his hearings had been postponed as a result of sharp heart pains Senin had experienced.

Over the course of the trial –which was conducted without a jury – Senin refused to comment on his case to Bellona Web or other media, saying only: “all the same, you will all lie.”

Assistant District Attorney for the Murmansk Region, Elena Makarevich, said during the prosecution’s presentations that: “If the deputy Mayor of Zaozersk had conceived to blow up the tanker in the gulf, it would have lead to an ecological catastrophe.”

Makarevich was referring to expert testimony delivered by scientists with the Murmansk Maritime Biology Institute (MMBI).

MMBI scientists determined that the oil slick resulting from the planned explosion would have reached Murmansk within a half an hour.

The court proceedings revealed that Senin, while still deputy mayor of Zaozersk made the acquaintance of shipping entrepreneur Zurab Musinyan, whose company dealt with oil shipping to the Port of Kandalashka on the White Sea off Northwest Russia. Musinyan is said to have complained to Senin that: “the local administration would not permit his company to operate in the year round warm waters of the Kola Gulf, preferring his competition to him.”

To change this situation, Musinyan proposed Senin arrange for an explosion aboard one of the tankers owned by Musinyan’s competitors, which would lead to an oil spill.

“Musinyan guaranteed to focus the thorough attention of environmentalists and the press on the accident,” Makarevich read from the case materials.

Pressured by threats
During the trial, Senin confessed, and explained his actions as the result of pressure put on him by Musinyan and agreed to arrange the explosion only out of fear for the life of his family and close friends. At the same time, Senin was promised a large cash payments and a top managerial position at Musinyan’s firm in Moscow for carrying out the sabotage.

Senin’s lawyer, Vladimir Vechorkin said the former deputy mayor had never planned to create an environmental catastrophe, to say nothing of killing anyone. It was assumed that one tank of oil would be blown up on one tanker, leading to a small-scale localised oil slick.

Senin was charged under Russia’s conspiracy to commit terrorism laws and for carrying a concealed weapon – a search of his apartment turned up five ammunition clips to a Kalashnikov, which Senin said he discovered on the street in town.

In assembling her accusation, Makarevich demanded a guilty verdict and pushed for a three year and three month custodial sentence in a labour camp.

Senin’s lawyer argued that he should be charged with intent to destrory property. He argued that property destruction is considered a mid level crime and criminal punishment should only be applied to premeditation of grievous crimes, such as terrorism.

Despondent plea ignored
In his final statement to the court, Senin requested the court’s leniency.

In conclusion to his emotional statement, Senin gave his court his word as a reserve officer that he would never break the law again.

Murmank’s regional judge ruled against reassigning the charges to the lesser ones argued for by Senin’s lawyer and found Senin guilty on both counts levied against him, and sentenced him according to the prosecution’s request.

According to Senin’s lawyer, neither he nor his client will be appealing the decision.