NEW YORK – In an expedition reminiscent of the last century’s race to the North Pole, a Russian expedition plowing through the polar ice intends to lay a territorial claim to the vast underwater oil and gas fields along the Arctic’s Lomonosov Ridge.

Published on August 1, 2007 by Charles Digges 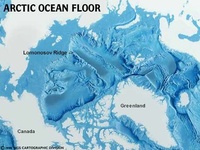 On Wednesday, the convoy, comprised of the Russian nuclear ice-breaker Rossiya and the Russian research vessel Akademic Fyodorov were some 72 kilometers from the North Pole, and members of an advance party flew by helicopter to the pole spent some 11 minutes on the ice scouting the ice breaker’s route, according to the government owned Russian news agecy ITAR-Tass.

The convoy is expected to reach the pole late Wednesday. Once there, Russian scientists plan to dive in two mini-submarines beneath the pole to more than 3.5 kilometres deep, and drop a metal capsule containing the Russian flag and a message to posterity on the seabed.

The mission is also expected to set up atmospheric measurement posts in the Arctic to gauge the effects of global warming – a phenomenon that Russian officialdom is ambivalent about combating, even though it is a signatory of the Kyoto Protocol. Many economic and trade circles in Moscow see global warming not as a threat but a welcome boon to open Arctic Sea shipping and more use of Russia’s northern ice-bound ports.

The symbolic Arctic mission, along with geologic data being gathered by expedition scientists, is intended to prop up Moscow’s claims to more than 460,000 square miles of the Arctic shelf – which by some estimates may contain 10 billion tons of oil and gas deposits.

Mission to lay claim to underwater regions
The voyage, led by noted polar explorer and Russian legislator Artur Chilingarov, is part of the Kremlin’s effort to buttress its claims under international agreements to a large portion of the northern polar region.

The scouting of hard to reach arctic oil and gas deposits has been an obsession of the Kremlin for nearly the past two years. The Shtokman field, off the north coast of Russia and Norway has been a site of special interest and controversy.

While Russia has a territorial claim to that area, and many other hard to explore Arctic sites, it does not have the technical savvy to actually work these fields. The Russians have therefore attracted the participation of international oil companies, such as British Petrolium, Royal Dutch Shell and Norwegian giant Statoil to supply sophisticated equipment in exchange for drilling rights.

Russia’s Arctic oil and gas obsession
But Russia has proven to be a fickle partner in these ventures, as witness the Royal Dutch Shell fiasco last year. The company had been promised almost unlimited drilling rights in the far east Russian region of Sakhalin. As the project neared success, however, Moscow found Royal Dutch Shell in violation of a little observed environmental law.

The end result was that Royal Dutch Shell – which had done all of the preliminary speculation and brought in all of the sophisticated equipment necessary to work the ice-bound field – was forced to capitulate to Russia’s insistence that the oil giant cede all but 30 percent of its drilling rights to Russia.

The move gave many international oil giants pause, and as evidenced by the current and unprecedented expedition, Moscow is now going it alone to reveal the theoretical riches of the Arctic oil fields.

Search for Arctic resources highly political
While the Kremlin has stressed the current expedition has scientific aims, its main intention is to help expand both Russia’s energy reserves and its global political clout.

"There’s no question that this particular expedition does have some kind of larger political and economic focus," Rose Gottemoeller, director of the Moscow Carnegie Center, said.

The expedition reflects an intense rivalry between Russia, the United States, Canada and other nations whose shores face the northern polar ocean for the Arctic’s icebound riches.

About 100 scientists aboard the Akademik Fyodorov are looking for evidence that the Lomonosov Ridge – a 1,995 kilometre underwater mountain range that crosses the polar region – is a geologic extension of Russia, and therefore can be claimed by Russia under the UN Convention on the Law of the Sea.

In addition to dropping a titanium tube containing the Russian flag and a time capsule message, the subs will collect specimens of Arctic flora and fauna and videotape the dives.

The biggest challenge, scientists say, will be for the mini-sub crews to return to their original point of departure and avoid being trapped under a thick ice crust.

Denmark hopes to prove that the Lomonosov Ridge is an extension of the Danish territory of Greenland, not Russia. Canada, meanwhile, plans to spend $7 billion to build and operate up to eight Arctic patrol ships in a bid to help protect its sovereignty.

US Congress is considering an $8.7 billion budget reauthorization bill for the US Coast Guard that includes $100 million to operate and maintain the nation’s three existing polar icebreakers, AP reported. The bill also authorizes the Coast Guard to construct two new vessels.