A cargo ship containing 585 tonnes of bunkers oil and 72 tons of diesel oil, wrecked outside Fedje on the Norwegian west coast, Friday evening. The environmental effects, and in particular the effects on seabirds are severe. 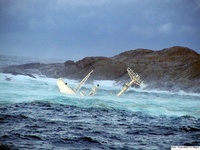 "So far we have established that the emergency preparedness has obvious weaknesses, but there is less oil on the seashore than we first feared," say Konrad Pütz and Jack Herheim, Bellona co-workers who are now in Fedje, outside of Bergen.

The Cypriot ship M/S Server was on its way to Murmansk and without cargo when it ran aground at 6.30 pm, Friday on January 12th. So far 290 tones of bunker oil has leaked out of the ship which broke into two pieces shortly after the impact. The shipwreck is now barely visible.

"We have observed a great number of injured and dead seabirds, although not much oil has drifted ashore," say Pütz and Herheim of Bellona.

Birds that have had even the slightest contact with oil will eventually die because of it.

So far 440 birds with injuries have been found, but many more are expected to appear once the weather allows searching in the areas closer to the actual shipwreck.

First now, two days after the accident, the equipment for cleaning up the oil spill arrives at the little island. The Norwegian legislators voted to move a large depot of equipment from this exact spot just two years ago.

Due to the weather conditions oil removal from the bays on the island has been nearly impossible. On Saturday however, there was a slight decrease in the storm and local forces managed to gather some oil. Unfortunately, there was no equipment to suck the oil from the bay, and when the storm increased again the locals were forced to see the oil leak right back into the sea after spending hours collecting it. 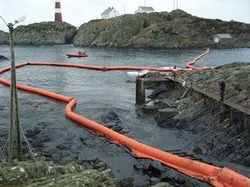 The storm in the area is reported to be calming slightly, and not much can be done before the weather improves.

The weather has also had a more positive effect; due to the strong wind, many of the oil-slicks have dissolved at open sea, hence causing less damage than if they had drifted ashore.

The M/S Server has been accused for not carrying enough dead freight and therefore compromising the handling of the ship. The captain has dismissed these accusations, but it is clear that he was not able to control the ship in the strong wind. The Norwegian newspaper Bergens Tidende writes:

“… at times the propeller was not even in the water and this led to reduced motor power and eventually a crash.”

No matter the cause of the wreck, this incident has triggered a large debate in Norway concerning oil-spill preparedness. What if this had been a supertanker carrying 3000 times as much oil as the M/S Server?

“…Regardless of what parties are governing Norway, the oil-spill preparedness policies have always had one focus: How little emergency preparedness and response can we manage with—instead of considering how we can make the best possible contingency plan for oil spills, if we really try.”