Published on March 20, 2006 by Anna Kireeva, translated by Charles Digges 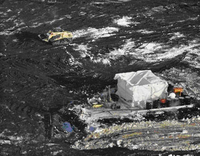 Oily spots where noticed in early March, but the scale of the accident is only recently being ascertained and could grow considerable by the time the final figures are in.

”There have been two spills recently due to corrosion of the feeder pipelines on Alaska’s North Slope. The larger spill was more than 200,000 gallons 760,000 litres. We still don’t know the size of the smaller spill,” said John Devens, executive director the Prince William Sound Regional Citizens’ Advisory Council.

Devens was previously the mayor of Valdez, in southern Alaska when the infamous Exxon Valdez set sail from the Valdez oil terminal and collided with a reef in 1989, leading to the most serious oil spill and ecological catastrophe at sea on record.

According to researchers, the consequences of the Exxon Valdez spill sharply reduced the population of native fish life, including pink salmon, and the restoration of a range of sensitive ecosystem will take at least 30 years. A jury forced Exxon to pay $4.5 billion in compensation plus interest from 1996. However, the case is still hung up in appeals, the result being that Exxon has still not paid anything as a result of the court decision. 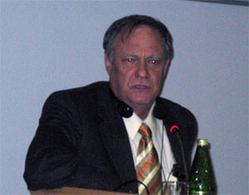 Devens noted that, at the time, the foot-dragging response to the accident by Exxon led Valdez residents to think they had been cheated by the oil-giant. But literate societal action and pressure on the city administration force the oil company to make a number of concessions. Directly following the Valdez accident, the Citizens’ Advisory Council was created, which directed the actions of the oil companies. The Council is financed by money earmarked for the purpose by oil companies operating in Alaska.

Devins said that the pipeline on which this most recent accident occurred is already 30 years old.

“The lines are 30 years old and cause us concern about what else is going wrong with the system,” he said.

Many observers say that the pipeline spill and the Exxon Valdez crisis, the two worst oil accidents to happen in the Arctic Region, cast a very poor light on the Bush Administration’s plans to expand pipelines in Alaska and to drill the Alaskan National Wildlife Preservation.

The reasons behind the accident
According to local officials, the source of the current pipeline leak was a tear caused by internal corrosion in the pipeline, which is operated by the Alaskan office of British Petroleum (BP).

The pipeline has a series of special leak detectors. But despite the elaborate system, no one can as yet pin-point the time that the spill began. It was only discovered on March 2nd, after which the pipeline was shut down and the leak repaired.

BP will carry out an investigation during which it will determine if the leak detection system was working properly when the leak arose.

“We still have a lot of work ahead of us,” said Dan Larson of BP to American news agencies.

The scale of the leak
According to environmentalists’ calculations, crude oil is covering a hectare of snowy tundra.

“I can confirm that this is the largest spill of crude oil on the northern slope of Alaska of all that we have recorded,” Linda Giguere of Alaska’s Environmental Department told the associated press.

Her calculations on the scale of the spill are based on measurements taken only a few days after the accident around the spot of the rupture on the pipeline, she said.

As the region where the spill took place is thinly populated, there is little risk to residents. The accident took place along the Northern coast of Alaska, some 1,040 kilometres north of Anchorage, Alaska’s most populous city.

The main problem caused by the accident is the damage done to an enormous feeding territory for birds and other animals that will now have to migrate from the accident site.

Cleaning up the accident
Accident liquidators are currently working on the site of the spill, but the clean-up is dependent on weather conditions. Strong chills and ice make the oil thicker, which spreads its diffusion over an even larger area.

The liquidators have a set goal of gathering at least 90 percent of the spilled crude, according to BP’s Larson.