MURMANSK—Murmansk authorities joined by Norwegian oil and gas giant Statoil have fixed a protocol to set up a laboratory for studying the content and properties of oil to further technical, economic and ecological cooperation in drilling and cleaning spills in the fragile Arctic seas, officials said. 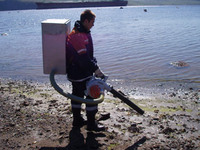 The announcement was made mid-February during a seminar on oil spill clean-up organized by the Murmansk government Region and Statoil, which was held in the context of the Memorandum of Mutual Understanding in Technical and Economic Issues that both parties signed.

Forecast for the Northwest sector of the Arctic
Nikolai Bichuk, Chairman of the Murmansk Regional Committee on Natural Resources and Environmental Protection, presented his forecast for the Northwest sector of the Russian Arctic. He said that the volume of oil transport will increase from 20 to 50 million tonnes per year by 2010. In addition, there is an expected increase in the amount of geological work to be carried out in the region. Bichuk also said that the exploitation of the Shtokman and Prirazlomny oilfields will start by 2010.

The Murmansk government is pinning its hopes on the idea that exploration of the Arctic Shelf will lead to social and economic improvements in the region. According to Bichuk, Arctic exploitation should result in additional tax revenue, new investments, less dependence on equipment and high technologies from outside the region, employment opportunities and an improved quality of life overall.

At the same time, the local government has made efforts to strengthen ecological safety in the region. It has worked out and approved a project on oil spill clean-up in the Northwest sector of the Arctic, particularly the basin of the Barents and White Seas. This area is serviced by the Murmansk Basin Emergency Management agency, which regularly conducts training on clean-up techniques for emergency containment teams.

Bichuk also stressed that there exists a need to improve international communication, emergency forecasts, and methods to deal with contamination of seawater that would result from drilling and spills.

The first challenge, according to Kristoffersen, will be to hammer out environmental safety standards and technologies that will enable companies to achieve zero level emissions. Emission requirements are currently quite high, but they should be even higher, he said. He suggested that it is necessary to create technologies for environmental monitoring and utilisation of ballast waters.

The second serious issue is a lack of environmental knowledge about the Northwest Arctic region. Kristoffersen said it is essential to create a foundation for future research and to conduct further exploration.

The representative of Statoil stressed the importance of close cooperation between Russia and Norway in the Barents Sea and thinks the countries should work together.

Statoil wants the island of Spitzbergen to be the major centre for Arctic research. The company already runs a laboratory on the island, and hopes Russian specialists will participate in the research.

Among other important issues are emergency clean-up methods and establishment of good relations with local populations and fishermen, who are the backbone of the local economy.

Dealing with emergencies
It is well known that only the governments of the countries who have experienced severe accidents have invested in cleanup equipment and development of oil spill cleaning technologies.

According to Tor Kristian Sletner of the Norwegian Coastguard, Norway has managed to avoid serious oil spills despite a long history of oil production. He said that Norwegian authorities wish to cooperate with the Russian government in order to work out a uniform approach to provide environmental safety at sea, and to reach an agreement on how to approach oil spill issues.

But despite that good news, it was Sletner’s opinion that the fewer the number of accidents, the smaller the interest of governments in investing funding in oil spill elimination equipment. Today, few companies are eager to invest money into such equipment. Therefore, it is that much more important that authorities supply financial aid for their development.

“We are in the same boat, in the same region and oil spills do not obey borders,” said Sletner, adding that the cooperation of both authorities and industry is of the utmost importance.

Oil clean-up in icy conditions
Norway is conducting research on oil behavior in different weather conditions. To apply a correct oil spill clean-up method, it is important to know the content of the particular oil.

At present, several concepts exist regarding oil behavior in icy conditions. Experts offer drastically different solutions: burning the oil, drifting the contaminated ice away and conducting clean-up procedures in the open sea or, on the contrary, breaking the ice and gathering the oil from the surface.

Beginning in the late 1980s, Norwegian experts carried out an elaborate research project to learn about oil behavior and the change of its properties in icy conditions. As a part of their experiment, in 1993, they spilled 27 square metres of oil between two large blocks of ice. During 10 days, the specialists monitored the state of the ice, the behavior of the oil on and under the ice, and analyzed results daily.

This was the biggest experiment of its kind in Norway, and possibly in the world. It was conducted on the border of an ice formation between the islands of Medvezhij and Nadezhdy off the northern coast of Norway.

Ice’s impact on oil
At the end of the experiment, the experts surmised that the usual analysis and usual means of emergency reaction for standard spills are not efficient in cold conditions. This can be explained first by the fact that ice affects manoeuverability, efficiency and the operational mode of skimmers and booms that are used in typical clean-up procedures. For instance, while backing off the ice in order to gather oil with a skimmer, the oil film thins such that the equipment gathers only pure water.

Second, ice stops the roughness of the sea, and this also affects oil behavior. Big obstacles in the Arctic are low temperatures, polar nights, remoteness of human settlements and a low level of infrastructure. Polar nights, for instance, make it difficult to find oil spills. Low temperatures cause oil to lose its fluidity.

It is difficult to predict the behavior of oil spills in icy conditions. The concept of the vibration method, for example, forces ice under the water, and the result is that the oil rises to the surface. This technology, though, needs serious revision, experts say.

Troubleshooting
The participants in the seminar believe that, in order to provide environmental safety in Arctic conditions, it is important to solve a number of existing problems and revise a number of current assumptions.

First of all there is a necessity to redesign and adjust oil booms, skimmers and other equipment used for oil clean-up in icy conditions. It is important to improve means used for spill clean-up, to study possibilities of chemical dispersant use, and to further deepen knowledge on oil behavior in icy conditions.

All the seminar participants agreed on the fact that it is important to know how to make good use of the equipment and recommend regular training sessions.