Russian Minister of Foreign Affairs Sergei Lavrov announced after talks with his Norwegian counterpart Jonas Gahr Store that his government would adopt Norwegian standards to develop the oil and gas-rich underwater fields in the Russian sector of the Barents Sea.

Published on November 11, 2005 by Charles Digges

The close partnership will benefit the Russian government, which does not have the technology necessary to develop underwater fields harsh Arctic conditions , and has put many of them—particularly the Shtokman Field north east of Murmansk, out for lease. Currently five oil companies, including two from Norway, are contending for drilling rights in the Russian Arctic.

But the project, if it moves ahead before Russia puts the proper legislation in place could land Norways leading oil and gas firms in very hot legal water.

What Legislation?
As it currently stands, Russia has no legislation or regulation for developing underwater fields and is relying on the guidelines it does have for onshore gas and oil development. But creating legislation for underwater drilling is not likely on the Russian agenda, and will not be for some time to come.

But according to Bellonas Alexander Nikitin, who heads the Environment and Rights Center, Bellona in St. Petersburg, the entire process depends on the financial and political exigencies of the Russian government.

The absence of a law governing underwater drilling is not a hurdle, to developing the Shtokman field, he said in a telephone interview.

But even then, said Nikitin, ramrodding an 11th hour bill through the Russian Parliament is hardly necessary. Instead, semi-legal temporary norms can be drawn up to facilitate the progress of drilling the Shtokman field.

Only if there is some absolute necessity to make an actual law will a bill be drafted, said Nikitin.

I think Lavrov will move ahead with the Shtokman project regardless of whether there is legislation or not.

This leaves Hydro and Statoil in a tight spot. If their Russian partners assure them the project conforms to Russian law by burying them in a pile false assurances and the temporary norms Nikitin mentioned, the companies will have to weigh their excitement over their multi-million dollar expansion projects against whether they want to be part of illegal test drilling in the Shtokman field. 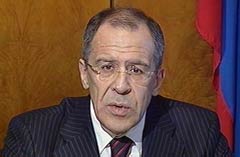 Nonetheless, an excited Lavrov declared that Norwegian businesses have 30-35 years experience with oil and gas extraction. They have technology that is foremost in the world, said Lavrov, according to Norways daily Aftenposten. He underscored that Norways Hydro and Statoil would be central partners in drilling the Shtokman field.

We will not have two environmental standards in the Barents Sea, he said, in a signal that the Russians will follow Norwegian regulations for environmental safety.

Technological Hurdles
But according to many Russian and Norwegian observers, drilling Shtokman is not as simple as Lavrov makes it sound, and his spokesmen at the Ministry of Foreign Affairs in Moscow told Bellona Web by telephone that, although there is no clear date set for the beginning of test drilling, it will likely be set soon. He had no comment on any legislation that would have to be hammered out before development in the Shtokman field begins.

But the race to develop is on.

Norwegian firms have a clear interest in developing the Shtokman fields as soon as possible, and test boring was to begin this year, but was set back because equipment purchased from Russia was insufficient to the task.

Indeed, in Bellonas opinion, it will be some 10 to 15 years before the Shtokman field can be legally and technologically developed.

Bellona to observe the developments
Bellona therefore urges Hydro and Statoil to hold themselves in check until proper legislation is drafted and passed by Russia. Otherwise, they will be contravening the laws of the country that is hosting their activities, and besmirching with avarice and poor practice the reputation of their own country.

Bellona will continue to monitor the situation and leverage Norways oil majors to abide by the letter of Russian law.