MURMANSK—Given the virtual lack of a nature protection system on the part of the state, the development of the oil and gas industry is causing alarm among environmental NGOs. 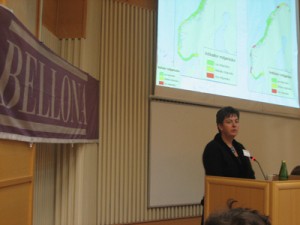 Oil and gas-condensate extraction and transportation firms have caused huge environmental problems around the world that have often led to ecological catastrophes.

The fact remains that the governments of most countries tighten environmental conservation demands, set up environmental insurance funds and amend legislation that affects oil companies only after a catastrophe happens—after a tanker has an accident, a pipeline bursts, or an oil train jumps the rails.

Only when a country or a region within such a country has to deal on its own with the consequences of an accident does it stop looking at oil companies—the guilty parties in the accident—as a regional economic donor and starts to take the environmental demands of civil society seriously. This happened, for example, in Alaska and Spain. Will the same happen in Russia?

The Arctic Shelf
From 2008 to 2010 active hydrocarbon extraction is forecasted for the Arctic shelf. Various estimates put the volumes of oil to be transported along northern sea routes at around 20 million tonnes per year.

In recent years, significant hopes for giving an economic boost to the Russian part of the Barents Sea region have been linked to extraction and transport of oil, as well as possible extraction of gas condensate. However, oil and gas development in the region is taking place in Arctic conditions, where the ecosystem is extremely fragile: It could take a very long time  up to several generations  to restore it in the event of a mishap.

The Northern Coalition
In 2003, NGOs in Murmansk and the Murmansk Region joined together to form the Northern Coalition. At present, the Coalition includes the organisations Gaia, Bellona Murmansk, the Kola Nature Conservation Centre, the Barents Sea office of WWF Russia, and Nature and Youth.

The aim of the Northern Coalition is to minimise environmental risks and damage during development of the oil and gas industry, and to optimise sustainable development of the region. To achieve these goals, the Northern Coalition has initiated an annual conference to serve as a platform for negotiations between various parts of society  regional government, oil and gas companies, the local population, and environmentalists.

The Northern Coalition has already organised two conferences dedicated to problems in the oil and gas sector. At the first conference in 2003, problems of extraction and transport of raw fossil fuels in Northwest Russia were discussed, and possible ways to solve them proposed. The second conference, dedicated to transportation of raw hydrocarbons through ports on the White Sea, took place in 2004.

The conference aimed to create a platform for discussion of common interests, municipal problems and experience, and the search for possible ways to minimise environmental and economic damages and optimal sustainable development of the region.

Conference participants agreed on the necessity to create an integrated system to oversee economic activity in the Western Arctic, for which it is essential to develop and carry out a strategic ecological assessments of planned and implemented economic activity in the region. All conference participants noted that oil and gas development plans in the North Atlantic are subject to broad public debate.

The Kaliningrad Region Experience
Participants were briefed on the positive and negative experiences of civil society elsewhere in Russia, including Sakhalin and Kaliningrad, when dealing with the oil industry regarding observation of environmental norms and rules and distribution of revenues received from companies’ activity.

Andrei Ozharovsky, a researcher for the environmental group Ekozashchita!, reported on the first experience of holding a referendum on ecological issues in Russia. Recently, the construction of two oil trans-shipment terminals was planned in a residential zone in the town of Svetly in the Kaliningrad Region. The planned trans-shipment volumes of 200,000 to 800,000 tonnes were set to run just 200 metres from peoples’ homes.

After the first public hearings, at which the local population voted against construction of the terminals, second hearings were held, the results of which were falsified.

As a result, an initiative group—with the broad backing of the population and against the municipal authorities—declared its intentions to hold a referendum, as only in this way could the issue be resolved in favour of the region’s residents. Under Russian legislation, a referendum is the direct expression of the people’s will, and the results are binding.

Under Russian legislation, a referendum is considered valid if the turnout is 50 percent plus one voter of those eligible to cast a ballot. Such a turnout has only rarely been registered for any vote at either the federal or regional level in Russia.

For the first time I saw people queuing up at polling stations in order to vote, Ozharovsky told Bellona Web. The electoral commission simply could not deal with the numbers of people when things got really busy, and people stood patiently in line for 10 to 20 minutes to vote.

Unfortunately, the referendum fell some 300 votes short of the number required for it to be considered valid, but the voting results spoke for themselves: 98 percent of voters voted against the construction of the oil terminals. The local authority and the oil industry will have to take this into account, at least while the construction plans are being revived.

Since 1968—virtually since oil was discovered in Prudhoe Bay—civilian environmentalists have demanded transport safety guarantees, double-hulled tankers, tugboats, and the creation of a specialist service to deal with spillage.

These demands met deaf ears for 21 years, until the Exxon Valdez disaster. After the accident, the Council was formed, and to this day has a broad remit to deal with reducing pollution during oil transport. The Council checks, reviews, and comments on government rules and regulations, as well as contingency plans drawn up by oil companies.

In addition, the Council keeps civil society informed about companies’ ability to react to oil spills, about measures to prevent spillage, and about the effect of terminals and tankers on the local environment.

As well as taxes from transport companies going to the state budget, every resident of Alaska, regardless of age, receives an annual cheque from the government, Devens told Bellona Web. Last year this annual pay-out came to $2,000, and this year it was just over $1,000.

According to Devens, no one is insured against accidents. But for local residents and civilian environmentalists, it is important that the local population receive some benefits from oil prospecting and extraction on their territory. It is also important that the oil industry be seen as following through on its promises and taking responsibility for its actions.

Visiting the Belokamenka Tanker
After the official events finished, a number of conference participants travelled to the Belokamenka Anchored Conveying Complex (ACC), located in the Kola Gulf. This tanker is one of the largest in the world, displacing some 360,000 tons. It is 340 meters long, and 65 meters wide.