Published on September 13, 2005 by Anna Kireeva, translated by Charles Digges 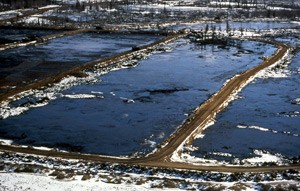 The Russian Ministry of Emergency services has established this. And in the opinion of the majority of ecologists, official data on spills is significantly deflated compared to actual figures.

The statement was remarkable in that a government authority had called into question official figures regarding the amount of oil that is spilled each year in Russia.

The economic benefits of oil extraction and transport in the Russian regions are well known. As soon as authorities consider building a new pipeline in a given area, for example, or discuss an increase in the volume of oil transport, conversation among local residents turns toward the profits their region will reap.

Benefits also come in the form of new jobs and a spike in the economic growth of a given region. The only unpleasant topic is the negative consequences of such development—potential risks to the environment, possible accidents, and, most importantly, who, how and whose money will eliminate the consequences of such accidents.

According to RBC, experts estimate that during oil extraction and transportation some 3-7 percent of all extracted oil is lost. Environmentalists insist that the real volume of oil pollution is kept secret. But even their most modest calculations indicate some 10 to 20 million tonnes of oil is spilled annually.

Vladimir Slivyak, co-chairman of the environmental group Ecodefence! told Bellona Web that official statistics are for a fact significantly lowered. The reason lies in the tight relationship between the powers that be and the oil business.

Finding the spillers
Among the difficulties of eliminating the consequences of an oil spill, said Mitvol, are that not all responsible parties know exactly what to do when an accident occurs. According to Mitvol, if an accident takes place in a large organisation, then large-scale efforts to liquidate it are undertaken at the cost of the company.

In practice, though, it is more complicated. The search for the guilty parties in a spill who are to finance reclamation operations are more often than not fruitless. Water currents and wind make it practically impossible to establish the source of contamination, and there is little time to undertake such investigations.

In contrast to other countries, Russia does not have regular air patrols of waters, which helps establish what ship may have had a spill. Specialists think that monitoring vessels is ineffective. Data from satellites is not always reliable because they cannot hold a constant regime of observation. A possible solution is monitoring from helicopters, but this is an expensive prospect.

Representatives of Lukoil, one of Russias oil majors, told Bellona that avoiding spills is extremely difficult. The last serious accident, according to Lukoil, happened in April 2003 in the Perm Region of the Ural Mountains. The result of the leak was a pipeline, which leaked 150 cubic meters of black oil into the soil. The company took all possible measures to liquidate the spill, representatives said. The company took the environmental rehabilitation of the area entirely upon itself, and Lukoil spent 41 million roubles on the six-month operation.

According to Mitvol, Rosprirodnazor does not have official statistics that would help evaluate the scale of leak and spillage problems in Russia. Environmental pollution by oil products is tied to numerous violations of environmental protection legislation governing the overloading and transport of oil, and unsanctioned tears along pipelines. Frequently, spills occur during overloads of oil products for rail and sea transport. A significant volume of oil products end up in the water as a result of tanker cistern cleaning.

It happens often that an enterprise that has had a leak of oil products does not inform the concerned government agencies about the event, said Mitvol.

The Arkhangelsk leak of 2003
Irrefutable evidence of this is the accident in the Onezhsky Gulf in the White Sea on September 1st 2003. Ore-bulk oil tanker 57 run by Volgotanker shed 50 tonnes of black late that night and the captain ordered the ship to continue on its course. Even the company itself did not report the accident.

When on September 5th 2003 Alexander Shishlovsky, an transport investigator, arrived from Arkangelsk, there was no longer any evidence to look at—the ship had left the scene, and the black oil of the M-100 type had sunk to the ocean floor.

A few days later, the tides began to wash it up. More than 30 kilometers of shore were covered by lumps of various waste and stuck to sea foul in the area. Hundreds of dead birds had to be burned as a consequence. The fishing villages of Lyamtsa and Purnema were hauling oil coated herring and other oil waste out of the sea in their nets. On September 10, the operation to gather the waste in bags began.

The long and tedious search for the guilty oil company began. Volgotanker categorically denied their guilt. But investigators fixed blame on the company. It was stripped of its licence and assessed a fine of 12m roubles. But the company appealed the fine and refused to pay the local region. The company did pay its 12,000 rouble navigation fee for the area, however.

The Tver accident
The latest spill occurred in the Tver Region northwest of Moscow when an oil loading train crashed and spilled some 300 tonnes of oil products. Many experts called the accident a catastrophe of national proportions. The Russian hydro-meteorological centre provided data that the nearby Vazuza River was showing an extremely high levels of black oil water contamination, exceeding the allowable concentration of oil products in the water by 100 times.

The Tver Region plans to seek compensation on the order of several million roubles from the Russian Railway. It is precisely this company that the regional administration says bears the blame for the catastrophe, and is pursuing the matter in court. But Russian Railway representatives insist that the accident occurred due to erosion of rail lines under the purview of the Oktyabrskaya Railway.

According to Mitvol, who visited the accident site, it was the responsibility of the oil transporter—Russian Railway—to supply pumps and absorbing agents.

Instead of this, the companys management decided to restore the rail lines, he said.
However, in accordance with ecological law, Russian Railway was required to undertake the liquidation of the accident. Mitvol told the Regnum news agency.

Solving the Problem
By Russian environmental law, all work related to cleaning up an ecological incident lies at the feet of the company who caused the incident. But the black oil spill in the Tver Region only cleaned surface oil. That oil which sank into the ground or coated the bottom of the Vazuza river remained. At present, no one is dealing with this problem, and the administration of the Tver Region does not have the means to pay anyone to do so.

Mitvol sees the way out of the current situation in the creation of a federal agency for environmental defence that will investigate cases of pollution.

His solution is the creation of a federal agency for environmental defence, which would investigate not only oil, but all work improving the condition of the environment, according to RBC Daily. At present, we only have a service for oversight, but that is just oversight. An agency that has people and special equipment, financing—that is something else entirely.

Leading environmentalists call for independent oversight
But such an initiative raised doubt among some ecologists. Slivyak said that the initiative is not only half baked, but half way from being half baked.

I dont understand what the creation of a new federal agency will accomplish—what is needed is a totally independent body that has nothing to do with the Ministry of Natural Recources.

Alexander Nikitin, who heads Bellonas St. Petersburg office, also gave low marks to the notion of creating a new federal agency among those that already exists.

Experience shows that the more big services there are that have overlapping mandates, the more confusion and corresponding inefficiency you have in these services, Nikitin said.

Nikitin added that creating another government agency would inflate an already bloated bureaucracy.

And to say that these two organisations work effectively together is wrong. If the majority of spills go unnoticed, it raised the question—which way are these services looking.