The Eirik Raude stopped by weather

Bad weather has apparently hindered the progress of the Eirik Raude oil rig out of Ølenfjord and yesterday evening, it lay in the same place it had 24 hours earlier. It is assumed, however, that efforts to move the rig will resume today if the weather conditions clear.

Published on November 13, 2004 by Hanne Bakke, translated by Charles Digges 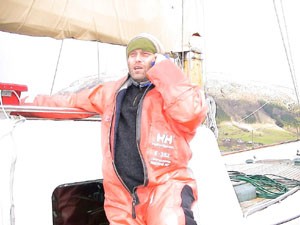 In this event, the rig will depart from the WestCon piers to the Troll Channel where it will bore a well for the Hydro oil company and then continue north to the Barents Sea were it will bore one well for Hydro and the other form the Statoil oil company.

Bellona and the Nature and Youth organisation established a protest camp on October 18th to underscore that the Eirik Raude, a mobile search and drill rig, must not get permission to drill for oil in the Barents Sea. Bellonas environmental patrol boat, the Kallinika has been moored at pier along side the Eirik Raude since then.

Both Bellona President Frederic Hauge and Nature and Youth Director Ane Hansdatter Kismul have been on board the Eirik Raude for inspections.

The environmental camp has become been in the environmental limelight, and has received visits from the Socialist Left Partys Hallgeir Langeland, among others. While at the camp, Langeland reiterated his support for the groups efforts and confirms his position against oil drilling in the Arctic North. 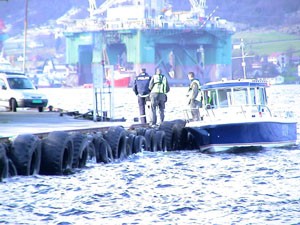 Groups unite to prevent rigs departure
Bellona and Nature and Youths intend to make sure the Eirik Raudes cannot depart for the Barents Sea without before an environmental impact study is thoroughly elucidated. The presence of the protest camp and Bellonas environmental patrols are a part of the environmental movements work over the last decade to oppose oil drilling in the Arctic North.

That the rig is headed for the Barents Sea now means that decision makers have just four to six weeks, including Christmas holidays, to deal with the situation. Hauge said that the Hydro oil company is putting totally unacceptable pressure on decision makers with this construction.

Bellona and Nature and Youth have take all formal measures to stop the search and drill rig in the Barents Sea and have continued to pursue all avenues since pitching camp in Ølen.

As of today, they are still on hand in Ølenfjord to attempt to block any progress the weather could not.

Final preparations underway for rigs departure
It was busy on the Eirik Raude yesterday as final preparations were made for the rigs departure from Olenfjord along the planned heading through the Troll Channel and further into the Barents Sea.

Statoil should only take the rig out in the event of a good weather forecasts. But the weather has been anything but favorable, and wind among other things have complicated efforts to move the drilling rig over the past few days.

The first improvement in the departure operation came the day before yesterday when the rig lay some meters out from WestCons piers, where it had been laid up for upgrades. The level of activity on and around the rig has increased in the last 72 hours, and Friday afternoon a police boat was dispatched to Ølen to attend the rigs departure.

Authorities keeping a close eye on environmentalists
This police boat had been moored next to the rig all day, aside from a few forays to take photographs of Bellonas Kallinika. Yesterday, matters seemed even more serious when a police boat accompanied by a Coast Guard vessel arrived to check the integrity of the security around the Eirik Raude. The Coast Guard vessel is now pulled up alongside the environmentalists protest camp.

Around 15:30 local time yesterday, activity around the rig seemed to die down, indicating that workers had perhaps given up their efforts to get the rig off on its way for the time being.

Bellona and Nature and youth find it wholly unacceptable that the boring rig is being moved prior to the deadline date set for public complaints. We have been robbed of technical and democratic possibilities to influence the conclusion, a battle-ready Fredric Hauge told Bellona Web.