ST. PETERSBURG  Severe environmental repercussions are still being felt in the Nenets Autonomous Region, or NAR, about 1200 kilometres northeast of Moscow, where an oil pipeline blowout last week resulted in a 150-cubic-metre spill that has already heavily contaminated local water sources. 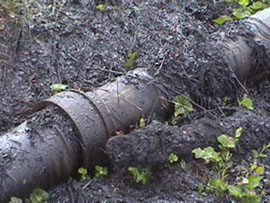 This latest pipeline leak caps a month of an unprecedented number of pipeline accidents, oil residue runoffs, and near misses with oil tankers in Russia. On June 26th, a Russian oil tanker loaded with 100,000 tonnes of oil drifted dangerously close to Norways northern coast after its engine failed, threatening to shed its load against rocks in the Barents Seaa potential catastrophe, which could have destroyed an untold amount of fragile arctic ecosystems. The engine was eventually repaired and the straying ship continued on course. But it was a dangerous reminder of the Russian oil industrys ills.

The most recent pipeline spillwhich experts chalk up to contractors relying on cheap and outdated equipmentwas reported to the NAR regional department of the Ministry of Civil Defence and Emergency Situations by a citizen of a small village called Khorei-Ver, who said that a 10-kilometre slick of oil was spreading into the Kolva River from the Sandivei River.

Experts from both emergency agencies flew to the sparse tundra of the region to confirm the spill and discovered that the source of the black oil pollution was the 150-millimetre-wide Musyurshor-Sandivei oil pipeline that delivers oil from oil well No. 60 at the Musyurshor oilfield. Both the oilfield and the pipeline are owned by Severnoye Siyaniye Ltd., which barely made any effort to help control the contamination and contain the leak.

Sergei Fyodorov, head of the NAR Natural Resources Departmentwhich is a branch of the emergency situations ministrydeclared the situation an emergency. He said the regions environment had suffered severe damage. Although Fyodorov was unable to put a concrete figure on how much cleanup and environmental rehabilitation will cost, he told Bellona Web that it will reach into the millions of rubles. 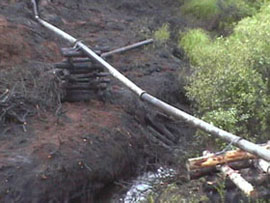 The river at this point is some 180 to 200 metres wide, and during the first six hours of cleaning work, more than 21 cubic metres of black oil had been removed from the river surface.

By Tuesday, some 120 cubic meters of polluted water had been removed from the site of the pipeline blowout, the NAR press service told Bellona Web. Water samples from the polluted area have been sent to a laboratory in St. Petersburg. Results concerning contamination levels are expected in about a month.

According to preliminary data from emergency officials, the spill resulted from negligence by Severnoye Siyaniye, the pipelines owner, who, officials say, disregarded safety measures and poorly monitored the condition of the pipeline. Another strike against Severnoye Siyaniye is that, until emergency experts had examined the damage, the oil firms officials hadnt made any effort to localise the spill, or clean and decontaminate the affected area, the NAR press service told Bellona Web. Severnoye Siyaniye also did not inform the responsible government agencies that the spill had taken place, said the press service.

Despite several calls, officials from Severnoye Siyaniye could not be reached for comment.

Yury Padalka, chief of the NAR administration, signed a resolution creating an executive-level task force to deal with the consequences of the spill. The task force will consist of representatives of the emergency situations ministry, the regional administration, and local environmental and law enforcement organisations.

Accidents Along Russias Oil Pipelines
Russia is second only to the United States in sheer length of oil pipelines. In Russia, the combined length of mainline pipelines exceeds 240,000 kilometres. When pipelines on oil fields are added to that figure, Russia has some 550,000 kilometres worth of oil conduits running through its territory.

The recent history of accidents along this flowing highway, however, is not encouraging.

One July 14th, an oil pipeline in Saratov, in southwestern Russia, was breached when a bulldozer pierced it. This is a common accident, but 7.2 cubic metres of oil spilled onto the ground and polluted some 0.6 hectares of land.

A day before, an oil spill was discovered at the 406th kilometre of the Kuibyshev-Lisichansk pipeline near Novaya Ternovka, a village in the Engelsk district of the Saratov region. This leak was attributed to oil poachers, who shoot, cut, or drill holes in pipelines and collect the leakage to sell.

The number of such poaching leaks has grown recently in all Russian regions. In all, according to environmental statistics, 60 to 70 percent of pipeline accidents in Russia are due to poaching attempts, pipeline deterioration, or neglect of scheduled maintenance. This is a contrast to oil accident statistics for the United States, which indicate that the most frequent causes of oil pipeline breaches there are earthquakes, landslides and digging operations near pipelines.

Previous to the Novaya Ternovka poaching incident, about 60 tonnes of oil spilled on July 9th at a location 30 kilometres from Grozny, the capital of Russias war-torn Republic of Chechnya where, according to media and experts, a significant share of the oil poaching takes place. According to preliminary environmental information, the cause of the accident was metal deterioration on the pipeline. This incident polluted seven hectares of land, including 15 homes and the farms that surrounded them.

The leakage situation has become especially acute with pipelines located on oilfieldslike the pipeline that burst at the Musyurshor field. The engineering lifetime of such pipelineswhich are intended for short-term useis four to five years, and their slipshod construction virtually guarantees rust and breakage. Mainline pipelines are in somewhat better condition, but the number of leaks and accidents on them is growing.

The main reason for this is that pipeline construction companies cut corners to save money and avoid using newer and safer technologies, which are widely available. These newer technologies come from the West and are only used on any given pipelines most important points so that contractors can save money by using the substandard material for the rest of the line.