How the gas lobby is making electricity grids irrelevant

Gas today is almost entirely of fossil origin. “Natural” gas is only natural to the extent that coal is natural. The new garbled language has been produced to confuse everybody.

Published on February 28, 2020 by Bellona Europa 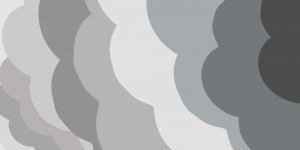 Gas today is almost entirely of fossil origin. “Natural” gas is only natural to the extent that coal is natural. The new garbled language has been produced to confuse everybody.

Every 2 years, the European Network Transmission Operators for both Gas (ENTSO-G) and Electricity (ENTSO-E) are required to publish their Ten-Year Network Development Plans (TYNDP). This year, as in 2018, the ENTSOs have decided to publish their plans collectively, under the ambiguous concept of “sector coupling”. The result is unsurprisingly pro-gas, with a much diminished role for electrification.

The gas lobby is more powerful than the electricity lobby

ENTSO-G and ENTSO-E are responsible for coordinating gas and electricity transmission networks in Europe. The distinction makes sense conceptually if the purpose is to ensure proper coordination when it comes to energy policy. But in practice, some companies are present in both organisations and the financial weight of gas over electricity means the jointly-developed TYNDP is heavily biased towards gas infrastructure. That means decisions appear to be made in favour of expanding gas infrastructure, with little consideration for other factors or solutions. Most of the ‘benefits’ of sector coupling are solutions to problems which can be fixed in other more efficient ways.

The gas sector expects to hoard cheap and curtailed electricity

For example, curtailment – when more renewable electricity is produced than can be consumed – is often cited as a significant future challenge in the electricity sector due to the highly variable production from wind or solar. The gas lobby is keen to capitalise on this issue, by placing itself as a solution to this problem. Yet, the more efficient solution of expanding electricity transmission grids is hardly mentioned. The gas lobby is adamant that using renewables to produce gas is the best way to move energy and to justify continued expansion of gas pipelines. But making gas with excess renewables will inevitably be an expensive investment, since the facilities will only be running few hours a year, posing little threat to the production of fossil gas.

50 shades of gas: From fossil to greenwash; all roads lead to gas.

Gas today is almost entirely of fossil origin. “Natural” gas is only natural to the extent that coal is natural. The gas lobby has worked hard to distance itself from other fossil fuels, such as coal and oil, and to establish itself as reliable partner to the (by extension) unreliable renewable. 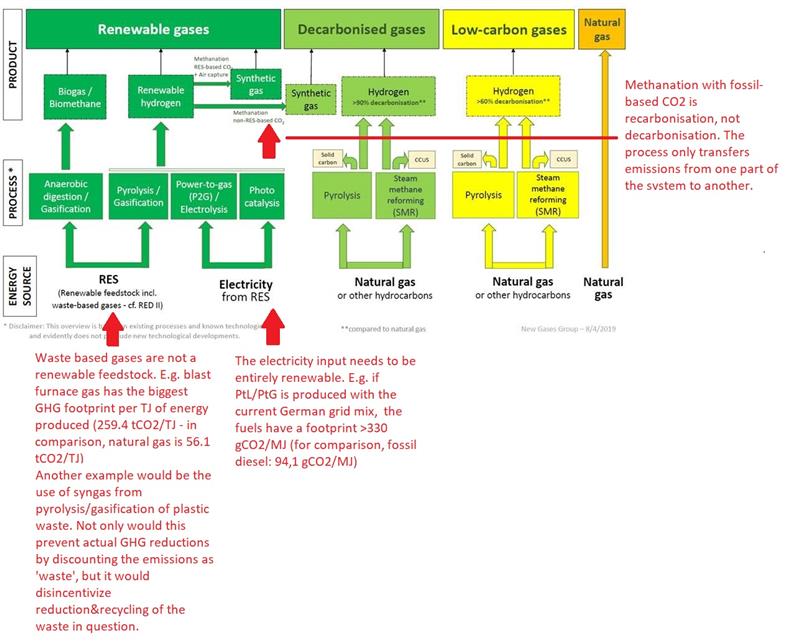 The gas lobby has illustrated a plethora of alleged solutions for it to remain a core element of the European net-zero economy. This has enabled the confusing and intentionally ambiguous use of the terms ‘gas’. In the context of energy, ‘gas’ has always the term for natural (fossil) gas. But the term now seems to comprise ‘methane’, and ‘hydrogen’, which are both respectively broken down into ‘non-decarbonised’, ‘decarbonised’, and ‘renewable’. The new garbled language has been produced to confuse everybody and justify the further development of already extensive gas infrastructure.

It is quite clear that building even more gas infrastructure will result in further consumption of fossil gas. If you build an expensive pipeline, you expect to use it. Until the foreseeable future, new and existing pipelines will be pumped with fossil gas. To obfuscate this, terms like ‘renewable’ and ‘decarbonised’ are thrown into the mix under the pretence that in future all fossil gas will be replaced with alternatives which can run in the same pipelines. The gas lobby seem to be working in a concerted effort to abuse of this method. The most recent press release from NGVA, one of the many gas lobbies in Brussels, (21 January 2020) deliberately confuses the terms “natural” and “renewable”. Here is a quote: “Natural and renewable gas is an available resource that can help to reduce CO2 emissions from new and existing vehicles.” This sentence is wholly misleading for several reasons since natural and renewable gas are two very distinct fuels, as illustrated in the lovely image above. Implying that they are one and the same, despite the unresolved complexities of ‘renewable gas’, is another sinister attempt to distinguish fossil gas from other fossil fuels.

While the concept of sector coupling gains in fervour by the day, it appears that the intentions behind it are rather disingenuous. The joint publication of the Ten Year Network Development Plan by the ENTSOs has shown that the interests of ENTSO-G dominate, to the detriment of ENTSO-E and the EU’s climate ambitions. It is evident that the deployment of renewable energy must be rapid and extensive. The monumental challenge of deploying enough renewable energy must not be compromised by these false solutions promoted by the gas industry. Deploying wide-scale electricity transmission infrastructure must be prioritised if we are to have any hope of meeting the EU’s net-zero target.

Despite the Ten Year Network Development Plan scenarios claiming to be Paris-compatible, the assumptions made on electrification seem to be on the low side of other scenarios which do not meet the decarbonisation target. The electrification of transport plays a minor role, despite the overwhelming research that suggests EVs can be used to add flexibility to the electricity grid. This point is not mentioned at any point in the report.  A deliberate attempt is being made to obfuscate the future gas mix by using misleading or confusing terminology, which serves only to provide ample room for unabated natural gas to continue on its path of destructive growth. While overall emissions in the EU declined in 2019, the growth in oil and natural gas emissions meant the reduction in emissions was slower than in 2018.  “[In a global context] the weak growth in carbon dioxide emissions in 2019 was due to an unexpected decline in global coal use, but this drop was insufficient to overcome the robust growth in natural gas and oil consumption,” said Glen Peters, Research Director at CICERO. If the gas lobby gets its way, the EU’s net-zero target will be an exercise in futility.

Our report from 2016 also looks at the dangers of sector coupling and why “power to liquids” is a trap. Read it here.