Russia to defend its interests in the Arctic

Published on July 11, 2013 by Anna Kireeva, translated by Charles Digges 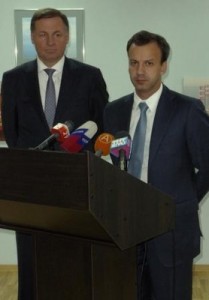 The group also discussed international cooperation in the hotly disputed area. Dvorkovich flew in from Moscow especially for the discussions.

One of the series of meetings was devoted to issues of implementing an agreement that was ratified in 2011 between Russia and Norway demarcating border between the two countries in the Arctic waters of the Barents Sea and the Arctic Ocean in the hopes of achieving better cooperation.

Dvorkovich said it was essential that Russia guarantee interdepartmental interaction for a full-scale realization of Russia’s Arctic interests.

“It is important not to lose the benefits that could be gained fro active work in the Russian Arctic,” he said, adding that the Murmansk Region would play an important role in this process.

“For opening, developing, studying and defending the Arctic, the Murmansk Region is one of the key regions as it is located at the very north of Russia,” said Dvorkovich at a press briefing. “We view the Murmansk Region as one of our outposts, as a base for conducting all of these types of activity. I won’t say that one region is more important than another, but nonetheless, specific traits of the region demand its development been seen as a priority.”

Touching on the subject of the ratification of the demarcation agreement regarding disputed Barents Sea territories, Dvorkovich noted that disagreements remain due to differing legislation in Russia and Norway, though said he hoped the hurdles of disagreement would soon be cleared.

The safety of work on the Russian continental shelf

The meetings participants focused on issues of opening oil and gas fields on the Arctic continental shelf, including the shelf in the Barents Sea. According to the head of the Federal Service for the Supervision of Natural Resource Usage (Rosprirodnadzor) Vladimir Kirillov, opening fields on the Arctic shelf is on of the most dangerous of business operations.

“Extracting and transporting raw hydrocarbon products is linked with the certainty of accidents and catastrophes at facilities for sea-based infrastructure for oil and gas fields at sea,” he said. “Abnormalities and accidents on the Russia’s continental shelf in the Arctic’s particular natural and climactic condition could cause irreparable damage to the environment and demand significant material and personal resources for the liquidation of such accidents and their consequences.”

Kirillov also pointed out that Russian law required governmental environmental impact studies to include plans for issuing warnings about spills and outlining plans to clean them up.

The lack of expert opinion for plans to liquidate spills of oil and petroleum products automatically precluded operations to open hydrocarbon recovery development in domestic waters, territorial seas and the exclusive economic zone of the continental shelf. Further, expert analyses already carried out take into account the presence of protected nature preserves in the proposed drilling areas.

Nevertheless, there are currently 11 open hydrocarbon fields in the Barents Sea, where five Russian companies are working. The biggest of these is the Prirazlomnoye field, which is operated by the GazpromNeftShelf consortium in which Russian state oil company Rosneft and the gas monopoly Gazprom share stakes.

Rosprirodnadzor has suggested an evaluation to determine the most vulnerable sectors of the ecosystem on the Barents continental shelf. Ice- class environmental protection vessels would conduct monitoring of the companies’ activities.

“The Russian government devotes a lot of attention to the issue of building a natural preservation fleet,” said Kirillov. “The construction of 20 vessels is planned, eight of which would be ice-class ships suitable for operation on the continental shelf and the Arctic Seas, which would allow [Rosprirodnazor] to fully carry out its supervisory role.”

According to Russian Federal Fisheries Agency head Andrei Krayny, Russia plans to boost its presence on the Spitzbergen Archipelago off northwestern Norway. Specifically, vessels from Murmansk’s search and rescue detachment would be based there constant basis.

This would be necessary for rapid first response to accidents and other extreme circumstances in the Barents Sea as the travel time to this area from Murmansk would take a minimum of three days.