Norway’s Statoil is backing off drilling projects in Arctic waters, announcing yesterday that it would delay its development of the Johan Castberg field located 240 kilometers north of Hammerfest due to unexpected new tax increases announced last month that deflate the attractiveness of the venture. 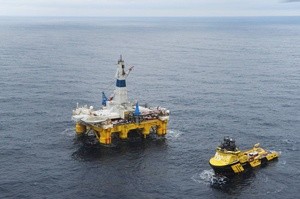 Statoil’s announcement Wednesday comes less than a week after Gazprom deputy chairman Andrei Kruglov said the Russian gas giant was abandoning its decades’ old plant to develop the Shtokman oil and gas condensate field in the Barents Sea to “a future generation.”

The delay in Statoil’s Arctic drilling puts the mostly state-owned company in line with other oil majors who have similarly announced delays in their own high north projects.

The postponements issue a stay of possible irreversible environmental contamination to the world’s most fragile ecosystems, and signal what is at least a temporary exodus of hydrocarbon recovery companies away risky Arctic drilling.

And though these delays for drilling in the Arctic have not come as a result of any ecological awakening among companies pursuing projects there, but rather cost overruns and safety and regulatory issues, Bellona greets the postponements with the hope that they will allow for a fundamental rethinking of Arctic drilling

The announcement of the delay at the Western Barents Sea’s Johan Castberg field – which consists of the Skrugard and Havis discoveries – is a special blow to the oil hunt in the Arctic, as the Norwegian Barents Sea is the one area that has been seen by oil companies as a drilling success.

Statoil executives say the Barents is considerably easier to operate in than coastal waters off Alaska or Greenland, where companies such as Royal Dutch Shell and Cairn Energy have spent billions of dollars with little or no progress, the Financial Times reported.

Statoil yesterday issued a statement blaming uncertainties both on the amount of resources and investment needed at Johan Castberg, estimated to contain 400-600 million barrels of oil.

Statoil had said it would cost about $15 billion to build a new oil hub on Norway’s north coast, deep in the Arctic Circle, to develop the field.

“The Norwegian government has recently proposed reduced uplift in the petroleum tax system, which reduces the attractiveness of future projects, particularly marginal fields and fields which require new infrastructure,” Øystein Michelsen, executive vice president of Statoil development and production in Norway, said in a statement.

“The updated project estimates and the new uncertainty in the tax framework has made it necessary to consider what consequences this may have for the development concept, Norway’s new taxes will limit the tax-deductible component of petroleum income, cutting the exemptions on free cash flow to 22 percent from 30 percent,” the Norweian government said on May 5, according to Bloomberg news agency.

The government will also raise its special petroleum tax to 51 percent from 50 percent, keeping a top tax rate of 78 percent. The measures will raise oil industry taxes by about 3 billion kroner ($517 million) a year, said Bloomberg.

Statoil is the operator of Johan Castberg with a 50 percent stake, Italy’s Eni own 30 percent and Petoro, wholly owned by the Norwegian government, holds a 20 percent share, the Financial Times said.

Shell, Total and others swear off Alaskan coast drilling for this year – others follow

As early as September 2012, Total CEO Christophe de Margerie said drilling in the Arctic may be too risky to the environment in what was the first time a major oil company publicly raised doubts about offshore Arctic oil exploration

Statoil spokesman Bård Pedersen had told Bellona in March that the company intended to drill nine wells in the Barents Sea this year, an announcement that dovetailed with a February announcement from Royal Dutch Shell that it would back off plans to drill Chukchi and Beaufort Seas off Alaska.

Shell’s decision to pause drilling was widely expected, following a laundry list of safety and regulatory problems that Shell encountered in 2012.

But Wednesday’s statement by Statoil’s Michelsen will cut into the company’s earlier announced plans. Statoil is currently drilling only four exploration wells in the area around Johan Castberg in order to provide additional resources to fortify potential future development of the field, the Barents Observer news portal reported.

Also in April, Statoil North America President Bill Maloney told reporters it was “taking a break in Alaska.” That announcement was followed by strong language from Lukoil, Russia’s privately owned oil company, that it “wouldn’t give a kopeck” toward Arctic oil exploration and development” because the risks were so high that profits would be outweighed by hazards.

Gazprom, meanwhile, last Friday explained its move away from Shotkman as an effort to focus more resources developing the Yuzhno-Kirinskoye field in the Sea Okhotsk on the shelf of the Far East Sakhalin Islands. That field holds between 137 and 260 billion cubic meters of natural gas, yielding a condensate extraction from 16 to 30 million tons, said the Russian daily Vedomosti.

Gazprom’s Kruglov said recovery in the Kirinskoye field, which are located only 90 kilometers from shore, could rival those expected from the Shtokman field, which is some 600 kilometers offshore.

The bonanza in American shale gas has also played a part in halting Shtokman development. Once a key prospective customer for Shtokman gas, the US and its shale gas revolution – which poses environmental risks of its own – has put the country in a position to supply its own gas and export it as well.

Gazrpom was due Thursday to comment on a board meeting concerning its redistribution of efforts to the Kirinskoye from Shtokman, but no news has yet emerged as of this printing.