MURMANSK – With the Arctic ice cover receding at alarming rates, freeing northern waterways to accommodate more sea-going traffic, Russia has been eager to start fully using the Northern Sea Route – a shipping corridor stretching along Russia’s vast northern coastline from the Barents Seain the country’s northwest past Siberia all the way to the Far East – for commercial shipping: passing legislation, restoring a dedicated state supervisory agency, building a new nuclear icebreaker, and allocating money for new Arctic-based search and rescue missions… But has anyone accounted for the ecological risks of increased Arctic traffic?

Published on March 7, 2013 by Anna Kireeva, translated by Maria Kaminskaya 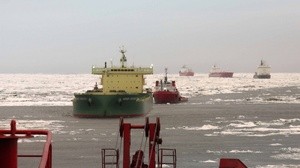 The bill governing the use of the Northern Sea Route – Federal Law No. 132-FZ – took effect just over a month ago, 180 days after it was signed by Russian President Vladimir Putin. Its full title is “On Amendments to Certain Legislative Acts of the Russian Federation Concerning State Regulation of Merchant Shipping in the Area of the Northern Sea Route.”

The law requires shipowners to hold compulsory civil liability insurance against damage resulting from pollution, or against any other damage caused by a vessel, or to be covered by other financial provisions against such liability. Absent of such a coverage, a vessel cannot call into or leave a port on the territory of the Russian Federation, nor can it obtain a permit for navigation in the waters of the Northern Sea Route.

The law defines the Northern Sea Route as the water area adjacent to the northern coastline and encompassing Russia’s internal sea waters, territorial sea, contiguous zone, and exclusive economic zone. On the east, this water area is limited by the demarcation line constituting the maritime boundary between Russia and the United States and the parallel of Cape Dezhnev in the Bering Strait, and on the west, by the meridian of Cape Zhelaniya to the Novaya Zemlya Archipelago, the eastern coastline of the Novaya Zemlya archipelago, and the western borders of the straits of Matochkin Shar, Kara Gates, and Yugorsky Strait.

This same law provides for the establishment of a Moscow-based federal state agency, the Northern Sea Route Administration. This will be the federal entity responsible for processing applications for, and issuing, permits granting shipowners the right to use the Northern Sea Route. The price will depend on the actual services rendered.

The Northern Sea Route, sometimes called the Northeast Passage, is the shortest maritime link between the markets of Northwest Europe and the Pacific region, and traffic along this route is growing each year.

Four transit voyages were already made along the Northern Sea Route in 2010, carrying 111,000 tons of cargo. In 2011, cargo shipments along the route increased seven-fold, reaching over 800,000 tons.

And in 2012, according to Vyacheslav Ruksha, head of Russia’s nuclear icebreaker operator Atomflot, over 2 million tons of cargo were moved along the Northern Sea Route waterways. Between 3 million and 5 million tons is expected to be shipped in 2013, and around 15 million tons by 2017. This expected boost in shipping traffic has less to do with global warming – which, too, has been rendering the area more amenable to maritime trade as the rising temperatures have affected the Arctic sea ice cover – than with the development of the Yamal LNG project.

Yamal LNG is a liquefied natural gas development venture in the Yamal Peninsula (Northwest Siberia), majority-owned by the independent Russian natural gas producer Novatek. The project envisions development of the South-Tambeyskoye gas condensate field and construction of an LNG plant, a sea port in the settlement of Sabetta, and an ice-class tanker fleet.  The first tanker shipment is expected to leave the port of Sabetta in 2016.

Last year, Novatek and Russia’s State Atomic Energy Corporation Rosatom went in on a contract that will see vessels servicing the Yamal LNG project receive Rosatom-provided icebreaker assistance on the Northern Sea Route for a period of no less than 15 years. Specifically, Rosatom’s icebreakers will assist shipments of construction materials during the construction of Yamal LNG’s field and port facilities. According to the deal, LNG shipments are expected to reach a level of 17 million tons by 2020.

The high hopes tied to the Northern Sea Route leave room for deep doubt as well. One gap yet to be closed between the ambitious plans and the existing reality is that Russia today lacks capacity for shipments of such scope. According to Rosatom’s Atomflot, the capacity of the icebreakers Russia currently has in operation is limited to around 8 million tons a year.

The economics of the expected trade are likewise open to debate. The route is certainly shorter than the traditional ones, but has one major economic drawback: No backhaul. No shipping company will want to undertake carrying cargoes to a destination if it expects a ballast voyage back, but will still have to pay for icebreaker escort regardless.

Furthermore, the comprehensive preparations needed to realize Russia’s extensive plans in the Arctic will have to involve not just expanding the icebreaker fleet but ensuring ecological safety and beefing up emergency response services in the area. This is stated, in particular, in Russia’s Arctic Development Strategy to 2020 (in Russian), recently signed by President Putin.

Last year, Russia’s emergency ministry announced plans to build and equip some ten full-service emergency response centers along the entire stretch of the Northern Sea Route, from Murmansk to Kamchatka. About RUR 1 billion ($32.5 million) has already been earmarked to this end.

Currently, stationed in the Russian polar region are four search-and-rescue squads and 65 firefighter and firefighter and rescue units numbering in total around 3,000 personnel.

Bellona’s oil and gas expert Sigurd Enge warns that the effects of global warming notwithstanding, ice cover should still be expected in the Northern Sea Route’s waterways for several decades yet.

“How much and where this ice will be [is] impossible to forecast more than [a few] days [or a] week in advance. So […] traffic in these areas [needs to be prepared to deal with] ice,” said Enge. “This means [costs of] icebreaker escort, unpredictable delays and risk of accidents and [spills] from fuel tanks and cargo [spills]. And of course, [navigation still cannot be] a year-round activity.”

Russia’s Napoleonic plans for commercialization of the Arctic shipping corridor are moreover a serious environmental concern because they will necessarily increase the ecological burden on an area already extremely vulnerable to the rapid changes brought on by climate change.

Air emissions from ships in the Arctic have a double climate effect, according to Enge. On top of the CO2 emissions, black carbon emissions will accelerate the melting of sea ice and snow in the Arctic region.

And as for shipping operations, increased traffic in the area will mostly likely translate into a higher risk of accidents and oil spills. According to Enge, the likelihood of an oil spill happening in these conditions is much bigger than in ice-free areas, especially for ships not built and certified specifically for ice conditions. The consequences of an oil spill in the Arctic will be enormous because of the fragile ecology and, furthermore, because the technology to clean up an oil spill in ice-covered areas is, in Enge’s words, “between non-existent and weak.”

But just what kind of toll a shipping accident might take in the severe climate of the Arctic – both in terms of environmental damage and the cost in rescue and cleanup operations – is something no one so far is prepared to assess.